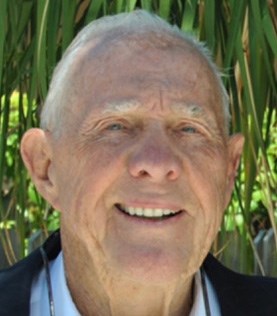 BORN
1932
DIED
2021
Bernard E. Healy Jr. of Fort Lauderdale, Fla., died August 25, 2021. He was a beloved husband, father, brother, grandfather, father-in-law and friend. Born June 21, 1932, in Quincy, Mass., Bernie was the son of Emelie M. (Marchant) and Bernard E. Healy Sr. He grew up in Weymouth, Mass., and graduated from Weymouth High School, where he excelled in basketball, baseball, and football. He graduated from Massachusetts Maritime Academy, where he lettered for four years in basketball, baseball and football. Afterwards, he worked as an officer of U.S. Steel Shipping, where he received his master's license. Thereafter, he worked as a construction Project Manager and General Superintendent, overseeing the building of shopping centers all over the Northeast. He then attained his M.B.A. at Northeastern University which led him to form his own construction company, Healy Construction, that built over 70 shopping centers throughout New England. Eventually, starting a Real Estate Development firm, Healy-Smith Development, in Dedham, Mass. Bernie was the ultimate storyteller, never letting the truth get in the way of a good story. He made friends wherever he went, usually with a bartender. Most knew him as the comedian in the crowd. He had a rare knack of always looking at the bright side of a situation and searching for laughter throughout his day. He was an avid golfer and yachtsman, all while enjoying the warm weather, he absolutely hated the cold. Always citing that his main reason for going to the Maritime Academy was because the shipping lanes were in the tropics. Family and friends will always cherish the memories of many adventures sailing down and up the east coast from Boston to Florida. When not sailing he could be found on the golf courses of Florida and his summer home in Hales Location, N.H. Bernie is survived by his wife and best friend, Julie, and their children, Jillian and Brett of Fort Lauderdale, Fla., and his three children, Michael D. Healy of Boston, Cheryl A. Healy-Hayford and her daughter, Nicole, of Braintree, Mass., and Mark D. Healy, his wife Rachel, and their children, Kate and Dolan, of Marshfield, Mass. Bernie was predeceased by his parents, Emelie and Bernard of Weymouth, Mass., and his two brothers, Ted of Shrewsbury, Mass., and Monty of Duxbury, Mass. He is also survived by many nieces and nephews. An intimate celebration of Bernie's life with immediate family will take place in the weeks to follow.
Published by The Patriot Ledger on Aug. 31, 2021.
To plant trees in memory, please visit the Sympathy Store.
MEMORIAL EVENTS
To offer your sympathy during this difficult time, you can now have memorial trees planted in a National Forest in memory of your loved one.
MAKE A DONATION
MEMORIES & CONDOLENCES
1 Entry
"Uncle Bernie" was always entertaining and extremely generous. He was always quick to grab the tab. I enjoyed playing golf with him and had many laughs with him and Mark. My condolences to his family and my cousins. R.I.P Bernie
Sean Rizzo
September 1, 2021
Showing 1 - 1 of 1 results