Roy F. Rizzi
Roy F. Rizzi BRAINTREE Roy F. Rizzi, Lieutenant, Quincy Fire Dept., Retired, age 81, of Braintree, formerly of Quincy, died peacefully, surrounded by his loving family, Friday, August 14, 2009 at the Sunrise Assisted Living in Braintree. He was born in Quincy, raised and educated in Quincy schools and was a graduate of Quincy Trade School. He has lived in Braintree for two years, previously in Quincy for all his life. He was a longtime parishioner of Saint Mary s Church in West Quincy. Mr. Rizzi was a retired Quincy Fire Lieutenant. He was appointed to the department on June 19, 1954, promoted to Lieutenant on May 12, 1973 and retired in 1992 after thirty-eight years of service. He began his career on Engine 2 and worked with various engine companies throughout the city. At the time of his retirement he was with Engine 6 in Houghs Neck. Firefighting was a tradition in the Rizzi family as Roy s late father, Joseph, was a retired Quincy Fire Captain and his late brother Walter was a Quincy firefighter. He was a member of Local 792 and the Quincy Firemen s Relief Association. Roy served in the U.S. Navy as a Seaman 1/c during World War II on the U.S.S. Prentiss and the U.S.S. Sarsfield. During the Korean War he served in the U.S. Army and received the Korean Service Medal with one Bronze Service Star. He served in the 7 th Division and participated in the amphibious landing at Inchon in the fall of 1950. Roy was also an electrician. He enjoyed sports was an avid Red Sox and Bruins fan. He was a family man, devoted to his wife, his seven children and especially to his twelve grandchildren. Beloved husband for fifty-eight years of Beverly A. (Mills) Rizzi. Devoted father of Steven R. Rizzi and his wife Linda of Lowell, Lynne P. O Dea and her husband Robert of Quincy, Alan J. Rizzi of Hudson, John F. Rizzi and his wife Christine of Quincy, Lisa M. Shanahan and her husband Timothy of Falmouth, Laura L. OConnor and her husband Michael of Weymouth, Donna M. Peavey and her husband Glen of Weymouth. Loving grandfather of Steven, Jamie Lynn, Eric, Brian, Samantha, Sarah, Emma, Holly, Kerry, Caitlin, Kyle and Taylor Ann. Brother of Arthur Rizzi of Randolph, the late Walter Rizzi, Q.F.D. and the late Dorothy Boyle. Brother-in-law of Evelyn Hynes of Quincy and Patricia McDonald of Braintree. Funeral from the Sweeney Brothers Home for Funerals, 1 Independence Avenue, Quincy, Tuesday, August 18 at 9:15 am. Funeral Mass in Saint Mary s Church, 95 Crescent Street, West Quincy at 10 o clock. Relatives and friends are invited to attend. Visiting Hours Monday 48 pm. Interment with Military Honors at Blue Hill Cemetery, Braintree. For those who wish, donations in Roy s memory may be made to Quincy Firemen s Relief Association, c/o Q.F.D., 40 Quincy Avenue, Quincy, MA 02169 or to the Norwell VNS/Hospice, 91 Longwater Circle, Norwell, MA 02161.
Published by The Patriot Ledger on Aug. 15, 2009.
To plant trees in memory, please visit the Sympathy Store.
MEMORIAL EVENTS
To offer your sympathy during this difficult time, you can now have memorial trees planted in a National Forest in memory of your loved one.
MAKE A DONATION
MEMORIES & CONDOLENCES
29 Entries
To the Rizzi Family,
I was so sorry to hear of your loss. Just to let you know that thoughts are with you at this time.
brenda bersani
September 1, 2009
To the Rizzi family.I just heard of your loss .I,am sorry ,Roy was a good guy.

Bill Daley
August 21, 2009
Dad, I learned a lot more about you in just a few short days.I just finished having the hardest day in my life ,and yet the proudest day of my life.We just layed you to rest and I had the honor of writing and reading your eulogy.I told people what they already knew though,But it felt good coming from my mouth.I told you alot of times thease past two weeks that I loved you,but i still wish I had told you more.I'm missing you already dad. I'll be looking at your pictures everyday wishing you were still here ,but knowing your finally resting peacefully and painlessly .To repeat what I said in my eulogy, eighty two years was just not enough time.Happy birthday dad,I love you
steve
August 19, 2009
The Wipfler Family is so proud to be related to you. I am proud to be related to you. You are a war hero, a Bronze Star winner, a Navy and Army Veteran from two wars...WWII and Korea, and fought at Inchon. You are a respected and admired Firefighter who inspired my own brother to join and serve in your former Station. My latest memory of you is at my brother Mark's Indoctrination Ceremony to the Quincy Fire Department and feeling the Pride that he was part of a Legacy. Your Legacy. You are a loved and respected man and hold an honored place in the hearts of those who were lucky enough to have known you.
Eric Wipfler
August 18, 2009
Dad, this is going to be one of the hardest weeks in our lives but we are comforted in knowing that you are no longer in pain and suffering. You have been through so much over the years and never ever complained! You are one of the strongest people I have ever known and we will miss you dearly. I am very proud to have you as my dad and Caitlin & Kyle's grandfather. I Love You!!!
Laura, Mike, Caitlin & Kyle
Laura O'Connor
August 18, 2009
We have missed Roy at the firehouse since his retirement from QFD. The retirement banquet won't be the same without him. My condolences and prayers to the family.
Steve Sweet QFD
August 17, 2009
To Lisa and Family,

We are all sorry to hear of your father's passing. He was a great man who served his family, community and country with integrity. Bless you all.

Our thoughts and prayers are with you and your family during this difficult time.

Tracy & Caitlin
The Yannizzi Family
August 17, 2009
To the Rizzi Family,

We have always known what a close family you have. This is a testament to your father's love and a legacy that lives on with all of you. Our thoughts and prayers are with all of you.
The Condons
August 16, 2009
To our extended family The Rizzi's: We are so sorry and send our deepest sympathy in the passing of Roy. He was a great man as well as loving husband,father,grandfather and friend. He fought the battle every day and never gave up. Please take comfort that he is with mom now and together they will watch over all of you. Love always, The DesRoche,Anderson and Ferguson families
Kerry Ferguson
August 16, 2009
I wish I could find the proper words to express my love, respect and gratitude to Roy and your entire family. Every time I picture Uncle Roy, I find a smile on my face and warmth in my heart. The closeness and unity the entire Rizzi family has for each other is a testament to the love and great character of your parents. It has been and always will be the goal I hold for myself and my family. As always, we are all honored by his presence in our lives.

Much love to you all,
Bernice & Jack Wipfler and family
August 16, 2009
John and Family,
I am so sorry for the loss of your Dad. I pray that all the love and wonderful memories you have will bring you peace and comfort in the time to come.
Sincerely,
Barbara Buckley-Fisher and Family
August 16, 2009
dear mrs. rizzi and family,
my deepest sympathy to you and all of your family.
my deepest respect to roy for his dedication to our country for his military service and also for his fire service to the citizens of quincy.
i always would see roy at the fire retirement banquets and at the firefighter's memorial sunday. truly a dedicated man.
sincerely,
doug menz.
(son of the late retired deputy chief john r. menz)(brother of deacon jack menz)
August 15, 2009
Our deepest sympathy to all of you for your loss.
Paul & Kerri
Kerri O'Connor
August 15, 2009 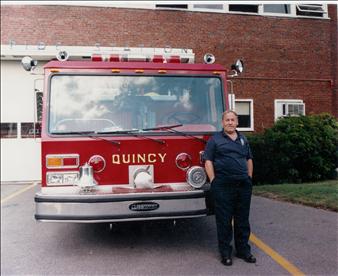 August 15, 2009
Beverly and family,
I just want to convey again my deepest sympathy to you and your family. I have really grown to love you and Roy over the last two years.
It was such a pleasure to take care of Roy. He always made me smile. I am so grateful that I could be a witness to the love that you an Roy had for eachother. You are two very special people who raised an amazing family. If we could all have what you had the world would be a better place. My thoughts and prayers are with you and your family in your time of grief. We will miss Roy at Sunrise. He may be gone, but he will never be forgotten! Your memories will keep Roy alive in all of your hearts.
Christine Murray
August 15, 2009
To the Shanahans and the Rizzi family,
Our prayers are with you. We have memories of Mr. Rizzi waiting on our swingset for his granddaughters to get off the bus. He sure loved his grandkids!
Tom, Robin, Tommy and Rachel Hurst
August 15, 2009
My deepest sympathy to the entire Rizzi family. My thoughts and prayers are with you all.
Kathy Doyle
August 15, 2009
My thoughts and prayers are with you in your time of grief. May your memories bring you comfort.
ED AND DONNA RIZZI
August 15, 2009
Lt. Rizzi,
Sir, I would just like to say thank you for your years of dedicated service and sacrifice-first for our Country when you served during WW II and the Korean War and secondly for the citizens of Quincy when you served with the QFD. And to your family and loved ones, I wish to extend my deepest sympathy.

Fair Winds And Following Seas
Mike Casey
August 15, 2009
Mom,
We are very sorry for your loss you were the perfect match and took great care of dad, we will be here for you and love you very much.
Love Glen,Donna and Taylor
Donna Peavey
August 15, 2009
To Al,Laura and the rizzi family, my sincere and deepest sympathy in this sad time.I had the honor of meeting MR.Rizzi in the presence of his son Al.He was a devoted family man with a heart of gold.May he rest in peace.
Glenn and Tracy McCarthy
August 15, 2009
Showing 1 - 29 of 29 results