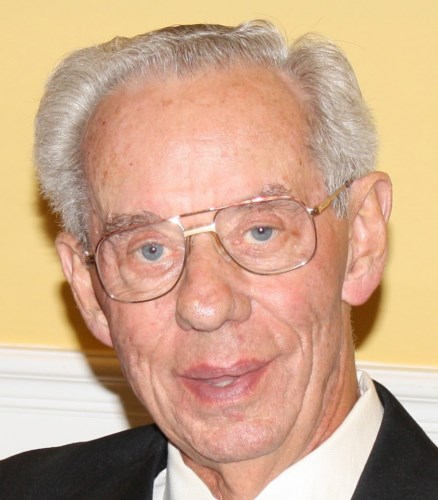 BORN
1928
DIED
2021
FUNERAL HOME
National Cremation and Burial Society Sarasota
2990 Bee Ridge Road
Sarasota, FL
Russell S. White, 92, of Venice, Fla., formerly of Sharon, Mass., passed away on July 14, 2021. He was born in Sturdy Memorial Hospital, Attleboro, Mass., on October 9, 1928, the son of Sidney R. White and Ina A. Simmons. The family lived in North Attleboro, Mass., until 1942 when they moved to Sharon, Mass. Russ had completed 8th grade by then, and started 9th grade in Sharon High School that September. He graduated from Sharon High School in the Class of 1946, the same Class that Edie was in. He enrolled in RPI (Rensselaer Polytechnic Institute), Troy, N.Y., that fall, graduating in June 1950 with a degree in Management Engineering. In July 1950, he started work with the Foxboro Company in Foxboro, Mass., remaining with them until he retired in June of 1985. He was a member of the Blue Hill Masonic Lodge A.F. & A.M. of Canton, Mass. Beloved husband of the late Edith M. (Nowers) White with whom he shared 70 years of marriage, having been married on November 25, 1950, in the First Congregational Church of Sharon. Surviving family members include four children, daughter Carol Jones and husband William of Valrico, Fla., son David and wife Evelyn of Haverford, Pa., son Steven and wife Kristine of Hoschton, Ga., and daughter Susan Mitchell and husband Jon of Plantation, Fla., as well as six grandchildren and seven great-grandchildren. A celebration of life will be held at 10 a.m. on Saturday, August 28, in the Venice United Church of Christ, 620 Shamrock Blvd., Venice, Fla., followed by a reception in Naar Hall. All are invited to attend. The service will be streamed live via the VUCC YouTube channel. Funeral arrangements are by the National Cremation Society. His ashes will be placed in the White family plot in Plainville Cemetery, Plainville, Mass., at a later date. If desired, gifts in Russ's memory may be made to the Endowment Fund of the Venice United Church of Christ, 620 Shamrock Blvd. Venice, FL 34293 or to the Endowment Fund of the First Congregational Church of Sharon, 29 North Main Street, Sharon, MA 02067.
Published by The Patriot Ledger on Jul. 31, 2021.
To plant trees in memory, please visit the Sympathy Store.
MEMORIAL EVENTS
Aug
28
Celebration of Life
10:00a.m.
Venice United Church of Christ
620 Shamrock Blvd, Venice, FL
Funeral services provided by:
National Cremation and Burial Society Sarasota
MAKE A DONATION
MEMORIES & CONDOLENCES
Sponsored by National Cremation and Burial Society Sarasota.
0 Entries
Be the first to post a memory or condolences.