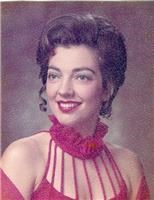 BORN
1938
DIED
2017
FUNERAL HOME
The J.F. Floyd Mortuary - Greenlawn Chapel
2075 East Main Street
Spartanburg, SC
Janice Hudson Janiec
SPARTANBURG, SC-- Janice Hudson Janiec, 79, of Spartanburg, SC, died Wednesday, May 31, 2017, at Summit Hills Retirement Community. Born May 16, 1938, in Charlotte, NC, she was the daughter of the late W. R. and Blanche Foard Hudson.
An elegant human being with a heart of gold and a fighter's spirit, she loved her daughters, doted on her sons-in-law, and adored her grandchildren beyond all words. She had a glorious smile, a transcendent laugh, and fantastic sense of humor. Her daughters found it best to clear their schedules when running errands with her, because Ms. Janiec knew at least five people everywhere she went, and each one of them wanted to chat or give her a hug. Even animals loved her, and the shyest pets would come out from under beds or behind closed doors to greet her when she walked into a room.
Ms. Janiec was perhaps best known for her vocal abilities – both her talents as an opera singer and her abilities as an all-around performer. Along with being a professor and choral conductor, Ms. Janiec sang for years in the choir at the Church of the Advent, in the Greenville Chorale, conducted many different church choirs, and performed recitals all over the Southeast. Over the course of her career, she performed lead roles in over 30 musical productions, gracing the stages of the Charlotte Opera, Spartanburg Little Theatre, Brevard Music Center, Converse College, and USC Upstate. Her last public performance was in "Divas and Dames – 65 Years of SLT (Spartanburg Little Theatre)" in 2011.
She was an undergraduate student at Converse College and taught on the voice faculty for many years. She graduated from Queens College in Charlotte in 1959 with a BA in music, and in 1984, she completed her Master's Degree at Winthrop College in Rock Hill, SC in Music Education and Performance. She retired as an Associate Professor of Music in the Department of Fine Arts and Communication Studies at USC Upstate, where she taught from 1986 until 2008. She also taught at many other institutions, including Wofford College, Furman University, Presbyterian College, the Brevard Music Center, various elementary schools in Spartanburg, and East Mecklenburg High School in Charlotte, NC. Throughout her life, Ms. Janiec received many awards and accolades, including a Service Award from USC Upstate and a Career Achievement Award from the Converse College Alumnae Association.
A native of Charlotte, Ms. Janiec came to Spartanburg in 1961 and was given an opportunity to perform in The King and I at Spartanburg Little Theatre. Several years later, she was cast as Eliza Doolittle in Brevard Music Center's production of My Fair Lady, later reviving the role in an eight-night, standing-room-only run at the Spartanburg Little Theatre in 1964. In an article in the April 24, 1992 edition of The Spartanburg Herald-Journal she stated, "In my ideal world, at 8 p.m. every night, the lights in the theater would come on, and I would be in the spotlight, wearing false eyelashes and a beautiful gown. I love theater and opera - it's the theatrical part I enjoy most. I guess that's really why I teach, so I may indulge in music." Her family can only imagine the entrance she made when she walked through the pearly gates.
Survivors include daughters, Barbara "Bobbie" Rafferty (Patrick) of Chicago, IL and Katherine "Trina" Janiec Jones (Jeremy) of Boiling Springs, SC; grandchildren, Erin Rafferty, of Chicago, IL, Sean Rafferty of Indianapolis, IN, and Molly Jones of Boiling Springs, SC; brother, Warren Hudson, of Dallas, TX; and her loving (and much-loved) caregivers at Summit Hills, Comfort Keepers, and Pathway Hospice.
Visitation will be 6:00-8:00 PM Sunday, June 4, 2017 at Floyd's Greenlawn Chapel, 2075 East Main Street, Spartanburg, SC 29307. Funeral services will be conducted at 2:00 PM Monday, June 5, 2017, at The Episcopal Church of the Advent, by the Rev. J. Edward Morris and the Rev. Deborah D. Apoldo. A reception will follow in the church Parish and Community Life Center. Burial will be at 11:00 AM Tuesday, June 6, 2017, in Sharon Memorial Park, 5716 Monroe Rd., Charlotte, NC 28212.
In lieu of flowers, memorials may be made to Converse College, Office of Philanthropy, 580 East Main Street, Spartanburg, SC 29302 www.converse.edu; The Spartanburg Little Theatre, 200 East St. John Street, Spartanburg, SC 29306 www.spartanburglittletheatre.com; or The Episcopal Church of the Advent, 141 Advent Street, Spartanburg, SC 29302.
An online guest register is available at www.floydmortuary.com
Floyd's Greenlawn Chapel
Published by Spartanburg Herald-Journal on Jun. 4, 2017.
To plant trees in memory, please visit the Sympathy Store.
MEMORIAL EVENTS
Jun
4
Visitation
6:00p.m. - 8:00p.m.
The J.F. Floyd Mortuary - Greenlawn Chapel
2075 East Main Street, Spartanburg, SC
Jun
5
Funeral service
2:00p.m.
The Episcopal Church of the Advent
SC
Jun
6
Burial
11:00a.m.
Sharon Memorial Park
5716 Monroe Rd, Charlotte, NC
Funeral services provided by:
The J.F. Floyd Mortuary - Greenlawn Chapel
MAKE A DONATION
MEMORIES & CONDOLENCES
Sponsored by The J.F. Floyd Mortuary - Greenlawn Chapel Floyd's Greenlawn Chapel.
1 Entry
Mrs. Janiec was the best professor I had while enrolled at USC-Upstate...She was an angel at all times at taught me things in voice and chorale that I still use today and tell both of my children about how to "Breathe". She was as beautiful on the inside as the outside. I will miss seeing her at Publix...for our 45 minute conversation and hug.
Cathy Hall
June 5, 2017
Showing 1 - 1 of 1 results