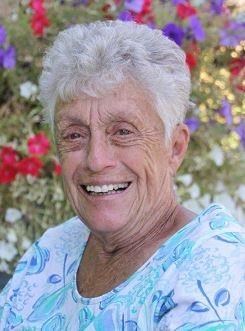 Evie Pariseau, age 89, passed away on June 30th, 2021. She was born in Seattle to Vern and Jane Farnham, and lived in Skykomish as a child. The Farnhams bought a grocery store in Kittitas, and Evie graduated from high school there. She met her life-long love, Ed Pariseau, at Kittitas High. She and Ed graduated from Central Washington College of Education (now CWU), where she majored in PE and minored in music.

Evie's first job was in Tonasket, where she and Ed taught for many years. She taught Girl's PE for all grades from 5th through 12th and was a pioneer in girls sports. Before Title IX, she organized inter-school competitions for girls in basketball (one of the first to transition to 5-man teams) and speedball (a soccer variant). "Mrs. P" coached very successful teams in Okanogan County tournaments: badminton and volleyball chief among them. She loved gymnastics and spent her own time and money driving girls to competitions in the Tri-Cities and elsewhere, and to Olympic-level gymnastic performances in Seattle. Rather than complain about how girls sports were neglected, she put her shoulder to the wheel and got things done.

Evie was an accomplished pianist. She gave piano lessons and accompanied many music ensembles in Tonasket. When Sacred Heart Church in Brewster got a piano, she played for masses there; she didn't care for playing the organ.

When it was time to pivot to full-time orcharding, having planted their first orchard in the early 60's, Ed and Evie left teaching in Tonasket and moved to Brewster in 1971. She became a proficient bookkeeper on the job, doing books for the orchards and warehouse until retiring in 2009. She was "the little general" during apple harvest, walking the orchards and checking pickers. She provided chicken dinner for all the crew every Sunday until the operation got so big, it was impossible. She absolutely adored the Mexican people who worked for them. For many years, she visited the families at their homes in Mexico, and it was a highlight of her life to do so.

In the "basketball years", when Brewster Heights Packing was sponsoring the 5-time National Champion Packers, an AAU team for post-college players, Evie was avid fan and "Team Mom". She travelled with the Packers to basketball tournaments all over the world: Brazil, Hong Kong, Ireland, Singapore, and Lewistown, Montana to name a few. She was ejected from a gym only once. Her Spanish was a little too good…she insulted the referee in his own language and he didn't appreciate it. Her basketball years continued with granddaughter Reagan and grandson Danny both playing college basketball. She and Ed caught almost every game they played, driving all over the West.

In 2019, she moved to Touchmark in Spokane to be near family. She very much enjoyed being taken care of and always spoke highly of the staff.

The Mass of Christian Burial will be celebrated at Sacred Heart Catholic Church in Brewster, WA at 11 am July 17th. A Memorial Celebration, also in Brewster, will be held on August 21st, details to be determined later.

If you have any thoughts and memories for the family please share them online at www.barneschapel.com. Services are entrusted to Barnes Chapel of Brewster.
Published by Spokesman-Review on Jul. 11, 2021.
To plant trees in memory, please visit the Sympathy Store.
MEMORIAL EVENTS
Jul
17
Mass of Christian Burial
11:00a.m.
Sacred Heart Catholic Church
Brewster, WA
Aug
21
Celebration of Life
Brewster, WA
Funeral services provided by:
Barnes Chapel -Brewster
MAKE A DONATION
MEMORIES & CONDOLENCES
2 Entries
I am so very sorry for the terrific loss of your beautiful mother. I loved her. She was my Freshman English teacher as well as my gym teacher. I loved her classes so much and her way of teaching. I also loved the way she took a personal interest in her students. She is one I will always remember. My heart aches for your loss.
Vonnie Anderson
School
July 11, 2021
I was from the graduating class of 1960. Mrs. Pariseau was one of the great teachers at Tonasket High. When you came to Tonasket as a new P.E teacher I loved how she "connected" with all the girls. She was firm, yet there was that soft side... I always think of her when I go to Tonasket to visit. "Thank you for being such a friend". You will be missed, Evie
Nancy Whittington Moore
School
July 11, 2021
Showing 1 - 2 of 2 results