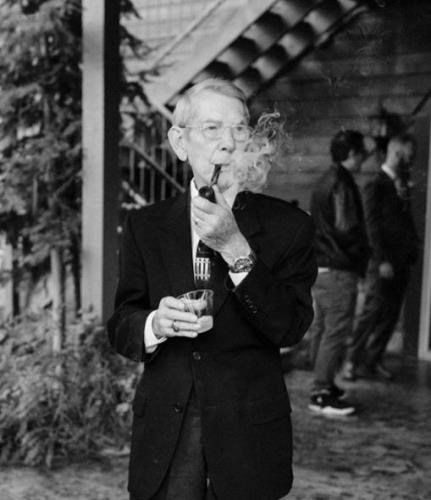 Donations can be made to John's Favorite Charity: Anyone who needs help; with no acknowledgement expected

John was born the second of four children to Ralph Emerson and Gertrude (Rogers) Devaney in San Antonio, Texas. He was preceded in death by both of his parents and his loving wife Barbara (2005). He is survived by his older sister Ann Toronjo, younger sister Sue Francis and brother Major Michael Devaney, all of San Antonio, his three sons Roger, Trevor and Cedric, grandchildren Tara, Lindsey, Caitlin, Abigail, Madelynn and Brennan, and great grandchildren Brooke, Grant and Barbara.

John has been a resident of the Okanogan valley since 1988 when he and Barbara purchased their ranch at the base of Pogue Mountain and built their dream home together. This was to be their forever home when they retired from their Aerospace testing Lab in the Los Angeles area, but fate intervened and they ended up moving their business to Spokane in 1992 and commuted back and forth every week since then. John and Barbara were both very active parishioners at Our Lady of the Valley Catholic Church in Okanogan and helped to remodel it several times.

John lived a life of incredible consequence in both his personal and professional aspects. John was raised as an "Army Air Corps Brat"; John's father Ralph served as a refueling specialist throughout WWII which required frequent reassignments. As a result, John lived in over 20 communities before the age of 18, but luckily ended up in Victoria, TX for high school where he met, fell in love with, and married Barbara Ann Shiller during his last year in college (1960).

He was a wonderful husband and father to his family, wearing many hats ranging from scoutmaster for two different troops for a total of over 10 years, a soccer coach and youth mentor! John loved reading literature and history, and encouraged that in his children and grandchildren, even reading aloud the entire Hobbit and Lord of the Rings trilogy to his sons. He taught his sons carpentry, plumbing, electrical and auto mechanics so they could be self-sufficient. John also spent many days and weeks helping with local church and school activities, and often took his sons with him to teach them the value of community service. John was a man of great faith and integrity his entire life and engrained that into his sons. In recent years, John was also a huge supporter of the Omak Stampede annual rodeo, and would personally sponsor housing for all of the visiting royalty.

John was accepted into the Physics program at Texas Tech after high school and graduated with honors with his BS in 1961. His first job was working on the Atlas missile program for Autonetics Corp. in Downey, CA where he performed failure analysis on all types of electronic components and became very good at it. He was then hired to work in the failure analysis lab for Texas Instruments in Richardson, Tx in 1963 and gained a reputation for excellence. In 1966 he was recruited by NASA's Jet Propulsion Labs (JPL) of Pasadena, CA to work in their prestigious lab supporting the Apollo programs. When JPL acquired their first Scanning Electron Microscope (SEM) John took to it immediately and rapidly became one of the world's foremost experts in its application and operation. He was the first to examine samples of moon rocks after Apollo 11, solve a murder case using the SEM, and even to examine the Syphilis virus! He hosted numerous workshops, wrote papers and trained many others in his expertise. As the Apollo program wound down in the early 70's John was getting restless at JPL so he took a job with a fledging startup called Hi-Rel Laboratories in San Marino, CA. Hi-Rel was started by Ed Metcalf, grandson of Henry Huntington, to examine and verify the authenticity of rare coins. This business model did not work out, so John began using the Lab to perform failure analysis services, which quickly took off as he used his contacts and experience from the aerospace world to grow the lab from 5 employees to 25 and added Destructive Physical Analysis (DPA) services to their repertoire. John became president of Hi-Rel and eventually purchased the business in 1984. Throughout this time all three of his sons were given the opportunity to work at Hi-Rel (starting as janitors!). John also became a patron of Don Bosco Technical Institute by hiring many of their 5th year students to work at the Lab during their Co-Op program, with all his sons also attending Bosco. John continued to run the Lab with the help of Barbara and would publish numerous technical papers. He also authored a book on Electronic Failure Analysis and began to teach hands-on training seminars along with long-time friend and colleague Howard Dicken for over 30 years.

In 1992, John moved the entire Lab and its employees to Spokane to keep it from going under during the recession. The Lab struggled for several years but then really took off as the only private Lab approved to work on parts for NASA's Space Station Program. All of John's sons worked for the Lab and he and Barbara sold it to them in 2003. John continued on at the Lab as technical expert and consultant until the Friday before his death. John had mentored hundreds of young men and women into choosing the engineering and electronics fields and is respected and loved by many.
Published by Spokesman-Review on Oct. 17, 2021.
To plant trees in memory, please visit the Sympathy Store.
MEMORIAL EVENTS
Oct
21
Rosary
6:00p.m.
Our Lady of the Valley Catholic Church
2511 N. Elmway, Okanogan, WA
Oct
22
Mass of Christian Burial
11:00a.m.
Our Lady of the Valley Catholic Church
2511 N. Elmway,, Okanogan, WA
Funeral services provided by:
Precht-Harrison-Nearents Chapel
MAKE A DONATION
MEMORIES & CONDOLENCES
2 Entries
To the Devaney Family, On behalf of the Bosco Tech community, we offer our deepest sympathy and condolences. Our school has been forever impacted by the good works, support and generosity of John Devaney. We are extremely grateful for John and the Devaney family. The Salesians will be offering their daily mass with specific intentions and remembrance for John. May he rest in peace. God Bless
Memo Gutierrez
Other
October 26, 2021
So sorry to hear about the passing of John Devaney. He was an inspiration to all and a very good teacher. May God bless your family in this time of grief.
Michael Defrancis
October 19, 2021
Showing 1 - 2 of 2 results