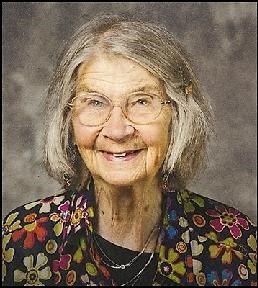 Many referred to Marion as Spokane's "mother of feminism." She enters the annals of history as an "Activist Extraordinaire."

Marion is possibly best remembered as the owner and operator of the "Past-time Feminist Book Store" in downtown Spokane from 1973-1977. The store was "more than a book store" and offered a lifeline to many women and men during turbulent times of social change in America. It served as a resource center of enlightenment and consciousness raising.

Marion was born on December 12, 1923 in the West Central neighborhood of Spokane to Clifford and Hilda Allen.

Marion attended Irving Grade School and graduated from Lewis and Clark High School. Her mother Hilda, was a Canadian. She moved to Tacoma as a young woman. She served as an American Red Cross World War I Army Nurse. Hilda was a Christian Scientist. Her family had been early pioneers in Victoria, BC.

During the Revolutionary War, her family remained English Loyalists. One of her great (six) grandfathers, a Sea Captain, was shot and killed by the Whigs on his was home from leave in 1779. His daughter Chloe escaped to Canada. Her grandmother, Sarah Matilda, was born under the British flag in 1851 in San Francisco Bay.

Her father Clifford, was a railroad man. Having a job during the Great Depression was critical. He traveled frequently on the Northern Pacific Railway. He was a Wells Fargo and Railway Express Agency route agent, meaning he checked books and records on the early Railway routes express mail. His ancestors were Oregon pioneers, having crossed the Oregon Trail in 1850, to settle in the Willamette Valley. The Leggets traveled on the ill-fated Meek Cut Off wagon train in 1845. They barely survived the "Terrible Trail", lost in the deserts of Eastern Oregon.

Marion attended WSU in 1942. She pledged the Chi Omega Sorority. She earned a BA in sociology. In 1947, one week after she graduated, she married Gene Moos. He was in the Lamda Chi Fraternity. They took over his family's wheat farm in Edwall, and farmed for the next 28 years. They raised two daughters, Angela and Virginia. In 1974, Marion and Gene went their separate ways. Marion moved to Spokane. Gene went to DC and became a staff analyst on the U.S. House Agriculture Committee, working for its Chairman Congressman Tom Foley.

Marion's social activism began as a member of the Edwall Methodist Church. She joined the Women's Division in 1955. She traveled to New York City for a conference. She wandered into Bella Abzug's campaign office, and it was then that she began to realize the importance and possibilities for women's empowerment.

Marion was an important figure in Spokane since the mid 1970s to the end of the last decade. She testified at hearings, passionately fighting for the rights of others, while serving on several boards and commissions.

She was instrumental in founding the Spokane Chapter of NOW (National Organization for Women) in 1972. She sold her bookstore in 1977, and ran the YWCA's Women's Resource Center while also serving on the Y's board. She was the founding leader of the OWL (Older Women's League) and the ACLU.

Marion also participated in the area for Ageing and Long Term Care of Eastern Washington, the NAACP, the Washington Environmental Council, The Peace and Justice Action League, The AARP, and The Founders Circle of Women Helping Women. Marion was a leader in the establishment of The City of Spokane Human Rights Commission in 1992.

In Martin Luther King's words, Marion was "a cheerleader for justice." She cared passionately about equality, social justice, civil liberties, and a woman's right to choose.

As a young woman on the farm, Marion hosted many bridge parties in Edwall for friends. In Spokane, friends and acquaintances attended her annual Christmas Party. She baked dozens of cookies and served her "sinfully rich" eggnog. There was always great merriment and laughter at her parties.

Marion's exuberance in life, and her secret to longevity was that she possessed an "athlete's heart". She swam laps for 45 minutes several times a week into her early 90s at Comstock Pool on the South Hill.

Marion traveled extensively. She went to China twice, Japan, Russia, Turkey, Greece, Mexico, Germany and Austria, where she visited relatives. She emerged from her travels in good spirits, ready to re-engage as an "Area woman, out performing daring deeds!"

Marion is survived by her daughters, Angela and Virginia; her granddaughter Jamie; and her god daughter, Gail. She is preceded in death by her parents, her brother Ted (Kiddy) and her good pals Jan Polek, Jeanne Ratliff, Anne Dewey, and Phyllis Harrison.

A memorial service will be held In Edwall on Saturday, June 29th at 11:00 AM at the (Davenport) Edwall Methodist Church. A Luncheon will follow. In lieu of flowers and gifts, donations to Planned Parenthood, YWCA, ACLU, or any local animal shelter are suggested. In closing, please celebrate Marion's life with random parties, spontaneous outings, enjoy a great movie or book, and spread kindness to animals in need.

To plant trees in memory, please visit our Sympathy Store.
Published by Spokesman-Review from May 29 to Jun. 26, 2019.
MEMORIAL EVENTS
Jun
29
Memorial service
11:00a.m.
(Davenport) Edwall Methodist Church
, WA
MEMORIES & CONDOLENCES
12 Entries
Marion was a treasure. So enjoyed her enthusiasm and joy for life. Sorry we won't be able to make the memorial service. All our love.
Lindell Haggin
June 27, 2019
We are saddened to hear about your loss. May you find comfort in knowing that God collects our tears and is ready to sustain us during our time of need - Psalm 56:8.
F&D
June 27, 2019
Angela, Ginny & Jamie - I am so sorry about your mom - she was a force of nature and an inspiration to so many people.
I enjoyed talking with her at Auntie Parm's 50th wedding party, and again at Tyler's wedding. She accomplished so many things in her life, and you should be proud of her. Hugs to you all as you share great memories of your mom.
Terry Timm Moos
June 17, 2019
Dear Angela, Virginia, Family and Friends,
We Sisters of the Holy Names send you our prayerful sympathy as you give Marion back to her loving Creator. May your Mother's new life in God's Presence be a deep source of peace for you all, and may you know her nearness always.
Sisters of the Holy Names of Jesus and Mary
June 17, 2019
I'd like to extend my condolences to the family and friends for the loss of your loved one Marion Sutherland Moos, may the words at John 11:17-25 soothe your hearts and give you comfort.

ID/JW
June 7, 2019
Psalm 90:10 says that the days of our years are 70 years, And if because of special mightiness they are 80 years.
May the memories of the wonderful times you shared together bring a smile and joy in your heart.
June 7, 2019
I knew Marion for her warm smile when ever I met her at a meeting throughout the region.She was always current with all the events going on in the community and why we needed to be aware of the issue.
Marion carried the flame of justice. Thank you Marion. May you Rest in Peace.
Tom Carroll
May 30, 2019
All our love from Mom the kids and I.
Lisa Miezejeski
May 29, 2019
Marion was truly the best of the best. She encouraged and empowered me and so many women. My world just got dimmer without her shining light. I feel her loss deeply and wished I had reached out to her more often. I actually tried to call her on the day she passed away...so I choose to believe our connection was never lost. Love you so much, Marion! My sincerest wish for healing and strength to her family.
Leanne Blood
May 29, 2019
Her contributions made real change and she lived with gusto. Ir was a joy to bump into Marion at meetings, protest, concerts and events over the years. She would call me by name and cite a detail of an article I had written. Such a spirit!
Carla Johnson
May 29, 2019
My darling Marion - blessings to you on this next leg of your grand adventure. I miss your smile, your laugh and the twinkle in your eye. Thank you for all that you taught me! Thank you for the encouragement and the support you gave me for decades. Now I feebly try to pass that on to others - but I will never be able to do it will the style and grace that you showed. Your bright light lives on in the many women you mentored.

Dearest Ginny, I am so very sorry for the loss of your darling mother. Words fail me at a time like this. Words won't heal the hole in your heart. I wish that I could just hug the bejeepers out of you. It has been a long journey for you both. Blessings to you - love you.
Coralee Auverson Brewer
May 29, 2019
Dear Ginnie - I'm thinking about you today. I remember your mom from various activities you did together. She was a fabulous lady! Sending Light to you as you say goodbye to your amazing mom.
Deborah Rose Cano
May 29, 2019
Showing 1 - 12 of 12 results