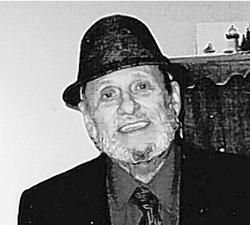 DEMPSEY, John S. "Jack" 73, of Springfield, went to be with his Lord February 2, 2012. He was born May 29, 1938 in Greensboro, North Carolina, the son of John William and Helen Louise (Higgins) Dempsey. Mr. Dempsey was a member of Emanuel Promise Church, the V. F. W. and he enjoyed fishing. He was a Veteran of the United States Army and was a retired Truck Driver. Survivors include his wife; Martha (McCarty) Dempsey, four children; Victor Pinzino, Oregon, Lisa (David) Patton, Florida, Gina (Paul) Hyde, Nebraska and Michelle Martindale, Springfield, five grandchildren, six great grandchildren, two brothers; Bill (Pam) Dempsey, Georgia and Conny (Jenny) Dempsey, New Jersey, half sister; Jean (Wayne) Wilson, South Carolina and numerous nieces and nephews. He was preceded in death by a brother; Ralph Dempsey and his parents. Funeral services will be held at 2:00PM Monday in the Emanuel Promise Church, 2420 East Home Road, with Mr. Dempsey's brother Bill Dempsey officiating. Visitation will be held for two hours prior to the services in the church. Burial will follow in Ferncliff Cemetery. Arrangements are being handled by the JONES-KENNEY-ZECHMAN FUNERAL HOME.

Published by Springfield News-Sun on Feb. 5, 2012.
To plant trees in memory, please visit the Sympathy Store.
MEMORIAL EVENTS
To offer your sympathy during this difficult time, you can now have memorial trees planted in a National Forest in memory of your loved one.
MAKE A DONATION
MEMORIES & CONDOLENCES
9 Entries
John “Jack” Dempsey, was a great mentor! He taught me a lot about the Security business! We worked together at the Clark County Public Library as Security Officer’s! Jack was on top of his game! That’s why the library is the House that Jack built
Jeff Smith
Friend
January 30, 2021
Marty and family, Our thoughts are with you and hope you will find comfort that we know he is in heaven.I know there will always be a void in your heart for him, but he will be watching over all of us in heaven !! Love your friends in Christ, Leon and Carol
Carol Darst
February 11, 2012
Marti, Michelle & family, I am soory for your loss but Jack is now well in Heaven. He always made me feel so comfortable and felt like I had known him almost all my life. Your friend, and neighbor, Janie
Janie Souders
February 8, 2012
Lisa and family,
I am deeply sorry for your loss. My thoughts are with you in this time of sorrow. May he now rest in peace without pain and suffering.
Love Always,
Heather Lloyd
February 7, 2012
Marty and Michelle, and the extended Dempsey Family. I am so sorry for your loss. Jack was an Awsome human being. We shared some crazy times at the Library. He was so proud of his family, and I know you all were proud of him. He always had the greatest stories to tell. I could sit and listen all day to him. He always talked about our Savior, and I know there is a special place for him, right next to the throne. You will forever be in my thoughts and prayers. Please keep in touch,
Love Jeff Smith
Jeff Smith
February 7, 2012
I knew Jack from working @ the library, he will be missed. My thoughts and prayers go out to his family. God Bless You, Leslie Craig
Leslie Craig
February 6, 2012
Michelle and family:
I am so sorry for your loss. My thoughts and prayers are with you. Love ya
Hilary Sisler
February 5, 2012
In loving memory of a wonderful person. We will love you and miss you always.
Carol Darst
February 5, 2012
Martha and family, I am sending you my deepest, heartfelt sympathy for the tremendous loss of your husband and father. He is now at rest; cherished and held gently in God's hands. My thoughts and prayers are with each of you.
Debbie (Flory) Simonton
February 5, 2012
Showing 1 - 9 of 9 results