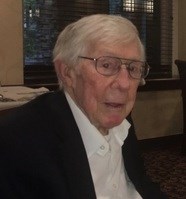 FUNERAL HOME
Leo P. Gallagher & Son Funeral Home
2900 Summer Street
Stamford, CT
George E. Cranston
George E. Cranston, 92, in Stamford, CT, November 15. George was born in Brooklyn, NY to Rufus F. and Elizabeth L. (Wheeler) Cranston. He attended La Salle Academy, Manhattan College, and Columbia University School of Engineering where he earned his degree in civil engineering. George served in the Navy during World War II and attained the rank of Lieutenant. He served in the Pacific Theater as a civil engineer. In 1950 he married Jeannette M. Farrell, also of Brooklyn, and they lived for over two decades in Baldwin (Town of Hempstead), NY with their five children. Since the early 70s he and Jeannette made their home in Stamford, CT. He worked as a foreman on the construction of the Brooklyn-Battery Tunnel in New York, as a chemical engineer for many years at Chemico in New York, and was later President of Peabody Process Systems in Connecticut. In his work he quietly changed the lives and improved the health of millions of people around the world as a pioneer in the industrial air pollution control business.
A devout lifelong Roman Catholic, George was an active and beloved member of the Emmaus Community in Stamford, CT for over forty years. He was known for his quiet and unassuming generosity, providing expert assistance with home repairs and other tasks for his friends, neighbors, and community members. He was an active volunteer for Adopt-a-House and Habitat for Humanity, helping restore abandoned buildings to create permanent homes for low-income families. He lived his last four years of life at Edgehill in Stamford, where he was a warm and caring presence in many residents' lives.
George enjoyed an active life, filled with travel, racquetball, and especially golf. He was a longtime member of the Country Club of Darien. George was a man of integrity, respected colleague and employer, a great friend, devoted husband, gentlemanly companion, and terrific father.
George was preceded in death by his wife, Jeannette. He is survived by his children, Jane of New York, NY, Peter of Dunwoody, GA, Judy of Rochester, NY, Kevin of Boston, MA, and Meg of Los Angeles, CA, grandchildren Peter, Catherine, and Amber Cranston, and Spenser Kuipers, and his many friends and community members. A Catholic Funeral Mass will be celebrated at the Church of St. Cecilia in Stamford, November 18 at 11 a.m. Visiting hours will be held November 17 from 3-5 p.m. and 7-9 p.m. at Leo P. Gallagher & Son Funeral Home, 2900 Summer Street, Stamford, CT 203-327-1313. In lieu of flowers, the family requests donations in George's honor to the Emmaus Community.

Published by Stamford Advocate on Nov. 17, 2017.
To plant trees in memory, please visit the Sympathy Store.
MEMORIAL EVENTS
To offer your sympathy during this difficult time, you can now have memorial trees planted in a National Forest in memory of your loved one.
Funeral services provided by:
Leo P. Gallagher & Son Funeral Home
MAKE A DONATION
MEMORIES & CONDOLENCES
9 Entries
I believe the father of Meg's must have been a very fine guy
John Baldessari
November 22, 2017
George Cranston had a profoundly positive impact on the life of our family as his daughter Meg and I put together our household and raised our son, Spenser. Spenser took great pleasure in George's legacy as a Seabee, as a graduate of Columbia, as a designer of bridges and tunnels, and as an environmental engineer. He would often say: "What would Grandpa George do?" George loved his community in Stamford and at Emmaus Church. This is a legacy that will endure. What a man! We will all miss him.
Dean Kuipers
November 22, 2017
As a former member Emmaus, we remember George well. Our sincerest condolences to all of you...Vincent and Patty Notorio
November 20, 2017
To George and his family:
We walk the human journey during life, searching for and walking the spiritual path, then we transition to living with God full-time and the spiritual path is ours forever.
Caitlyn Mayfair
November 18, 2017
To the family of George Cranson. I am deeply sorry for your loss . May Almighty God grant you sustenance during this sad time. Please see Psalms 68 verse 19. as your source of comfort.
Patricia, CNA employee
November 17, 2017
The Manhattan College alumni community shares the grief, and is now praying for our fellow alumni and the family at this time. The Alumni Office has been informed. As well as the Jasper Jottings community that I personally can reach. We are all a little poorer now. "No man is an island, entire of itself ... any mans death diminishes me". We are sorry for your loss.
fjohn reinke (mc1968)
November 17, 2017
Celebrating a life well lived. We will cherish the memories forever.
November 17, 2017
My sympathies to the Cranston Family. Please know that God is our refuge and strength. Psalms 46 chapter.
November 17, 2017
Every day we are losing the members of our " Greatest Generation." May we always remember what they have done for mankind and our country. Thank you for your service to our nation.
A grateful American
November 17, 2017
Showing 1 - 9 of 9 results