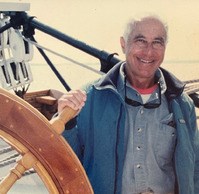 FUNERAL HOME
Collins Funeral Home
92 East Ave.
Norwalk, CT
Jack Alexander
Jack Alexander, an investment consultant, died on May 28, 2021, in Stamford, CT. He was 92 years old. He was the managing partner of Alexander Associates until 1997 when he retired.
Mr. Alexander was the son of Elsie Robinson Alexander and Julius Alexander. He grew up in Woodmere, NY, but lived most of his life in Stamford, CT. His wife of 50 years, Charlotte Temerson Alexander predeceased him. Surviving him are his three sons, Moses, Julius, and Robert Alexander, their spouses, nine grandchildren, his sister Bette Alexander, and ladyfriend Shelia Schleir.
Jack Alexander was an avid sailor, cruising and racing with his family. He was a member of Halloween Yacht Club and three-time winner of the Stamford Mayor's Cup Race. He was HYC Yachtsman of the Year and received the HYC Sportsmanship award.
He raced the family boats, with the Breakwater Irregulars and received their Sportsmanship award. He was member of the Stamford Sail and Power Squadron and instructor in Advanced Piloting. Before moving to Stamford, he was commander of U.S. Coast Guard Auxiliary in Atlantic Beach, NY and held a captains license from the U.S. Coast Guard.
Mr. Alexander was a former president of the Stamford Camera Club and an exhibitor in the Saloon Class. He was a member of the Stamford Amateur Radio Association and held the extra class license: K1UL. He was a member of the Connecticut Personal Computer User's Group and belonged to the Sound Cyclists Bicycle Club.
He graduated from Woodmere Academy in 1946 and from Lafayette College Class of 1950 and received a Master of Science in Business Administration from Columbia University in 1951. He was elected to Phi Beta Kappa in 1949.
Mr. Alexander was a member of Temple Sinai in Stamford and president of the Temple from 1972 to 1974 and president of the Brotherhood Men's Club from 1966 to 1967. He was a member of Temple Shalom in Norwalk.
Funeral service will be private at Beth David Cemetery in Elmont, NY. Donations may be directed to a charity of your choice. Please visit www.collinsfh,com/obituaries to leave condolences.
Published by The Hour & Stamford Advocate on May 29, 2021.
To plant trees in memory, please visit the Sympathy Store.
MEMORIAL EVENTS
To offer your sympathy during this difficult time, you can now have memorial trees planted in a National Forest in memory of your loved one.
Funeral services provided by:
Collins Funeral Home
MAKE A DONATION
Please consider a donation as requested by the family.
MEMORIES & CONDOLENCES
Sponsored by Collins Funeral Home.
5 Entries
Jack will be missed. Always a friendly kind and considerate gentleman.
Samantha Heilweil
Friend
July 31, 2021
Sending my condolences to Moses and the rest of the Alexander family. Very sorry to hear of Jack's passing and thankful to hear he lived a long, pleasant life. I feel honored to be among those to inherit a multi-generational, happy friendship between the Alexanders and the Manns: from Jack and Milton before us.
Isaiah Mann
Friend
June 8, 2021
Sending sincere condolences to the Alexander family. I knew Jack from the Halloween Yacht Club. My husband and I admired him whenever he took his boat out for a sail by himself. Jack was always so kind, and it was a pleasure speaking with him.
May all the good memories bring you comfort and peace.
Audrey Iscaro
Audrey ISCARO
Friend
June 2, 2021
Rob and family, please know that you are in our thoughts and prayers.

Scott and Maureen Humphrey
Scott Humphrey
Coworker
May 29, 2021
The Simmons family extends their condolences to the Alexander family. Our lives intertwined quite during the 70's. We knew the Alexanders from Troop 1 BSA and the Newfield Swim Club. Julius was in sevreral of my classes at Rippowam HS. My father loved schmoozing with Mr. Alexander at the swim club, and talking up the Boy Scouts. May these good memories comfort you in this time of sadness.
Steven Simmons
Friend
May 29, 2021
Showing 1 - 5 of 5 results