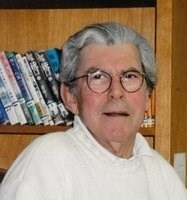 BORN
1934
DIED
2020
FUNERAL HOME
Nicholas F. Cognetta Funeral Home & Crematory
104 Myrtle Avenue
Stamford, CT
Michael S. Saffery
Michael "Mick" Sydney Saffery, 86, of Stamford passed away peacefully on Sunday, December 20, 2020 in hospice care at The Stamford Hospital. He was born on February 18, 1934 in Margate, Kent, England to the late Jack and Daisy Tog Saffery.
Mick joined the Royal Air Force at 17 and spent the next 22 years serving in the UK, Kenya, the Maldive Islands, Malta. Singapore, Italy and Christmas Island in the South Pacific as a telecommunications specialist. He was on Christmas Island in 1958, serving for ten months immediately after the British Ministry of Defense made six open-air detonations of hydrogen bombs. He said he didn't think anything about radiation at the time, but spent his off duty hours playing soccer on a field made of crushed coral, bathing in sea water and eating the sea bass he and his friends would catch.
Mick met his wife Dee, in 1970 when serving at Commander Maritime Air Forces Mediterranean in Naples, Italy while she was stationed with the US Navy at NATO's Headquarters Allied Forces Southern Europe also in Naples. They married and moved to England where he served until his retirement in 1974 when they moved to the United States. Here he worked for the British Mission to the United Nations in New York City and for many years with Louis Dreyfus Corporation in Wilton.
Nineteen years after the nuclear testing on Christmas Island, Mick began to lose vision in both eyes, which was attributed to the radiation he received. Surgery restored his vision and in 1981 he applied for radiation-related compensation from the British Government. This claim was rejected, so in 1983, he lodged an appeal with the Pensions Appeals Tribunal, a court which has medical experts to help make judgments. He was the first British veteran to receive a military pension for "attributable to service" radiation-related injuries, at the time one of only six such pensions awarded to the more than 17,000 claimants.
Mick is survived by his loving wife of 50 years on December 19, Deidra "Dee" Saffery, of Stamford and his daughter Jennifer Bartley and her husband Adam of South Salem, NY and his sister-in-law Maureen as well as several nieces, nephews and cousins living in England
Besides his parents, Mick is predeceased by his brother John and his beloved dog Max, just 8 months ago.
Due to the current health situation, there will be no calling hours and services will be private. The Nicholas F. Cognetta Funeral Home & Crematory is honored to assist the family with the arrangements.
Memorial contributions may be made in Mick's name to the Connecticut Humane Society, 455 Post Road East, Westport, CT 06880.
To leave online condolences, please visit www.cognetta.com or our Facebook page www.facebook.com\NicholasFCognettaFuneralHomeCrematory.

Published by Stamford Advocate on Dec. 21, 2020.
To plant trees in memory, please visit the Sympathy Store.
MEMORIAL EVENTS
To offer your sympathy during this difficult time, you can now have memorial trees planted in a National Forest in memory of your loved one.
Funeral services provided by:
Nicholas F. Cognetta Funeral Home & Crematory
MAKE A DONATION
MEMORIES & CONDOLENCES
Sponsored by Nicholas F. Cognetta Funeral Home & Crematory.
0 Entries
Be the first to post a memory or condolences.