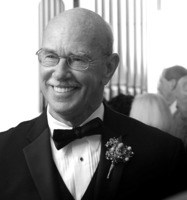 William Bradford
Hubbell, Jr.
William ("Bill") Bradford Hubbell, Jr. died of the effects of Parkinson's Disease on September 12, 2020. His wisdom and graciousness, great love of family, and deep awareness of and interest in the world around him inspired his love of photography and created heartfelt connections with family and friends.
Bill was born to William Bradford Hubbell and Dorothy Twyeffort Hubbell in New York City on August 21, 1934 and grew up in Bedford, New York. He attended Bedford's One Room Schoolhouse, The Rippowam School, Deerfield Academy, and Princeton University. He also enrolled in courses at Columbia University and Yale University. Following college, he served his country in the Air Force during the Korean War.
He found his passion and profession in photography. He remembered being interested in photography at the age of twelve. By the time he was a college student, he had discovered that he could make a living at his hobby.
After apprenticeships with photographers at world-renowned Magnum Photos, he began full-time work as an independent, shooting primarily for corporate and advertising accounts. Soon afterward, he began traveling abroad and took photographs for such magazines as National Geographic, Time, and Life. He went on to serve a three-year stint as a writer and photographer for the U.S. Information Agency in Japan, Korea, and southeast Asia.
Returning home, Bill headed the photography department at Guidance Associates, the educational audio-visual division of Harcourt Brace Jovanovich. He worked both behind the camera and as an executive at Harcourt Brace where he produced educational videos for schools and a movie called "Echoes." He then went out on his own, exploring all facets of photography from food to portraits and architecture to landscapes. He produced several books: Connecticut, New England Coast, Safe Harbor, Seasons of Maine, Portland and Good Fences; and collaborated on each of the Stamford (CT) and Greenwich (CT) books celebrating their respective 350th anniversaries.
He was a builder of stone walls; a world traveler; a farmer; a maker of fudge, Christmas punch, or a sandwich of tomatoes just picked off the vine; a floor refinisher; copper polisher; handyman; grower of prize-winning dahlias; film-maker; a devoted groomer to his beloved dogs Kodak, Domino, and Oscar; and a lover of all things chocolate. He was fascinated by history and nature. He recorded the life he saw around him, from his children growing up to the changes in the seasons. He enjoyed revitalizing old houses and antiques, bringing them back to usefulness and beauty. He was a consummate gentleman.
Because he chose a nontraditional occupation, he encouraged his children and step-children to choose their own paths and supported them in following their dreams. Parkinson's, to paraphrase the Paul Simon song, "took his Kodachrome away," but he kept his positive outlook, sense of humor, and appreciation for the people and things he enjoyed in his life. Bill is survived by his wife of 29 years, Jean Hubbell, of Falmouth, ME; his daughter Drika Costantino and her husband Anthony of Cos Cob, CT; his son Brad Hubbell and his wife Suzanne Daily, and their three children, Zack Hubbell, Alex Hubbell, and Corinne Daily of Mill Valley, CA; his step-son Tim Lackey and his wife Heidi of Whitefield, ME; his step-daughter Amanda Murray, her husband Rob, and their four children, Eliza and Hannah Cote and Daniel and Jonah Murray, of Yarmouth, ME; and by his sister, Anne Hubbell French of Norwich, VT and his sister-in-law, Elizabeth ("Libby") Hubbell of Asheville, NC. He was predeceased by his brother John Twyeffort Hubbell and his step-son William Davis ("Dave") Lackey, Jr. He also maintained a friendship with his first wife, Marian Bingham, of Old Lyme, CT. He will be dearly missed by his family and friends, but his spirit and clear eye remain not only in all the pictures he took, but also in the hearts of those who love him.
Please visit www.lindquistfuneralhome.com to sign Bill's online guestbook.
Published by Stamford Advocate & Greenwich Time on Sep. 17, 2020.
To plant trees in memory, please visit the Sympathy Store.
MEMORIAL EVENTS
To offer your sympathy during this difficult time, you can now have memorial trees planted in a National Forest in memory of your loved one.
MAKE A DONATION
MEMORIES & CONDOLENCES
1 Entry
We have known Bill for 55 years! Recently we lived too far apart for regular contact but we kept in touch. Bill was a wonderful friend and a super guy. We send our deepest condolences to Jeanie and to all the family.
Ron and Daniele Flack.
Paris, France
Ronald and DanieleFlack
Friend
September 20, 2020
Showing 1 - 1 of 1 results