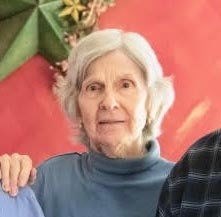 Born in McAdoo, she was the daughter of the late George and Anna (Holic) Benko.

She was a member of Faith United Church of Christ, Hazle Twp.

Prior to retiring, Elizabeth was a dietary aide at Hazleton General Hospital.

Preceding her in death, in addition to her parents, were brothers, Bernard, Clarence, John and George Benko; and sister, Margaret Benko.

Surviving are her sister, Anna Cardamone, Drums; and many nieces and nephews.

Her funeral service will be held at noon Monday at Damiano Funeral Home Inc., McAdoo. The Rev. Jane Hess will officiate the service.

Calling hours will be from 10 a.m. to noon Monday at the funeral home.

In lieu of flowers, memorial donations may be made to the Alzheimer's Association at www.alz.org.

Condolences may be entered and information is available at www.damianof

Published by Standard-Speaker from Nov. 26 to Nov. 27, 2021.
To plant trees in memory, please visit the Sympathy Store.
MEMORIAL EVENTS
To offer your sympathy during this difficult time, you can now have memorial trees planted in a National Forest in memory of your loved one.
Funeral services provided by:
Damiano Funeral Home
MAKE A DONATION
Please consider a donation as requested by the family.
MEMORIES & CONDOLENCES
Sponsored by Damiano Funeral Home.
1 Entry
It was a sad to read about Betty. We were next door neighbors on Washington St in the '50s.
Paul J Besitka
November 27, 2021
Showing 1 - 1 of 1 results