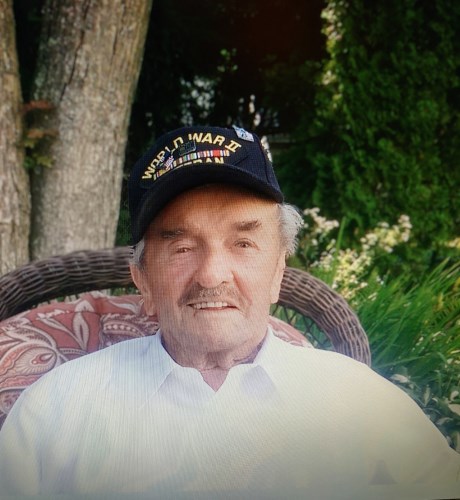 Frederick J. Gula (Henry Good), 98, of Hazleton passed away Monday morning, a loss to our family of a quiet, gentle caring man.

He was born in Hazleton son of the late George and Sophia (Surawiec) Good. He was a member of the Parish of Ss. Cyril and Methodius at the Church of St. Joseph. He was a 1939 graduate of Hazleton High School.

A proud veteran of World War II, he landed in Normandy, France, shortly after D-Day and served under Gen. George Patton with the Third Army during the war. His decorations and citations include the Good Conduct Medal, American Campaign Medal, European, African and Middle East Medal with three bronze stars and the World War II Victory Medal.

Prior to retiring, he was a mechanic by trade and last employed by Frame Oil Company. Fred was an avid Phillies and Chicago Cubs baseball fan. Our own "Mr. Fix-it" was always ready to lend a hand repairing, building or assisting with any type of home or mechanical project.

Preceding him in death was his wife, to whom he was married to for 62 years before her death in 2008, the former Mary Kopashy; his son, James Paul Gula; and nine siblings, John, Stanley, Joseph, Edward, Sister Mary Jeanette, Stella, Sophia, Mildred and Anna. He was the last surviving member of his immediate family.

Friends and relatives are invited to attend the Mass of Christian Burial at 10 a.m. Friday at the Parish of Ss. Cyril and Methodius at the Church of St. Joseph, Hazleton.

Due to COVID-19 restrictions, a viewing will be held at the convenience of the family.

Arrangements are under the direction of Frank J. Bonin Funeral Home Inc., Hazleton.

In lieu of flowers, please consider a donation to a charity of one's choice in Frederick's memory.