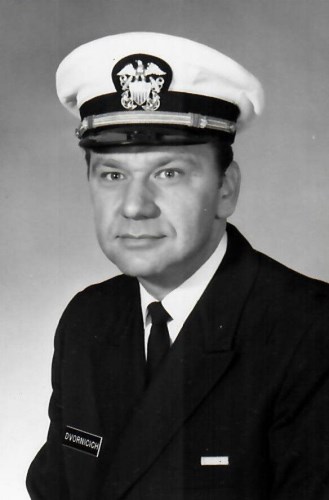 Joseph Dvornicich, 89, dropped anchor and ended his earthly journey at his home with his wife by his side Nov. 25, Thanksgiving morning.

He was born and raised in Philadelphia, Kensington. He attended St. Anne Grade School, Northeast Catholic High School and graduated from LaSalle University.

Joseph had a passion for public service. He joined the U.S. Navy as a seaman recruit in 1949 at the age of 17 and served on active duty for two years. He rose to the rank of quartermaster second class. In 1955 he was commissioned as a U.S. Navy officer, ensign. During his 24 years of service, he qualified as a scuba, hard hat diver and underwater explosive demolition technician. Additionally, he was a navigator on the minesweepers and destroyer escort USS Powell. Joseph was honorably discharged in 1973 as a lieutenant commander.

His public service did not cease upon retirement from the Navy. Joseph retired from U.S. Postal Service after 19 years; he also worked part time for the Fort Worth Police Department for five years and worked seven seasons as a park ranger at Beltzville.

Joseph was known for his was vast knowledge of military history and extensive book collections. He was avid hunter and fisherman, which he shared with his grandsons. Joseph also volunteered many hours to his church, Good Shepherd, Drums, St. John's Hospice and developing computer programs for seniors.

Preceding Joseph in death, in addition to his parents, Joseph and Mary (Skrabonja) Dvornicich, were his sister, Margaret and her husband, Harry Champ, Bristol, England.

He is survived by his wife of 55 years, Josemarie (Butchko) Dvornicich; daughters, Dawn Kearney; and Joy Dvornicich and her husband, Ralph Rostock; son-in-law, John Kearney; sister, Marie Cunningham and her husband, Thomas J.; grandchildren, Joseph and Liam Kearney and Julie and Nicholas Rostock; and many nieces and nephews.

A memorial service will be held at 12:30 p.m. Friday at Good Shepherd Church, Drums. The Rev. Michael Kloton will preside.

Friends and family may call at the church for a viewing period from 11:30 p.m. until the time of service.

Internment of Joseph's earthly remains will be at the convenience of the family in Washington Crossing National Cemetery, Newtown.

Krapf & Hughes Funeral Home and Crematory, Drums, is assisting the family with arrangements.

Condolence messages may be entered in the family's memorial guestbook on the funeral home website at www.khfuneralhomes.com.

Published by Standard-Speaker from Nov. 26 to Dec. 7, 2021.
To plant trees in memory, please visit the Sympathy Store.
MEMORIAL EVENTS
To offer your sympathy during this difficult time, you can now have memorial trees planted in a National Forest in memory of your loved one.
Funeral services provided by:
Krapf & Hughes Funeral Home - Butler Chapel
MAKE A DONATION
MEMORIES & CONDOLENCES
Sponsored by Krapf & Hughes Funeral Home - Butler Chapel.
0 Entries
Be the first to post a memory or condolences.