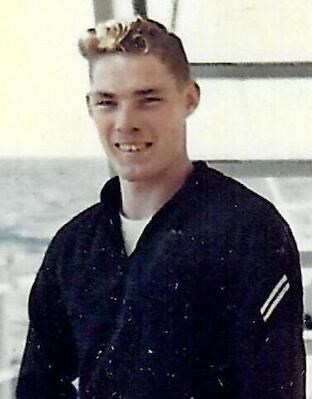 Wellsburg - Francis Erwin Woodard, 78, AKA, Sonny, Grandpa Grr, Bush, the man downstairs, passed away peacefully in his home surrounded by his loving family on June 10th, 2021.

He was born April 23, 1943 in Elmira, NY. He was predeceased in death by his Grandparents, Abby and Peter Dickson.

Francis was a veteran of the United States Navy. He proudly served on the USS Springfield from July 1963 - July 1965. He remained in the Reserves until January 1968. He retired from the Sheet Metal Union Local #112.

Francis loved the outdoors and all animals and wildlife. He was an avid hunter and fisherman. He spent countless hours on his tractor mowing and taking care of his land.

He had a lifelong love for baseball. He played from a very young age. His positions were center field and short stop. He was picked to play for the Washington Senators. He passed that love on as he coached his son's baseball teams as he grew up. He was a devoted Yankees fan.

He also loved horse racing. He enjoyed watching at Tioga Downs, Finger Lakes Race Track or on TV. He was also known to stop by OTB on occasion to place a bet or two. He liked following all the stats of the Jockeys, horses and their owners.

In lieu of flowers, please make a memorial donation to Care First (Hospice). A special Thank You to the Care First staff for their help and support.

Burial service at the convenience of the family in Woodlawn National Cemetery, Elmira. Arrangements have been entrusted to the Kalec Funeral Home.

To plant trees in memory, please visit our Sympathy Store.
Published by Star-Gazette from Jun. 12 to Jun. 15, 2021.
MEMORIAL EVENTS
No memorial events are currently scheduled.
To offer your sympathy during this difficult time, you can now have memorial trees planted in a National Forest in memory of your loved one.
Funeral services provided by:
Kalec Funeral Home
MEMORIES & CONDOLENCES
Sponsored by The Star-Gazette.
5 Entries
Rose so sorry for your loss it was my honor and pleasure to having been his nurse in the doctors office to Fran up until my retirement 6/5/20 ! May all the good memories of your life together give you the strength in this difficult time . RIP Fran Barb Walton
BARBARA WALTON
Friend
June 15, 2021
I'm so sorry to hear this what a great man he was, God bless Rose, Tom and the rest of the family. Prayers to you all.
Kay Ackerman
Friend
June 14, 2021
Thank you for your service.
Penny Walls
Acquaintance
June 13, 2021
Rose,
I am so sorry to hear of Sonny’s passing. Please know that you, Tom and Melissa are in my thoughts and prayers.