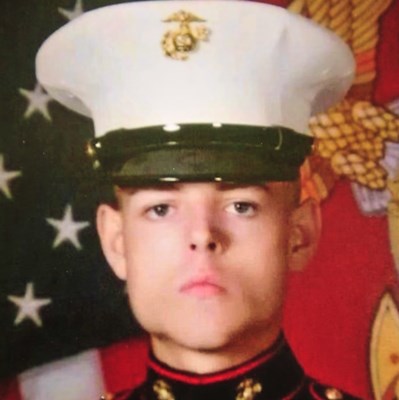 Jeffrey's last flight was with 11 of his fellow Marine Brothers aboard the two CH-53E Super Stallion Helicopters that collided in Hawaii on January 14, 2016. He was the Crew Chief of the Pegasus 31 in the HMH-463 Squadron Unit. He was a Weapons and Tactics Instructor for his Squadron.

Jeffrey was well loved and respected by his fellow Marines. Many of his fellow Marines talked of how he would spend much of his personal time helping them to learn. His superiors described him as being a very quick learner, and eager to advance.

Jeffrey was also very loved by his family. His smile will be missed as will his wonderful sense of humor. His loss will be difficult, but God needs him in Heaven now. We look forward to seeing you again, you will forever be our sunshine, watching over each and every one of us.

In lieu of flowers, please make donations to the Fisher House Foundation.


Published by Star-Gazette from Apr. 29 to May 1, 2016.
To plant trees in memory, please visit the Sympathy Store.
MEMORIAL EVENTS
Apr
23
Visitation
12:00p.m. - 4:00p.m.
Forest Hills Funeral Home
6995 Highway 101 PO BOX 605, Woodruff, SC
Apr
23
Funeral service
4:00p.m.
Forest Hills Funeral Home
6995 Highway 101 PO BOX 605, Woodruff, SC
Funeral services provided by:
Forest Hills Funeral Home
MAKE A DONATION
MEMORIES & CONDOLENCES
Sponsored by His Loving Mother.
21 Entries
Jeffrey and the others are not forgotten. Prayers daily for his family and friends.
Pearl Scheve
April 15, 2020
Thank You for the ultimate sacrifice.
Gone But Not Forgotten
Sandee Garza Schock
May 30, 2016
I will always remember you little brother, I still see you checking in and your first deployment and the things I trained you on. I love you and miss you. Semper fidelis fellow Pegasus brother. Till we meet again in Valhalla.
Alejandro Membreno
May 21, 2016
Thank you so much for your service and ultimate sacrifice. It takes a special person to serve your country and you were. RIP SGT. Jeffrey Allan Sempler. From a veteran myself to you. May God bless your family, friends and fellow Marines thru your loss. May God grant everyone with peace and special memories of you.
Valerie Clayborn
May 21, 2016 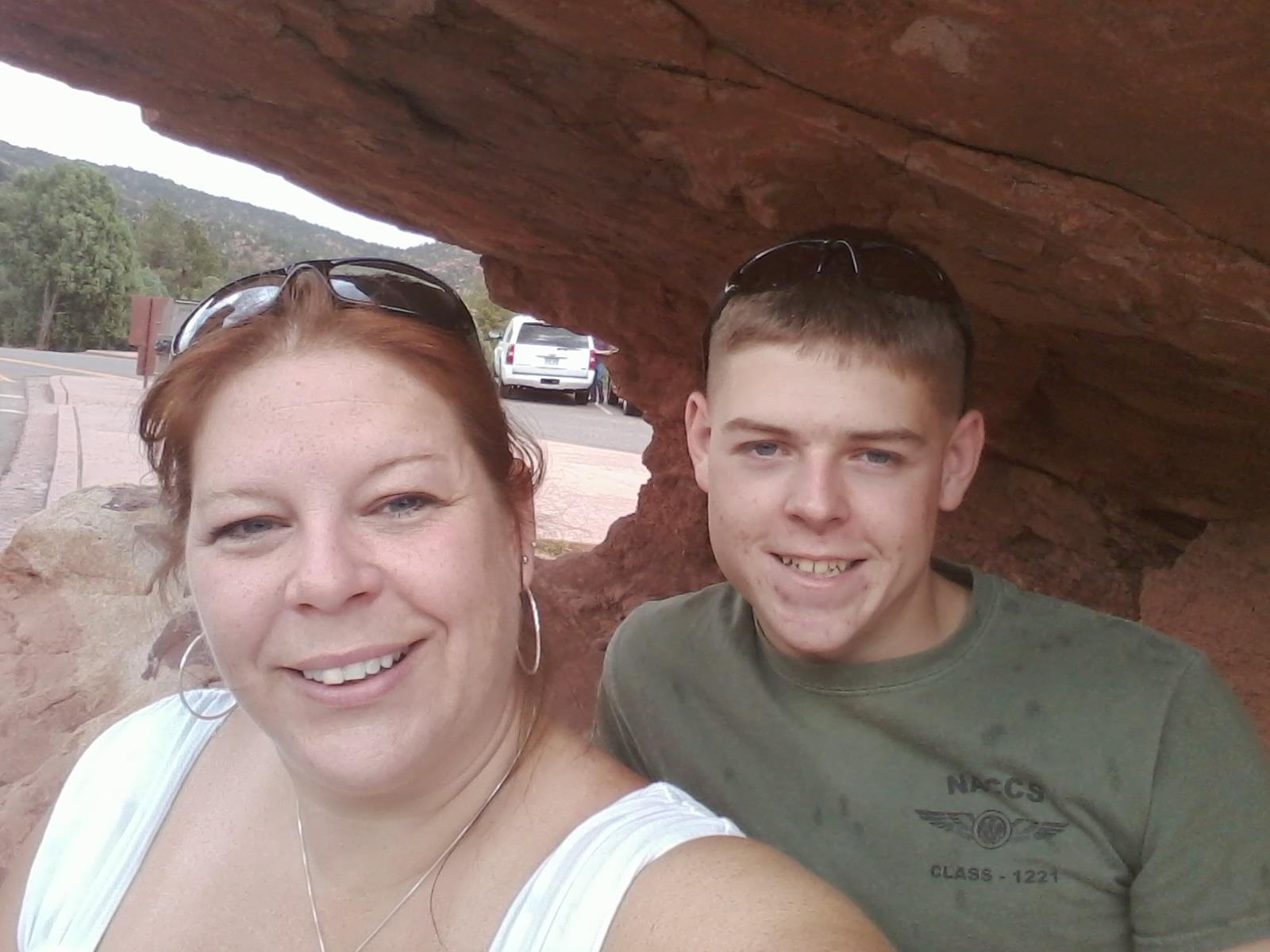 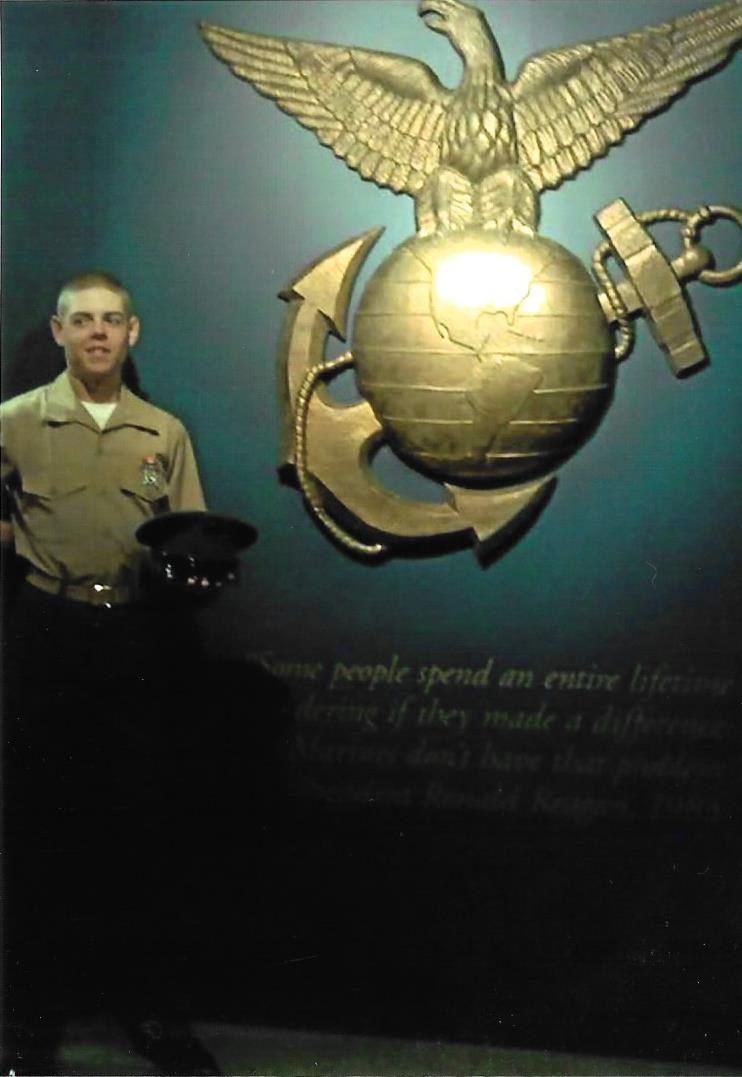 I only knew Jeffrey a short time and only spent time with him when he was in Colorado visiting his mom. We played golf together. We shared the same skill level (terrible) but we had fun. When he hit that ball square it would really go!
We shared a passion, Mustangs. I was going to ask him to put sequential turn signals in his Mom's Mustang. He had put them in his Mustang when he drove it here on his way to Hawaii. I never thought his car would come back without him.
His Marines said he was good at figuring things out. He could break down a M2 .50 cal Machine Gun and reassemble it like it was nothing. He trained his Marines to do the same.
Though we served in different branches during different eras I would have loved to have served with him. From what I have been told, Sgt Sempler was the kind of guy every NCO wishes to have in his squad, the go to guy who gets things done. If Jeffrey did not know how to get something done he would find a book or technical manual and learn how to do it.
Jeffrey is one of the 7% of the American population that serve in the military. It takes a special breed of that percentage to be a Marine
Laurie, Jeremy, and Gary have lost a great son. The Marine Corps has lost a great NCO, and the Country has lost a great young man who had tons of potential to do great things.


God has gained a new Marine to guard the streets of his Kingdom. When God gives Jeffrey liberty, I am sure he will be enjoying his passion so when you hear the thunder think of Jeffrey doing a burnout in the sky.


The Marines will say to Jeffrey Semper Fi. I say, Huah Sgt, this we will defend! 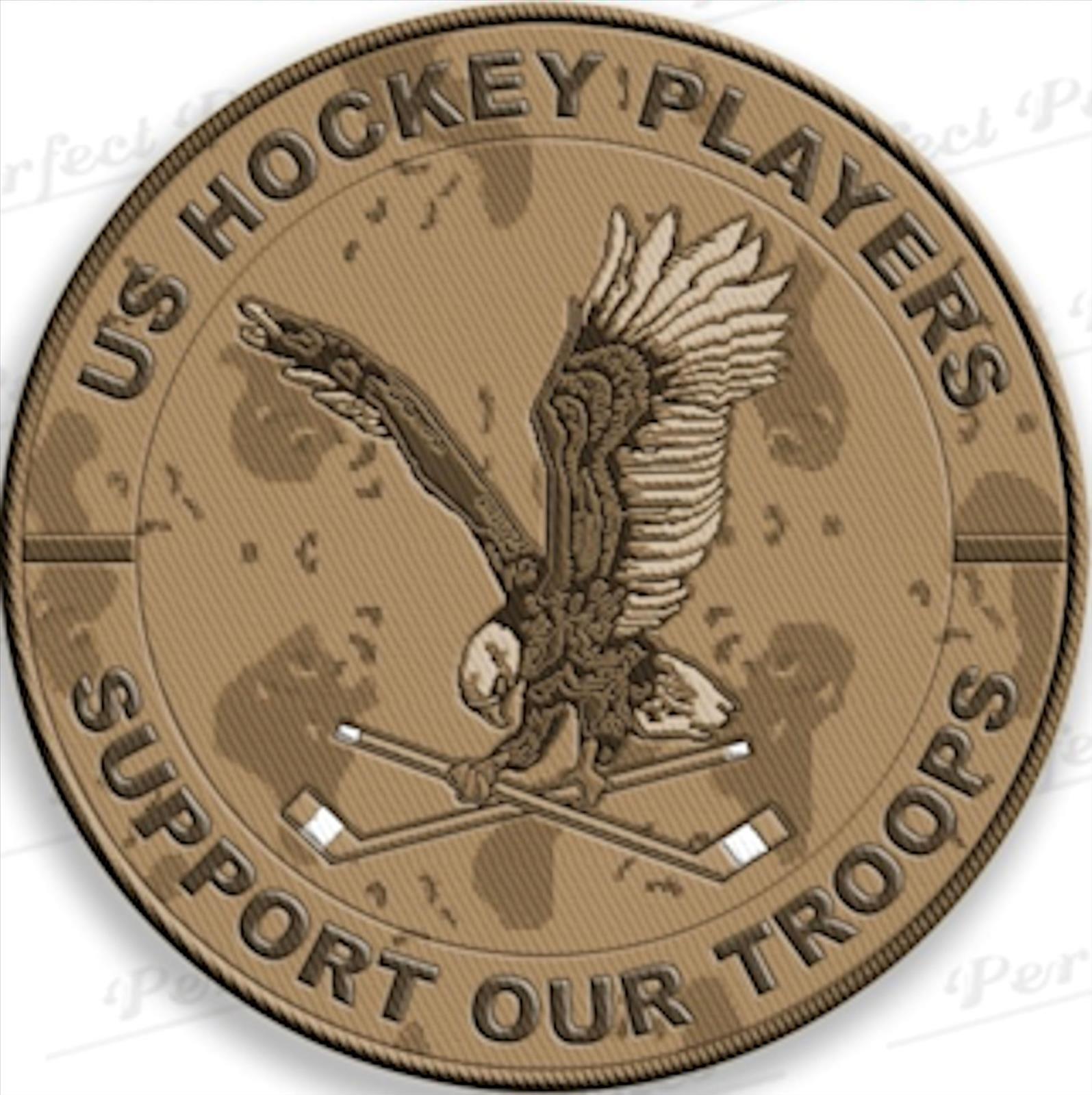 Hello,
We would like to express our deepest condolences and to also let the Sempler Family know that we recently sent Care Packages to American troops in Afghanistan. Each box carried a dedication sheet that includes the name, service information and a photo of your loved one, Jeffrey Allan Sempler US Marine Sergeant. We recognize that this is a humble tribute, but we wanted you to know that it is heartfelt and made possible by thousands of like-minded individuals in the youth hockey community and beyond. We will not forget. May God Bless you and keep you strong.
Sincerely,
Charlie Gili & Family
On Behalf of the US Hockey Players Support Our Troops Campaign
Charlie Gili
April 28, 2016
Rest in Peace Sgt. Sempler. You will always be remembered and deeply missed as my nephew and fellow Marine brother. Semper Fidelis.
Ken DeHaas
April 25, 2016
Rest In Peace Marine, hearts and prayers for your family and friends.
Veterans of Foreign Wars Post 11411
April 23, 2016
Thank you for your service and achievements 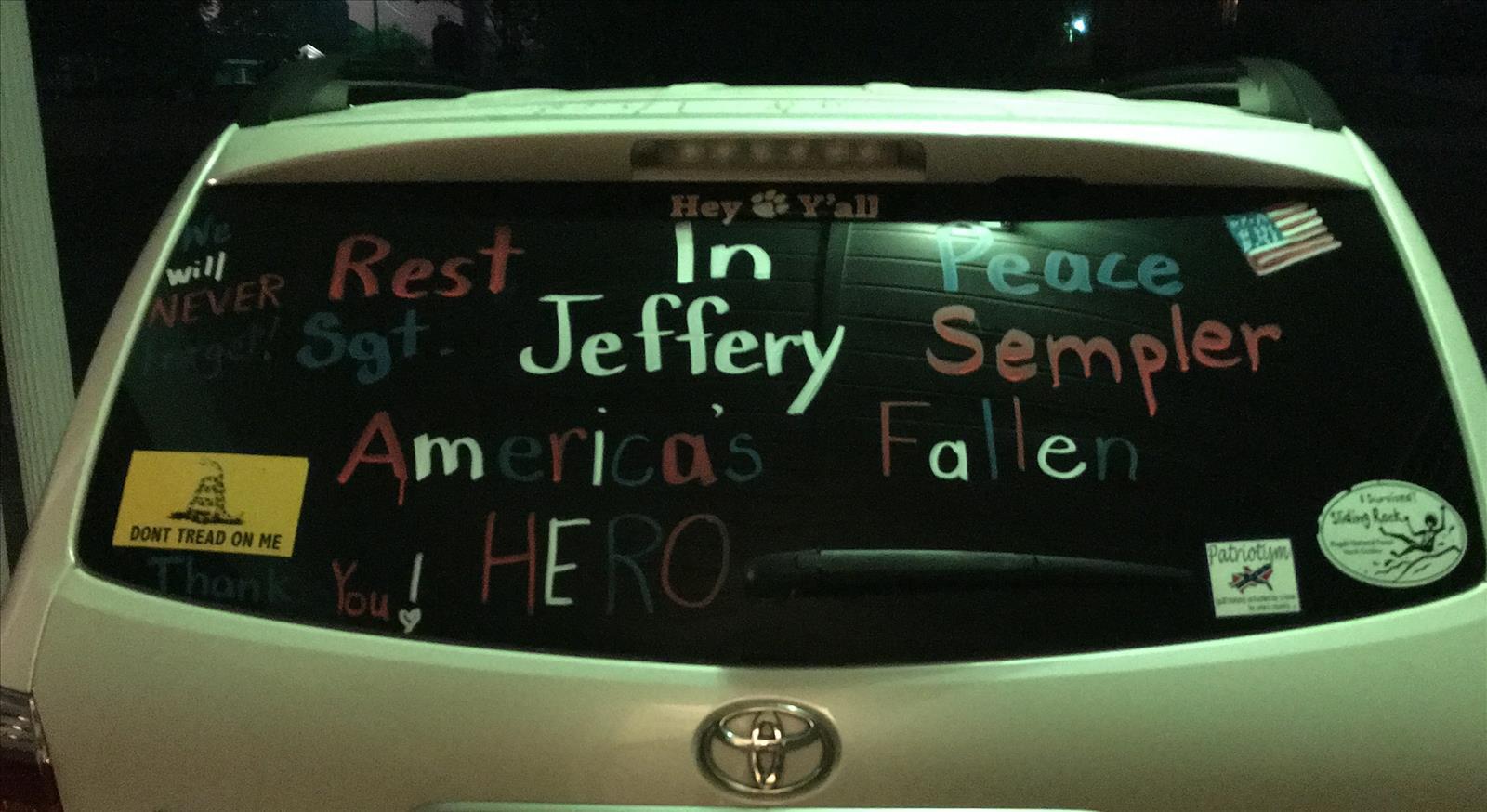 I can't even begin to put myself in your shoes but my heart breaks for the 12 families and our Nation...for in this crash we lost 12 AMERICAN HEROES.
Your son did not die in vain and he will never be forgotten.
I pray for Jesus to hold you so close.

If I can get information, my girls and I will show our respects roadside tomorrow before the funeral as I was unable to make it last night. But his name is painted all over my car so Imwill pay my respects regardless!

Rest easy Hero.
Jennifer Snow
April 23, 2016
Prayers for you and your family this day and each day ahead. We are grateful for his service.
Pearl Scheve
April 22, 2016
Please accept the condolences of the Blue Star Mothers of Spartanburg on the tragic death of your Marine. We are sending up prayers for your family and we thank you for unselfishly sharing Jeffrey with us and for his service to our country.
Marilyn Miller
April 22, 2016
Thank you for your service.My prayers are with you and the family and friends and fellow Marines all of whom will miss you greatly. Sibyl Bradley
Sibyl Bradley
April 21, 2016
Thank you for your service to our country and the United States Marine Corps.

Respectfully+,
Tom Marchant
379 Golden Bear Drive
Unit J-2
Pawleys Island, SC 29585
Tom Marchant
April 21, 2016
Our deepest sympathy to Jeffrey's family and friends. May sweet and happy memories bring you peace and comfort.
Roy and Susan Cooke
Capt. Rainer Cooke
Susan Cooke
April 21, 2016
Thank you Jeffrey for the ultimate sacrifice you gave for your country. RIP
April 21, 2016
Thank you for your service and ultimate sacrifice for our Country. May God bless and comfort your family, friends and fellow Marines with peace and wonderful memories for a life well-lived.
Paula Holmes
April 21, 2016
To the family I just want to say I am praying for you at this difficult time. I had the opportunity to meet Jeffrey years ago on the trip to Summerville when he was a part of the City of Spartanburg's police "explorers" program. He and my daughter Peaches became really close friends and I got to know him very well that week. Sgt. Munoz, Kristi, Dave Jeffrey and myself became family that week:) and I must say he was the life of the trip and kept the group laughing and made it that much more enjoyable. May God bless you, the family of this wonderful young man.
Tammy Thomas-Darity
April 20, 2016
Cindy McQueen
April 20, 2016
Showing 1 - 21 of 21 results