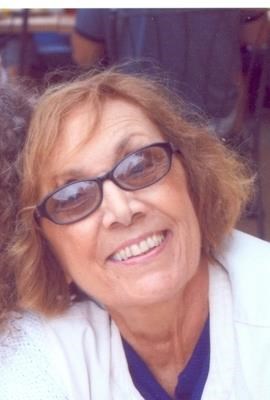 Age 75, passed away on Sunday, August 6, 2017, with her daughters by her side. Marian was born on April 1, 1942 to Samuel and Mary (Ricotta) Colera of Falconer, NY. She graduated from Falconer High School in 1960. She is survived by her two daughters - Jennifer Ambrose, (husband Shanti Little) of Grants Pass, OR, and Jessica Lawrence (husband Ben Lawrence) of State College, PA; husband Philip Grushetsky of Elmira; granddaughters, Madeline, Jacqueline, and Amelia Lawrence, and Deva Bluemoon, sister Sylvia Schrader of Falconer, NY; step-children, Steve Grushetsky (wife April, son Steve, daughter Annie), Dorothy Grushetsky, and Flip Grushetsky; many nieces, nephews, and dear friends. Marian married Clay Ambrose in 1963. Later they moved to Elmira, NY where they started and raised their family. Marian established herself in Elmira through her years of community service and her strong work ethic at a number of local businesses. Marian was locally known for her culinary gifts. She was one of the original " Foodies" decades before the Food Network even existed. She loved to entertain, catering her own parties and events, and inspiring many aspiring cooks and food lovers. In addition to being an early foodie, she was also considered a "Hip Nana." With a strong interest in Pop Culture she was able to sing and dance along to the likes of Justin Beiber or Lady Gaga with her granddaughters. In 1991 Marian married Philip Grushetsky - the man who taught her to laugh. Their playful banter was widely known throughout the town - often reading like a Burns and Allen comedy routine. Marian's later life was met by a series of serious health issues which then defined her through her resiliency, compassion for others in their struggles, and inspiring a new creative talent of painting water color flowers. Her expression of beauty became her healing therapy and brought happiness to others. In the final years of her life, her greatest pleasures came from laughing with her grandchildren, avidly playing bridge with wonderful people, her Wegman's friends and morning coffee group, her newfound community at Appleridge Senior Living, her caring family at DaVita Dialysis Center, and her beloved canine companion Paco. Family and friends are invited to McInerny Funeral Home, 502 W. Water Street, Elmira, on Friday, August 11, 2017 from 4:00 p.m. to 7:00 p.m. Marian's Mass of Christian Burial will be held on Saturday, August 12, 2017, 11:00 a.m., St. Patrick's Church, Elmira. Interment will take place in Mt. Olivet Cemetery, Falconer, NY. All are invited to a Celebration of Life Luncheon at Bernie Murray's following the church service. In lieu of flowers, please send donations to the Chemung County Humane Society & SPCA, Route 352, Elmira NY 14903, CareFirst, 3805 Meads Creek Road, Painted Post NY, or the American Cancer Society, 13 Beech Street, Johnson City NY 13790.


Published by Star-Gazette from Aug. 8 to Aug. 11, 2017.
To plant trees in memory, please visit the Sympathy Store.
MEMORIAL EVENTS
Aug
11
Visitation
4:00p.m. - 7:00p.m.
McInerny Funeral Home
502 W. Water St., Elmira, NY
Aug
12
Celebration of Life
Bernie Murray's
NY
Aug
12
Mass of Christian Burial
11:00a.m.
St. Patrick's Church
Elmira, NY
Funeral services provided by:
McInerny Funeral Home
MAKE A DONATION
Please consider a donation as requested by the family.
MEMORIES & CONDOLENCES
Sponsored by The Star-Gazette.
4 Entries
We've lost another of our 'Lush Brothers" friends.
I was witness to Marian's compassion and caring while she cared for one of our group. And all the while experiencing her own health battles. She was friend to many and will be remembered so.
She spoke often of her daughters and grandchildren with joy and love.
My sympathies.
Lynda Warner
August 11, 2017
She was a lovely lady and will be missed by her bridge groups.
Jean
August 10, 2017
So sorry for the family, a blessing for Marian to be pain free at last.
Dave Vestnys
August 9, 2017
Marian has been a friend for many years. Having coffee at Lights bakery every morning for multi years with Brad. Having grown up in Jamestown NY and Marian in Falconer only acouple miles apart we had a lot in common. Spent many good times together. We moved to Fl but saw her at Wegmans for coffee when we were in town. Our sincere condolences to her lovely daughters and grandchildren. She will be missed by all who loved her. Jan and Brad Carlson. Sarasota Fl
Jan and Brad Carlson
August 8, 2017
Showing 1 - 4 of 4 results