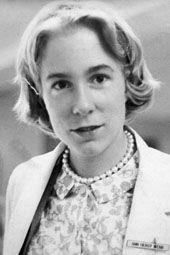 BORN
1938
DIED
2018
FUNERAL HOME
Fellows, Helfenbein & Newnam Funeral Home
200 S Harrison Street
Easton, MD
OXFORD - Ann Heroy Webb, M.D., M.P.H., 80, of Oxford died on Saturday, September 15, 2018 at the University of Maryland Shore Medical Center at Easton. She fell in her home and suffered a traumatic brain injury on Thursday evening.
She was born on Sept. 9, 1938, in New York, NY, the daughter of the late James Harold Heroy Jr. of New York, NY, and Kate Leedy Young Heroy of Birmingham, AL.
She attended Nightingale Bamford School in New York City, Sewickley Academy in Pennsylvania, and St. Timothy's School in Maryland. She received a Bachelor's degree from Vassar College in 1960, an M.D. from the Columbia University College of Physicians and Surgeons in 1964, and completed an internship at the University of Virginia in Charlottesville in 1965. She also received an M.P.H. from the Johns Hopkins Bloomberg School of Public Health in 1972.
During her medical career, she practiced Public Health and also established her own private practice in Easton. She was board certified in three specialties: Family Practice, Geriatrics, and Preventive Medicine. She served at various times as a health officer for Talbot, Dorchester, Caroline, and Somerset counties, and was on the medical staff of Memorial Hospital at Easton.
When she retired, the Maryland General Assembly and Talbot County Commissioners recognized her decades of loyal public service with Official Citations.
Dr. Webb enjoyed tennis, boating, and bridge, and was a world traveler. She was a member of the Talbot Camera Club, the Talbot Cinema Society, and the Harbor Club. She also served on the Board of Directors of the Historical Society of Talbot County.
She is survived by her husband of 57 years, Dr. Charles Albert Webb Jr.; two sons and their wives: Charles Albert Webb III and Carol Ezzell Webb, of Lexington, MA; William Heroy Webb and Dr. Katherine Elizabeth Webb, of Oxford, MD; her three grandchildren are Andrew James Webb and Amelia Christine Webb, of Lexington, MA; and Katherine Theresa Pagano, of Chestertown, MD. She is also survived by her sister and brother-in-law, Kate Heroy Hartley and Louis Aubrey Hartley, of Knoxville, TN; and by her sister-in-law, Karen Ruth Heroy, of Las Vegas, NV. She was preceded in death by a son, James Hollyday Webb, of Oxford, who died in 1991; and by her brother, James Harold Heroy III, of Las Vegas, NV, who died in 2013.
A private graveside service will be held Thursday at the Oxford Cemetery. A service in Celebration of Ann's Life will be held on Thursday, September 20, 10:30 a.m. at the Church of the Holy Trinity, 502 S. Morris St., Oxford, MD.
In lieu of flowers, memorial contributions may be made in her honor to the Critchlow Adkins Children's Center, 133 N. Washington St., Easton, MD 21601, or to the Historical Society of Talbot County, 30 S. Washington St., Easton, MD 21601.
For online tributes, please visit: www.fhnfuneralhome.com.

To plant trees in memory, please visit our Sympathy Store.
Published by The Star Democrat from Sep. 17 to Sep. 18, 2018.
MEMORIAL EVENTS
Sep
20
Celebration of Life
10:30a.m.
Church of Holy Trinity
502 S. Morris St, Oxford, MD
Funeral services provided by:
Fellows, Helfenbein & Newnam Funeral Home
MAKE A DONATION
MEMORIES & CONDOLENCES
Sponsored by Fellows, Helfenbein & Newnam Funeral Home.
2 Entries
I have many fond memories of working with Ann during her tenure as Deputy Health Officer for Talbot County. Her intelligence, concern for the less fortunate in our community, keen sense of humor and positive attitude were always present. My sincere condolences to her family.
Kathy Foster
September 18, 2018
My sincerest condolences to the entire family. May you find comfort among friends and have peace over time. 2kings 20:5
September 17, 2018
Showing 1 - 2 of 2 results