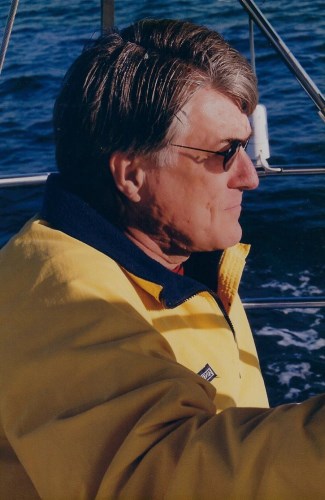 Jack was born on March 23, 1940 in Cumberland Maryland to John Samuel Cook Jr. and Mary Christine (Lebec) Cook. Jack graduated from Allegany High School in 1958, where he was on the high school basketball team. He continued his education at Washington College, where he graduated in 1962. He also was on the basketball team at Washington College. Jack had a long career as a salesman working with government contracts supporting NOAA and NASA.

Jack fell in love with the Eastern Shore and moved back in 2002 when he married his second wife, Barbara. Jack loved volunteering his time. He volunteered at Restore in Easton, and the Tilghman After School Kids program (TASK) helping with their sports programs. He was also involved in the Talbot Mentors program. He loved the water, boating, golf, and was an avid Redskins fan. He also loved country music. Jack was a very social person and made everyone he encountered feel very special. He has been described by his friends as a joy to be around, and lovely kind man. He will be fondly remembered by many whose lives he touched.

Jack is survived by his wife, Barbara Jean Cook, also from Cumberland MD, who graduated from the same high school in 1958. Jack has a son, Michael Stephen Cook and wife Tanya, who live in Charleston SC. They have had 3 children, Kathryn Mary Cook (deceased), Michael K Cook and Sofia B Cook. Jack has a daughter, Stacey Arthur and husband Tom, who live in Severn Md. Stacey has 5 children, Ashley Blakely, Mathieu Blakely, Harley Potter, Megan Arthur, and Timothy Arthur.

A Memorial Service will be held at a later date due to the current health crisis. Arrangements are by Fellows, Helfenbein & Newman Funeral Home in Easton, MD. In lieu of flowers, memorial donations can be made to the Tilghman Volunteer Fire Company, 5996 Tilghman Island Rd, Tilghman MD 21671.
To plant trees in memory, please visit our Sympathy Store.
Published by The Star Democrat on Apr. 8, 2020.
MEMORIAL EVENTS
No memorial events are currently scheduled.
To offer your sympathy during this difficult time, you can now have memorial trees planted in a National Forest in memory of your loved one.
Funeral services provided by:
Fellows, Helfenbein & Newnam Funeral Home
MEMORIES & CONDOLENCES
Sponsored by Fellows, Helfenbein & Newnam Funeral Home.
4 Entries
To Barbara and son Michael,
Jack and I became across the street buddies in 1953 when my family moved to 1002 Holland from Cumberland's West Side. Jack was a year older and in class with my sister, Carole at Allegany. He taught me how to tie a windsor, still my favorite memory every time I do it. He put a real shine on his dress cordovan shoes and we Sunday schooled together. Jack was the one to keep in touch over the years, I did not.
Leland B Ransom II
Neighbor
October 22, 2020
Mr. Jack: I will miss our conversations about the high school years in Cumberland although you graduated from Allegany and I from LaSalle, which you never let me forget. Sorry to lose you, Jack. Mary and Ron Kyhos
Ron Kyhos
April 16, 2020
Ron Kyhos
April 16, 2020
I am gonna miss you old friend. Hope to see you on the other side some day. Your friend, Jack Savage.
Maury Savage
Friend
April 11, 2020