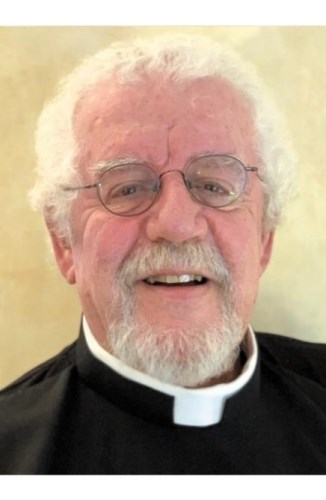 Father Lawler was born December 20, 1946 in Wilmington, DE to James R. and Marguerite (Hahn) Lawler. He attended Christ Our King Parish School in Wilmington, St. Charles College preparatory seminary, Catonsville, MD and St. Mary's Seminary and University in Baltimore. Vastly overeducated, he was ordained a priest for the Catholic Diocese of Wilmington by Bishop Thomas J. Mardaga, D. D. on May 13, 1972.

He served as associate pastor in parishes in Claymont and Wilmington, DE and Elkton, MD. In June, 1983, he was named pastor of Immaculate Conception Church in Elkton. During his term there, he opened the church as an emergency homeless shelter during the winter months. He was appointed diocesan director of the Office for Parish Renewal in June 1990 and coordinated the RENEW Program for all the parishes of the diocese (1991-94). He returned to parish ministry on the Eastern Shore in 1996 when he was named pastor of Mother of Sorrows (Centreville) and St. Peter (Queenstown) churches in Queen Anne's County.

He transferred, at his own request, to Dorchester County, MD and was named pastor of St. Mary Refuge of Sinners (Cambridge) and St, Mary Star of the Sea (Golden Hill) churches in June 2004. During his time in Dorchester County, he worked with other Christian clergy in the Dorchester Ministerial Association, learned Spanish in order to welcome and serve Latino immigrants, became associated with the friends of Bill W., and, in addition, was adopted by his beloved cat, "Senor Gato." During his tenure also, the parish paid off its indebtedness (minus the rectory destroyed by fire in 2015) and started the St. Mary Refuge of Sinners Cemetery where Father Lawler will be laid to rest following the funeral.

Father Lawler retired to Ocean City in 2017 and assisted local parishes when he was not traveling to France (to use up all the French he learned) or Ireland (where he met 45 cousins he never knew he had) or other places. In 2019, he was diagnosed with ALS and moved into assisted living care in Salisbury. He chronicled the progress of his illness on Facebook for as long as he was able.

He was predeceased by his parents and one brother, James R. Jr. He is survived by a brother, Howard J. (Mary) of Omaha, NE and a sister, Mary Anne Dorsey, of Dunnellon, FL and nieces and nephews.

A private interment will be held in St. Mary, Refuge of Sinners Catholic Church Cemetery, Cambridge, Maryland. A Funeral Mass will be scheduled at a later date.

In lieu of flowers, contributions in Father Lawler's name can be made to St. Mary, Refgue of Sinners Catholic Church, 2000 Hambrooks Blvd., Cambridge, MD 21613.

To share online condolences with the family, please visit www.newcombcollins.com

To plant trees in memory, please visit our Sympathy Store.
Published by The Star Democrat on May 1, 2020.
MEMORIAL EVENTS
Funeral Mass
Service details to be determined.
Interment
Private Service
Funeral services provided by:
Newcomb and Collins Funeral Home
GUEST BOOK
Sponsored by Newcomb and Collins Funeral Home.
3 Entries
A wonderful man who's compassion and understanding was something you could feel just by being near him. There will be plenty of stars in his crown!!!
Candy Callaway
Friend
May 10, 2020
In loving memory of a wonderful person. I will love you and miss you always. You were such a great role model to me.
Trish
Family
May 4, 2020
This amazing and talented man did not waste his life. He accomplished many wonderful things by promoting social justice which he believed in strongly. His keen sense of humor, his love and patience with children, his compassion when dealing with anyone in pain, and his correction when a person was way off base and inappropriate with behavior, and yes, he had the inner strength to face his own inner battles and did so with grace and dignity. He filled people's hearts with warmth and joy, and this blossomed into the love people feel for him. For awhile he had the joys of world travel and he was able to take in the beauty of this world in ways that gifted his spirit. But then illness struck with a hard forceful blow, and as he came to terms with the brutality of this, he continued to give in ways that impressed and nurtured us. Now, as we give him back to his Father in Heaven, we can be proud of him and all he accomplished. We can be assured that he knew we loved him, and we know he loved us. Though we could not be with him in body, we were with him in Spirit, in his final hours, and we know he remains in us and us in him until we open our eyes in Heaven are are reunited, we will live on carrying you in our hearts. Thank you Bill for helping us to show God in our actions and inspire hope in others - you served God and us so very well. I love you.
Beverly Tozer
Friend
May 2, 2020