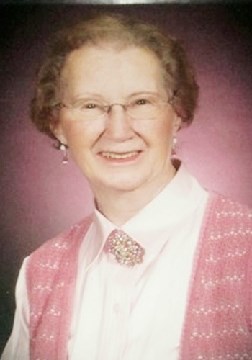 BORN
1922
DIED
2021
FUNERAL HOME
Colyer Funeral Home
2935 Main St
Torrington, WY
Ariel Ivarson July 25, 2021 Ariel Ivarson moved on to heaven on July 25, 2021, at Regional West hospital in Scottsbluff, NE. A memorial service will be held October 2nd at 11:00 A.M., at the First Baptist Church in Torrington, WY, with Pastor Mary Fabin officiating. Burial will be in the Torrington cemetery, next to her husband. Colyer Funeral Home is helping with the arrangements. In lieu of flowers memorials will go to Evergreen Court, Torrington, WY, or Pine Hills Retirement Home in Hot Springs, SD. Ariel was born on March 20, 1922 in Gordon NE to Thomas and Ruth (Maddox) Cushing. She and her older sister Marge attended country schools, later graduating from Gordon High School in 1939. She married her high school sweetheart, Donald G. Ivarson, in 1942 in Los Angeles, CA. He was employed by Lockheed Air Craft Plant. When He joined the military (where he was assigned to fly B-17s in WW II), Ariel took a job as a "Rosie the Riveter" with Lockheed, working in the wing sections of the B-17s. While Donald was training in Amarillo, TX, Ariel was a secretary with a chemical company in Dumas, TX. While he was overseas, she returned to Gordon, NE to have her first son, Neal. After Donald was discharged from the Army Air Corps, they bought a farm unit on the "Mirage Flats" irrigation project south of Hay Springs, NE. Four more children were born and raised there: Janice, David, John, and Gary. After 40 years of hard work and many challenges and successes, they sold their farm and moved to Gering, NE, and on to Torrington, WY 12 years later. They had 61 years of marriage before Donald passed. Next to God, family, and friends, Ariel's special love was music. She sang her first solo when she was 6 years old. She and her sister Marge sang duets and played the piano in church in their early years. She continued to sing in many community venues over the years, including in the church choirs, the community chorus, and the Sr. Citizen kitchen band where she also "played" the wash board. She was an active member in church and related activities. She bowled, gardened, traveled to many baseball and softball games, golfed, helped at the community playhouse and so many other things. How does one cover 99 years of a person's life? She is survived by her children: Neal (Emilie) of Santan Valley, AZ; Janice Russell of Custer, SD; David of Chadron, NE; John of Chico, CA; and Gary (April) of San Diego, CA, and sister-in-law Doris Kuhn of Alliance, NE; her grandchildren: David of Yucca Valley, CA; Jeffrey of Galveston, TX; Jamie, Crystal, and Joshua of Chico, CA; Amy of Custer, SD, and Martin of Casa Grande, AZ. She had 30 surviving great grandchildren and numerous nieces and nephews. Ariel was preceded in death by her husband, Donald, her parents, her sister, and two grandsons, and two grand-daughters. Thanks to the Lord, she lived a long, full life. And she touched so many other people's lives. Was she perfect? No, but forgiven. She was greatly loved and is greatly missed!
Published by The Star-Herald on Sep. 26, 2021.
To plant trees in memory, please visit the Sympathy Store.
MEMORIAL EVENTS
Oct
2
Memorial service
11:00a.m.
First Baptist Church
Torrington, WY
Funeral services provided by:
Colyer Funeral Home
MAKE A DONATION
MEMORIES & CONDOLENCES
Sponsored by Colyer Funeral Home.
0 Entries
Be the first to post a memory or condolences.