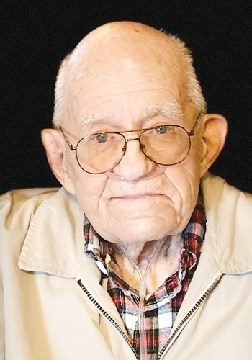 BORN
1924
DIED
2021
FUNERAL HOME
Bridgman Funeral Home - Scottsbluff
2104 Broadway
Scottsbluff, NE
Ben Heimbuck September 4, 2021 Ben Heimbuck, 96 of Scottsbluff, went to be with his Lord and Savior on Saturday, September 4th, 2021. His memorial service will be held at 11:30 a.m., Thursday, September 16th 2021 at Harvest Valley Church in Scottsbluff with Paster Curt Holzworth officiating. Cremation has taken place and there will be no visitation. Private family inurnment will be in the Bayard Cemetery with military honors provided by the United States Navy and Chimney Rock V.F.W. Post No. 9915. Memorials may be made in lieu of flowers to the family and will be designated towards an education fund for his great grandchildren. Online condolences may be left at www.bridgmanfuneralhome.com. Ben was born on October 29, 1924 in Scottsbluff, NE to John and Elizabeth (Gier) Heimbuck. He served in the United States Navy from June 5, 1943 to December 16, 1945 on the USS Renshaw and was a World War II Veteran. He married Lila Inman on August 18, 1947 in Bayard. They moved to Portland, OR for thirteen years. Ben started a trash hauling business in Pine Bluffs, WY. They eventually moved to Gering, NE in 1967 and continued in the trash business. It was also in Gering, where they raised their two children, Tim and Kathy. Ben was a hardworking man who would do anything for his family and friends. Once retired, Ben and Lila enjoyed traveling in their motorhome. Along with being an avid football fan of the Denver Broncos and Nebraska Huskers, he enjoyed remodeling and fixing things around the house. Most of all, he loved spending time with his family. Survivors include his son, Tim Heimbuck and his wife Kim (Harimon) of Ft. Collins, CO: two granddaughters, Amber Heimbuck of Ft. Collins, CO, Heidi Steinbrecher and her husband Elijah; great granddaughter, Brynlee Steinbrecher of Greeley, CO. Ben was preceded in death by his parents, John and Elizabeth (Gier) Heimbuck; wife, Lila Heimbuck; daughter, Kathy Heimbuck; brothers, Dave Heimbuck, Adam Heimbuck; sisters, Lydia Urback, Molly Pelster, Dolly Pierce; half-brothers, John Heimbuck, Harry Heimbuck, Henry Heimbuck, George Zitterkopf, Jake Zitterkopf; half-sisters, Emma Weiglin, Mary Abeyta.
Published by The Star-Herald on Sep. 12, 2021.
To plant trees in memory, please visit the Sympathy Store.
MEMORIAL EVENTS
Sep
16
Memorial service
11:30a.m.
Harvest Valley Church
Scottsbluff, NE
Funeral services provided by:
Bridgman Funeral Home - Scottsbluff
MAKE A DONATION
MEMORIES & CONDOLENCES
Sponsored by Bridgman Funeral Home - Scottsbluff.
3 Entries
So sorry to hear of your father´s passing. Always enjoyed seeing him and your mom in church many years ago.
Jeanne Fyfe
Other
September 18, 2021
So sorry to hear of Bens passing. He was a legend. Ben and Lila were great friends to our family for so many years. He will be so dearly missed. Love to you Tim and Kim. I wish I had been able to be there for the service. Will keep you in our prayers.
Rick and DeAnn Richter
September 17, 2021
Our world is much, much less in Ben Heimbuck's absence. You truly couldn't find a better man on this planet, and certainly no finer friend. The laughter, joy and fellowship we enjoyed with Ben and his wonderful family have left the rest of us with countless wonderful memories we will genuinely cherish for the rest of our lives. Boating at Lake Minatare, breakfast in the Wildcat Hills, cheering for Nebraska every Thanksgiving, making homemade ice cream at the park, even just the simple conversations on a warm summer evening. For those Ben called "friend", I hope you realize what high tribute you've been paid. Our sorrow on learning of this loss is tempered by the knowledge that Ben is reunited with his beloved wife Lila and daughter Kathy, and they now all stand together in the presence of the Almighty. I'd like to have seen the line of smiling faces and outstretched hands waiting to welcome him into the Great Hereafter. I'll bet it stretched across half of eternity. Welcome home, Ben. We will miss you, until that day when we are all called Home. The Willet family
Phillip Willet
Friend
September 15, 2021
Showing 1 - 3 of 3 results