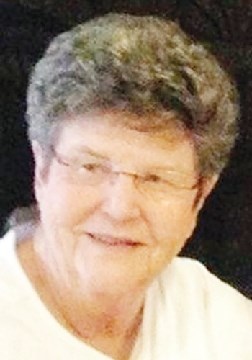 BORN
1936
DIED
2020
Caroline M. Wilhelm November 17, 2020 Caroline M. Wilhelm, 84, of Gering, NE, passed away peacefully at home on November 17, 2020 surrounded by her loving family. Caroline was born July 16, 1936, in Scottsbluff, NE, the daughter of David and Katie (Green) Schwartzk-opf. She had three siblings, Esther (William Siegel), Robert (Norie Schwartzk-opf), and Dorthy (Bill Zimmerman). She graduated from Scottsbluff High School Class of 1955 and attended Scottsbluff Junior College. On February 24th, 1956 she married Robert E Wilhelm. During February 2020, they celebrated their 64th anniversary. To this union, they had three children. Caroline worked as a bookkeeper which she enjoyed thoroughly. Caroline's greatest passion was being a wife, mother, grandmother, and great-grandmother. She loved gardening, cooking, and playing bingo, but most of all she loved her family, holidays, and family gatherings. She was a mother to everyone and all the kids in the neighborhood looked up to her. A stranger to no one, she had a beautiful smile that could light up any room. Caroline is preceded in death by her parents; sister Esther; brother Robert; son-in-law Brad; in-laws Carl and Sarah Wilhelm, Marge and Ruben Stricker, and niece Diana Vieselmerer. She is survived by her husband Robert; sister Dorthy; children Jeff (Wilhelm), Kim (Brad) Ockinga, and Karla (Mike) Rowe; grandchildren Kaleb (Katrina), Jesse, Koltn (Macrissa); as well as great-grandchildren Bentley and Katie. A private family service will be held Monday November 23, 2020. Public service will be held and announced at a later date. In lieu of flowers, please direct memorials to St. Jude Children's Research Hospital in Caroline's name. Online condolences may be left for the family at www.bridgmanfuneralhome.com.
To plant trees in memory, please visit our Sympathy Store.
Published by The Star-Herald on Nov. 21, 2020.
MEMORIAL EVENTS
No memorial events are currently scheduled.
To offer your sympathy during this difficult time, you can now have memorial trees planted in a National Forest in memory of your loved one.
Funeral services provided by:
Bridgman Funeral Home
GUEST BOOK
3 Entries
Sorry for your loss my heart goes out to family
Rocky Clause
November 29, 2020
Our thoughts and prayers are with you and your family during this extremely hard time of losing your mother. We pray you feel God´s hand upon you and the love of your friends and family surrounding you.
Mickey and Michelle Kincaid
November 25, 2020
My sincere sympathy for your loss of Caroline she was a beautiful soul and loving wife mother grandmother and great grandmother. She will be greatly missed. I'm so very sorry for your loss.
GaleMartin
November 21, 2020