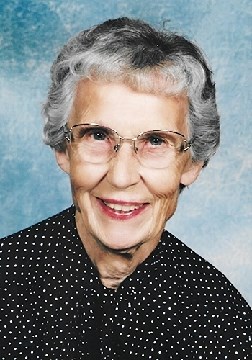 BORN
1924
DIED
2020
Cecilia Arline Schaefer November 11, 2020 Cecilia Arline Schaefer, 96, from Harrison, NE passed away at Heritage Estates, Gering, NE on November 11, 2020. A private family service will be held at the Church of the Nativity, Harrison, NE on November 14, 2020. Chamberlain Chapel of Chadron is in charge of the arrangements. Arline was born in south Sioux County to Albert and Mary (Roland) Holmgren on July 11, 1924. She went to school at Curly School (District 12) and to Sioux County High School, graduating in 1941. Arline taught for seven years in Sioux County schools before marrying Charles Schaefer in 1948. To this union five children were born: Robert, Joe, Mary, Marjorie, and John. Charles and Arline lived on the Schaefer Ranch until 1952, when they moved a house into Harrison, where they continued to reside most of their lives. About 1960, Arline began taking classes through Chadron State College, eventually receiving her Bachelor of Science degree in Elementary Education in 1971. In 1967, she accepted a teaching position at Harrison Grade School where she taught until her retirement in 1982. Arline was active in the Harrison community, serving as a Cub Scout leader, 4-H leader, and member of Sioux County Historical Society, Sioux County Alumni Association, VFW Ladies Auxiliary, and St Theresa's Altar Society. She and her husband, Charles, were active in the Catholic Church of the Nativity. Arline is survived by children: Joe (Patty) Schaefer of Omaha, NE; Mary (Tom) Willnerd of Spearfish, SD; Marjorie (Gary) Kelley of Scottsbluff, NE; and John (Deb) Schaefer of Belle Plaine, MN; sister Rebecca Smith of Mission, SD; sister-in-law Margy Holmgren of Alliance, NE; and numerous grandchildren and great-grandchildren. She is preceded in death by her husband Charles Schaefer; son Robert Schaefer; three sisters: Alberta Richmond, Jane Publow Skavdahl, and Mary Ann Modin Baack; and brothers: Alan "Pat" Holmgren, and Jim Holmgren. A memorial has been established for Sioux County Historical Society or Donor's Choice. Donations can be sent to Chamberlain Chapel, PO Box 970, Chadron, NE 69337.
To plant trees in memory, please visit our Sympathy Store.
Published by The Star-Herald on Nov. 14, 2020.
MEMORIAL EVENTS
No memorial events are currently scheduled.
To offer your sympathy during this difficult time, you can now have memorial trees planted in a National Forest in memory of your loved one.
GUEST BOOK
1 Entry
What a wonderful lady . What a legacy in family she has given us. Gene Roland
Gene Roland
November 14, 2020