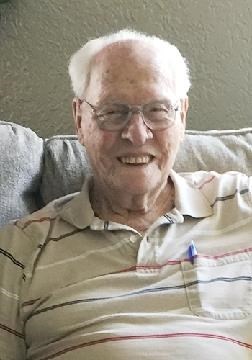 FUNERAL HOME
Colyer Funeral Home
2935 Main St
Torrington, WY
Gerald "JC" Childs September 18, 2021 Gerald "JC" Childs, 94, passed away in his favorite chair at his home on September 18, 2021. He was preceded in death by his parents, Francis Milford Neal Childs and Marie Ruth Gaskill, the love of his life, Dolores Morris Childs, two brothers, one sister, grandson, Zachary Blue Childs, and great granddaughter, Jael Haught. Arrangements are under the direction of the Colyer Funeral Home and friends may send condolences to the family at www.colyerfuneralhome.com. He was born in Albion, NE on February 18, 1927, and lived in Torrington for 54 years. He attended Albion schools. He took pride in working at his grandfather's newspaper, the Albion Argus, followed by his career with Kansas Nebraska Natural Gas, where he retired as district manager in the late 80's. He was a longtime member of Saint Rose Catholic Church, Rotary Club and Cottonwood Country Club. His interests included golf, hunting, going to garage sales, red beers, karaoke, yodeling and music in general. Above all, JC loved spending time with family. He loved Christmas Eve and the 4th of July, mainly because those holidays included gathering the large family that he and Dolores cherished. JC was a friend to many and he had a knack for chatting up friends, neighbors, and strangers alike. He had a gift of making everyone feel special. His word and his handshake were solid, and you could count on him always. His smile lit up a room and if he loved you, he wasn't afraid to show it. He had a mischievous sense of humor and never passed up the opportunity to crack a joke. A witty thinker who loved clever sayings, he knew the meaning of "circumstances alter cases", which was a phrase he used often and applied to how he lived his life. He led by example, loved and honored his family his legacy. JC is survived by his children Duane (Jane) Childs of Glenville, NE, Robert (Bonnie) Childs, James (Jackie) Childs, Gary (Marilee) Childs, Steven (Kathy) Childs, Julie (Doug) Haught all of Torrington, Cindy (David) Haught of Spearfish, SD; twenty-one grandchildren, over 50 great grandchildren and five great-great grandchildren. Services will be at St. Rose Catholic Church in Torrington, WY on September 28th with a Rosary at 1:00 p.m. and Funeral Mass of Christian Burial will be celebrated at 1:30 p.m., followed immediately by interment at Valley View Cemetery. Friends and family are invited to gather at Cottonwood Country Club following interment. Memorial contributions can be made in Jerry's name to St. Rose Catholic Church or Cottonwood Country Club.
Published by The Star-Herald on Sep. 23, 2021.
To plant trees in memory, please visit the Sympathy Store.
MEMORIAL EVENTS
Sep
28
Rosary
1:00p.m. - 1:30p.m.
St Rose Catholic Church
605 E, Torrington, WY
Sep
28
Service
1:30p.m. - 2:30p.m.
St Rose Catholic Church
605 E, Torrington, WY
Funeral services provided by:
Colyer Funeral Home
MAKE A DONATION
MEMORIES & CONDOLENCES
Sponsored by Colyer Funeral Home.
2 Entries
Jim and I spent some great times with Jerry and Delores. She spent a day "cuddling" and making over our daughter Jamie during a great day of just "hanging out" many years ago. Great people! Condolences and prayers to family
Jim and cherry mckimmey
Work
September 25, 2021
Thoughts and prayers with you all
Dewey and Darlene Zerr
September 23, 2021
Showing 1 - 2 of 2 results