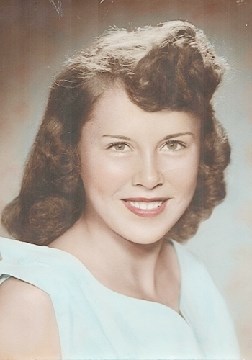 BORN
1938
DIED
2020
Glenda Ockinga October 31, 2020
Glenda Ockinga, 82, went to her heavenly home on October 31, 2020. She has been reunited with her loving husband, Francis Ockinga, her first son Bradley, and her first grandchild Daniel Lewis; along with many more very important family members. Glenda was born on a beautiful Sunday, February 27, 1938 to Manual and Millie(Fisher)Wolfe in Scottsbluff, Nebraska. She was the third of seven children, five girls and two boys.

While still in high school, Glenda met and fell in love with Francis Ockinga. In 1955 Francis joined the Navy. When he returned from boot camp in October of that year, they both realized they couldn't stand to be apart from each other again, so Francis proposed and when Glenda said yes; they were married on Wednesday, October 26, 1955. Francis and Glenda went east to Virginia, where they resided until Francis finished his Naval tour. They then were so happy to return to Scottsbluff where they lived until they eventually purchased their home in Gering in 1965 to raise their family in; which at the time, consisted of 3 children: Bradley Francis, Michael Allen, and Brenda Lee.

In 1967 they moved to Sturgis, South Dakota where Francis went to work for the Homestake Mining Company. While living in Sturgis, their fourth child, Kelly Korene was born on Halloween night, thus completing their happy family.

After living in South Dakota for almost a year, they made the decision to move back to Nebraska. Settling back in Gering, they lived happily until 1977. That was when Francis was taken from us much too soon, at the age of 40. Glenda remained in the Gering home, continuing to raise her children alone. She never remarried. Instead, she just poured all of her love and devotion into her family throughout the years. Watching it grow to where she ultimately had 8 awesome grandchildren (now 7), and 13 amazing great-grandchildren. She was always proud of her children and especially proud of her grandchildren and great-grandchildren whom she loved getting to spend time with. She dedicated her whole life to her family that she loved with everything she had. Everyone, friends and family alike, knew Glenda had one of the biggest, kindest hearts ever! A heart overflowing with love.
Glenda always enjoyed exercising and was an avid walker year round. She loved bicycling, bowling, jogging and running. She could run further and longer than anyone in her family. She loved the outdoors and you could often find her enjoying the weather sitting out on her porch.

To plant trees in memory, please visit our Sympathy Store.
Published by The Star-Herald on Nov. 22, 2020.
MEMORIAL EVENTS
No memorial events are currently scheduled.
To offer your sympathy during this difficult time, you can now have memorial trees planted in a National Forest in memory of your loved one.
GUEST BOOK
2 Entries
Mike, Brenda & Kelly I am so sorry to hear of Glenda's passing. I will always remember her stern look when we got in trouble, how the world stopped each morning for The Young & the Restless. And I miss her awesome spaghetti even today! My prayers are with each of you during this difficult time. Zoe (Van Winkle) Coleman
Zoe A Coleman
November 24, 2020
My prayers for her family. Glenda was childhood friend , A cheerful and friendly person.
Manuel Castillo (Sonnie)
November 23, 2020