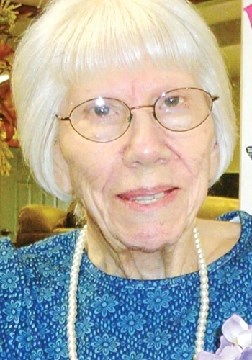 BORN
1928
DIED
2020
Helen G. (Strauch) Baum November 9, 2020 Helen G. (Strauch) Baum, 92 of Heritage Estates in Gering, NE died on November 9, 2020. Her funeral will be held Saturday, November 14, 2020 at Bridgman Funeral Home at 10:00 a.m. with interment to follow at Sunset Cemetery. The family asks that masks be worn. Memorials may be given to St. James Lutheran Church. Online condolences may be made by viewing Helen's memorial page at www.bridgmanfuneralhome.com. Bridgman Funeral Home in Scottsbluff is entrusted with arrangements. Helen was born on September 8, 1928 at the Methodist Hospital in Scottsbluff to Albert and Grace (Donbraska) Nelsen. At an early age she moved to Wyoming and attended schools in Torrington, Ft. Laramie, Hawk Springs and Lingle. She was united in marriage to the love of her life, Henry Strauch on March 8, 1947 and had three children, Judy, Jerry and Shari. They farmed in the Dutch Flats area until Henry's death in 1964. On July 11, 1970 she married Reuben Baum. They lived in Bayard until 1989 when they moved to Gering. Helen became a member of St. James Lutheran Church in 1947 and was a member of St. James Dorcas Society. Helen is survived by her daughters Judy (Steve) Lewis of San Tan Valley, AZ and Shari (Dean) Kamerzel of Gering, NE; daughter-in-law Cindy Strauch of St. Francisville, LA; grandchildren Nic Dolberg and Lisa Foster; great-grandsons Jackson Foster and Henrik Dolberg; half-sister Marty Wamboldt of Cheyenne, WY; and three stepchildren. She was preceded in death by her parents; sister Alice Miller; step-mother Isabella Nelsen; half-brothers Arthur Nelsen and Albert Nelsen, Jr.; sister Opal Nelsen; half-sisters Alberta O'Dell and Betty Nelsen; son Jerry Strauch; son-in-law Ron Dolberg; and two grandchildren Ronnie Dolberg and Brenda Dolberg. The family would like to thank Hospice and the nurses at Heritage Estates for all of their caring and compassion and a special thank you to mom's guardian angel, Angela at Heritage for taking extra care of mom during the last few months.
To plant trees in memory, please visit our Sympathy Store.
Published by The Star-Herald from Nov. 11 to Nov. 13, 2020.
MEMORIAL EVENTS
No memorial events are currently scheduled.
To offer your sympathy during this difficult time, you can now have memorial trees planted in a National Forest in memory of your loved one.
Funeral services provided by:
Bridgman Funeral Home
GUEST BOOK
2 Entries
May God's promise found in John 6:40, of the hope to see our loved ones again, comfort your heart and give you peace, strength, and hope in the days ahead.
Y.
November 15, 2020
Pleasant memories of your mom's smiling face when we played music at The village and of seeing her with all her friends at her 90th birthday celebration. We know she will be missed greatly, but remembered fondly.
Peggy Wymore
November 14, 2020