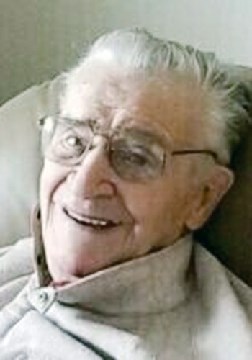 BORN
1923
DIED
2021
FUNERAL HOME
Dugan-Kramer Funeral Chapel
3201 Avenue B
Scottsbluff, NE
Howard Franklin Moranville September 15, 2021 Howard Franklin Moranville of Mitchell, Nebraska passed away at the age of 98, on Sept. 15, 2021 at the Medical Center of the Rockies in Loveland, CO. His remains were cremated per his request. I was born on February 21, 1923 at Hemingford, NE to the parents of Lela (Barrett) and Harold Moranville. I was delivered by my Grandfather Dr. C.F. Moranville. I spent my early years going to school in Hemingford, NE until 1937 at which time I moved with my family to Lyman, NE for the summer. I spent most of that summer with my younger brother, Gordon, at Little Moon Lake where we camped out. We sold minnows to fishermen and walked to Henry, NE for groceries. Then my Aunt Maude would cook the bull frogs that we caught with our fishing poles. My family then moved to Bayard, NE just in time to start school, graduating in 1940. I worked a year after graduation in Bayard, and then moved to California after being hired at the North American Aviation Co. wiring Bombay racks for the B25 bombers and the P51 Mustangs. While working there, I received my draft notice, and I requested to have 30 days before reporting. I returned to Bayard where I enlisted in the Navy. I, along with my brother, Gordon, and five other friends joined the Navy in November of 1942. I went to the Navy electrician's school at the University of Minnesota and from there to San Diego Naval Base where I attended the Sound Motion Picture School. I spent time in Texas and California bases, and served as an Electrician Mate 1st Class in the Pacific aboard the APA 72. I was awarded a Bronze Metal for the battle of Okinawa and was discharged in February of 1946. I married Jean Roland on Sept. 25, 1946 and from that marriage four children were born: James, Sandra, Boni and Gary. After my brother, Gordon, and I were discharged from the navy, we maintained an electric shop in Bayard, NE until 1951. I then went to work for Great Western Sugar Company and continued there until 1955, at which time I then went to work for Roosevelt Public Power District as Manager in Mitchell, NE. During my tenure there the Board of Directors provided a free gate admission at the county fair. The Board of Directors and the Gering Valley Public District merged together in January of 1969. The Board of Directors bought out the Rural Electric Association (REA) organization because of the higher interest rates they would be required to pay staying with the REA. This was finalized in 1992. I was a Director to Tri-State G & T of Thornton, CO from 1973 until my retirement in 1988. I spent 33 years with the Roosevelt Public Power District. I was a member of the Kiwanis Club, American Legion, Masonic Lodge, and a lifetime member of the Veterans of Foreign War. I married Dorothy Stone in 1975 and she had three children from a previous marriage: Wayne, Roxi, and Marsha. Dorothy and I traveled extensively before and after my retirement and enjoyed the game of golf. Being a huge Husker fan, there was a lot of fun and ribbing that took place whenever The Big Red played Oklahoma (where Dot was born and raised). I was baptized at the WestWay Christian Church on Feb 16, 2006. Dorothy and I were members of a small group where we made special friends and memories. Some of my special memories were playing pitch with the REA gang and with kids and grandkids. One of my favorite pastimes was ranching on Section 13. I always enjoyed golfing, and loved helping or contributing to family, friends, and organization's electrical needs. I always enjoyed my son-in-laws jokes which kept me in good humor. I remained living in my home in Mitchell until March of 2019 at which time I moved to the Good Samaritan community in Loveland, CO to live closer to three of my kids. I am survived by my sons: James (Linda) Moranville of McCool Junction, NE; Gary (Pam) Moranville of Severance, CO; and daughters; Sandra (Craig) Kern of Estes Park, CO; Boni Waddle of Johnstown, CO; my stepson Wayne (Sincere) Stone from Gurnee, IL, and stepdaughters: Roxanne (Darrell) Boyer of Rapid City, SD; Marsha Stone of Hastings, NE; a sister-in-law Marlene Moranville and numerous nieces, nephews, grandchildren and great-grandchildren. Preceding me in death were my parents Lela and Harold, first wife Jean Roland Moranville and second wife Dorothy Stone Moranville, sister and brother-in-law Marcylene and George Mason, brother Donald Moranville, brother and sister-in laws; Bill and Mildred Moranville, Gordon and Lorene Moranville; son-in-law Dennis Waddle and special friend in later years, Lillian Blehm. A Memorial Service will be held October 2nd at 10:00 am at the Dugan Kramer Funeral Home in Scottsbluff, NE with a private interment at the cemetery in Bayard, NE. Memorial donations in memory of Howard may be made to: St. Jude Children's Research Hospital or Good Samaritan Society - Loveland at 2101 S Garfield Ave, Loveland, CO 80537.
Published by The Star-Herald on Sep. 26, 2021.
To plant trees in memory, please visit the Sympathy Store.
MEMORIAL EVENTS
Oct
2
Memorial service
10:00a.m.
Dugan-Kramer Funeral Chapel
3201 Avenue B, Scottsbluff, NE
Funeral services provided by:
Dugan-Kramer Funeral Chapel
MAKE A DONATION
Please consider a donation as requested by the family.
MEMORIES & CONDOLENCES
Sponsored by Dugan-Kramer Funeral Chapel.
2 Entries
Howard had the greatest smile and made the Best Grilled Chocolate sandwiches I ever had. Actually the Only one I ever had!! Remember you fondly, R.I.P. Howard Jamie
Jamie Johnson
Friend
October 4, 2021
Jim, Sandi, Gary, Boni and families, I am very sorry to hear of your loss. I have fond memories of your Dad and the good times with your family at Mitchell, Nebraska. Howard was always good to me. My sincere sympathy.
Vaughn I Patrick
September 27, 2021
Showing 1 - 2 of 2 results