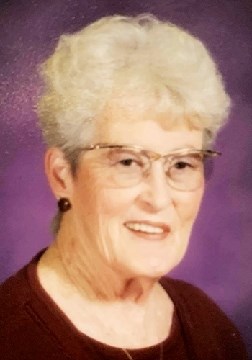 FUNERAL HOME
Jones Mortuary
1532 14th St
Mitchell, NE
Irene Shields September 7, 2021 Irene Shields, 89, of Mitchell, passed away peacefully in her home on Tuesday, September 7, 2021. Cremation has taken place at her request. Her memorial service will be held at 3pm on Saturday, September 11, 2021 at the Mitchell Elementary Gym with Pastor Rick Reisig officiating. Irene requested for all attendees to come dressed in their finest Husker game day gear. Private family inurnment will take place at Mitchell Cemetery. The family respectfully requests that in lieu of any flowers, memorials in Irene's honor be made in care of the family to be designated at a later time. Online condolences and stories may be shared at www.jones-mortuary.com. Jones Mortuary in Mitchell is entrusted with arrangements. Irene was the firstborn and only girl to three brothers of her family that started in Bingham, NE. Soon after their births her family moved to Scottsbluff, NE where she attended elementary through high school. She graduated high school in 1950 and married her husband Dale Shields on December 4th, 1955. Irene and Dale had two children, Steven and Susan. In 1967, Irene and her husband moved to Mitchell. That same year, her husband passed away and she started her career in the Mitchell Public School system. While working at MPS Irene met her second companion, Don Simpson. She and Don spent many happy years together before he passed away in 2002. Irene was a woman of many talents and wore many hats during her 46-year stint at Mitchell elementary, but perhaps her biggest talent was getting to know every soul that ever had the privilege of crossing her path. From the thousands of students and possibly hundreds of teachers, to the 6 principals and 6 superintendents that had the privilege of working with her, it is an understatement to say that she impacted the lives of many. Her biggest joy in life, however, came in the form of her family and the friends that she called family. She was the official grandmother of seven and great-grandmother of eleven, but an honorary grandmother to many. Irene could often be found in just a few places: the school, her home, her yard, or at whatever function was going on for her children and grandchildren. She was an amazing mother and grandmother, second to none. Selfish was never a word used to describe this woman as she was always there for anyone and everyone. In 2014, Irene retired from the job she loved at MPS with a heavy heart. Irene spent her retirement and final years enjoying her family, friends, and dogs. She traveled when she could and gardened until we told her she couldn't anymore. She spent her last few days surrounded with family and love. Irene is survived by her brother: Lionel (Glenda) Marshall; Children: Steve Shields, Sue Marsh; Grandchildren: Melissa (Greg) Bieker, Roger Shields, Carissa Riedman-Shields, Randy (Hannah) Shields, Nate (Aimee) Marsh, Hope (Chris) Gillaspy; Great-Grandchildren: Felicity, Josie, Elijah, Malachi, Jaxon, Bryden, Easton, Copper, Brody, Luke, and Max; and numerous nephews and nieces. Irene is preceded in death by her parents Jack and Mildred Marshall, husband Dale Shields, companion Don Simpson, brothers Arnold and Jack Marshall, son-in-law Alex Marsh, and grandson Nick Marsh.
Published by The Star-Herald on Sep. 10, 2021.
To plant trees in memory, please visit the Sympathy Store.
MEMORIAL EVENTS
Sep
11
Memorial service
3:00p.m.
Mitchell Elementary Gym
NE
Funeral services provided by:
Jones Mortuary
MAKE A DONATION
MEMORIES & CONDOLENCES
Sponsored by Jones Mortuary.
2 Entries
Steve, Sue and family, So very sorry to hear of your mom passing. She was such a vibrant person with such a big heart. Please know you are in our thoughts and prayers.
George and Lisa Hernandez
Friend
September 11, 2021
I was saddened to hear that Mrs. Shields passed away. She was such a big part of my life growing up in Mitchell. May your family feel God's comfort during this very difficult time.
Myrna (McCabe) Olivarez
September 10, 2021
Showing 1 - 2 of 2 results