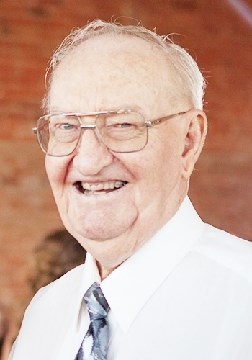 BORN
1924
DIED
2020
Johnny P. Andreas, Jr. November 7, 2020 Johnny Philip Andreas Jr. passed away November 7, 2020 at the age of 96. He was born on January 2, 1924 to John Philip Andreas Sr. and Elizabeth (Kniss) Andreas in Bayard, NE and was given the nickname "Sonny". Johnny met Marjorie Vick on the dance floor and married her on November 27, 1949 at Zion Evangelical Lutheran Church in Bayard. Johnny was a proud, lifelong farmer and rancher, with farms in McGrew, Minatare and 33 years in the Red Willow Community northeast of Bayard. Johnny was innovative and developed four farms, making them more productive. Johnny was a longtime board member of the Nebraska Rural Electric Association, and he and Marj were longtime members of the Faith United Church of Christ in Bayard. In 1990, after retiring, he and Marj moved to Scottsbluff, where he enjoyed his grandchildren, golfing, swimming at the YMCA, playing horseshoes (with many trophies), traveling, and shooting the breeze with friends over a cup of coffee. He was also a phenomenal pinochle player, and taught many of his grandkids and their spouses how to play just so he could beat them with skill, wit, and charm. His love for cars led him to take a part-time job driving cars for auto dealerships in Scottsbluff and he continued this pursuit for several years. Johnny will be remembered for his charming and witty personality, his love for dancing (which earned him the nickname "Blonde Bomber"), and the special relationship he had with his wife Marj, children, grandchildren, great grandchildren, in-laws, nieces and nephews, and his many friends. Survivors include his wife Marj, daughter Connie (Mike) Broderick, Sublimity, OR; son, Brian, Cheyenne, WY; daughter, Rhonda (Jim) Martin, Elkhorn, NE; daughter Deb (Sam) Serda, Scottsbluff, NE. Sister-in-law Eldora Andreas, Gering; seven grandsons and families: Kirby (Brownwen) Broderick, Scott (Carissa) and Nathan (Samantha) Martin, Adam (Sierra) and Andrew Ostdiek, Josh and Zach (Becca) Serda, five granddaughters: Amy (Brian) Moore, Holly (Will) Woods, Vanessa Larkman, Melissa Serda, and Samantha (Edward) Alvizar; twenty-one great-grandchildren (including one new one just a few days before he passed), and numerous nieces and nephews. He will be lovingly remembered by all. He was preceded in death by his son John Paul, parents, sister Mary Huck, brother Fred, sister Molly Bauer, brother Herman, sister Helen Reichert, sister Esther Andreas, and brother Harold. Due to COVID-19, a celebration of Johnny's life will be announced at a later date. A memorial has been established to the Faith United Church of Christ, and can be sent directly to Faith United Church of Christ, PO Box 250, Bayard, NE 69334. Cards and condolences can be sent Marjorie Andreas, 111 W.36th St. #620, Scottsbluff, NE 69361. Online condolences may be left at www.dugankramer.com
To plant trees in memory, please visit our Sympathy Store.
Published by The Star-Herald on Nov. 12, 2020.
MEMORIAL EVENTS
No memorial events are currently scheduled.
To offer your sympathy during this difficult time, you can now have memorial trees planted in a National Forest in memory of your loved one.
GUEST BOOK
4 Entries
I am so sorry to read about your Dad. He was a special man and I have many good memories of his sense of humor. I´m sure you will miss him terribly. Prayers to your family.
Jeri Lynn Stoltenberg Brammer
November 14, 2020
I can only imagine a big pinochle game with our parents Wayne and Olivia Swank. Johnny and Mark were dear friends of theirs and always looked forward playing cards with them. Remembering him with love from Ron and Teresa Swank
Teresa Swank
November 13, 2020
May God's promise found in John 6:40, of the hope to see our loved ones again, comfort your heart and give you peace, strength, and hope in the days ahead.
Y.
November 12, 2020
Growing up with Uncle John in my life will always be remembered. He was so fun. He will be missed but is with his family in heaven. They are all together now.
Sharon Peppler Johnson
November 12, 2020