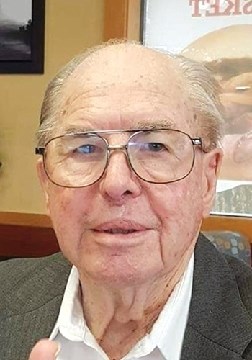 BORN
1924
DIED
2021
FUNERAL HOME
Gering Memorial Chapel
1755 11th Street
Gering, NE
Rodney (Rod) Aaron Barge September 5, 2021 Rodney (Rod) Aaron Barge, 96, of Gering, passed away peacefully at his home on Sunday, September 5, 2021. Rodney was born November 22, 1924 in Midwest, Wyoming to Aaron and Minnie (Erickson) Barge. The family lived a short time in Texas and then moved to the Kearney, Nebraska area. He attended primary school in a one-room schoolhouse and then attended Kearney High School for three years. He graduated from Gering High School in 1942. He entered the United States Army on May 15, 1943 and served in the Pacific campaign until his honorable discharge on January 6, 1946. Rodney was united in marriage to Jane Bernice Barth on October 21, 1950 in Hay Springs, Nebraska. The couple made their home and raised their family in Gering. In August of 1949 he worked for the US Postal Service in Gering as an in-town mail carrier, later worked as a service clerk and then as a rural mail carrier until retiring in November 1988. Rodney was an active member of the Church of Christ, providing encouragement and support to many throughout the years Rodney is survived by his children Sandra (David) Stuart of Fryeburg, ME; Dianne Davis of Platte City, MO; Craig Barge of Vega Baja, Puerto Rico; Donnetta (Lauren) Snell of North Platte, NE; Rhonda (Ron) Hansen of Johnstown, CO and Kirk (Kathy) Barge of Gering, NE. Grandchildren Shari Rider, Trudy Osborn, Bruce Stuart, Joseph Stuart, Alexander Stuart, Barbra Elmshaeuser, Jerry Davis, Trisha Snell, Mark Snell, Heidi Hansen, Natalie Prokop, Cody Barge, Jen Berendes, and Brent Barge; 20 great-grandchildren, sister-in-law Phyllis Barth and numerous nieces and nephews. Rodney was preceded in death by his parents, Aaron and Minnie, his wife Jane, his sister Fern Beck, brother-in-law Cecil Beck and son-in-law Larry Davis. The family of Rodney wishes to extend sincere thanks to Nurses Deb and Shelley at RWMC Urology Department, Nurse Mike from RWMC Home Health, Nurse Nicole from RWMC Hospice and neighbor Mike who kept an eye on him. Visitation will be held from 4 to 7 PM Thursday, September 9, 2021 at Gering Memorial Chapel. His funeral service will be held at 2:30 PM, Friday, September 10, 2021 at Bluffview Church of Christ with Gary Nichols officiating.The service will be live streamed on the Gering Memorial Chapel Facebook page. Burial will follow at Sunset Memorial Park Cemetery with military honors by the Nebraska National Guard's Honor Guard. Memorials may be given to South Sudan African Missions or Bluffview Church of Christ. Online condolences may be left at www.geringchapel.com.
Published by The Star-Herald on Sep. 9, 2021.
To plant trees in memory, please visit the Sympathy Store.
MEMORIAL EVENTS
Sep
9
Visitation
4:00p.m. - 7:00p.m.
Gering Memorial Chapel
1755 11th Street, Gering, NE
Sep
10
Funeral service
2:30p.m.
Bluffview Church of Christ
NE
Sep
10
Funeral service
2:30p.m.
live streamed on the Gering Memorial Chapel Facebook page
NE
Funeral services provided by:
Gering Memorial Chapel
MAKE A DONATION
MEMORIES & CONDOLENCES
Sponsored by Gering Memorial Chapel.
5 Entries
Mr. Barge was always a pleasure to care for. He always greeted me with a smile, a handshake and his wonderful humor. I was blessed to meet him and his caring family. Deepest Sympathies.
Mike Home Care
September 10, 2021
I am so sorry for your loss. I am sorry I can't be there since I am out of town. Hugs to you all!!
Sharon Werner
Friend
September 10, 2021
Prayers for the family, we were blessed to have such a kind loving man for an Uncle. We'll miss him.Sorry we can't attend the service today but know you're in our thoughts and prayers.
Leroy Watson & family
Family
September 10, 2021
What a amazing loving man. Only had a short time with Rodney but enjoyed every minute of it. Great example and God love man.
Brad Brennfoerder
September 9, 2021
I am so sorry I couldn't be with you for Rodney's service. My prayers are with his family.
Gary Werner
Friend
September 9, 2021
Showing 1 - 5 of 5 results