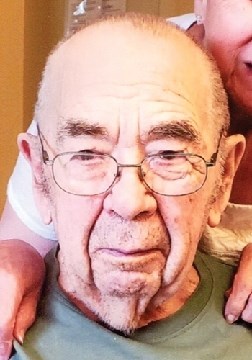 FUNERAL HOME
Bridgman Funeral Home - Scottsbluff
2104 Broadway
Scottsbluff, NE
Ruben Herbert Green July 3, 2021 Ruben Herbert Green, 91, of St. Paul, formally of Bayard passed away July 3, 2021 at Grand Island. A graveside service will be held 10:30 a.m., Friday, July 16, 2021, at the Bayard Cemetery in Bayard with Pastor Tom Smith officiating. Inurnment will be in the Bayard Cemetery. Memorials may be made to Faith United Church of Christ. Online condolences may be left at www.bridgmanfuneralhome.com. Bridgman Funeral Home in Scottsbluff is assisting the family with arrangements. Ruben was born November 18, 1929, to Henry and Alice (Cain) Green at home in Bayard, Nebraska. Ruben went to school thru the eighth grade and then quit to help is father with the farm work. He was married to Josephine Rusch on September 21,1950. To this union two children were born Vickie Loray and Ruben Lynn. They were later divorced. Ruben farmed for many years and also sold seed corn for several different companies. He retired from both and started a career of over the road trucking as an owner operator. He retired from Grand Island Express after having a major accident. He then, not being able to sit and do nothing, became a Wal-Mart greeter in Grand Island. He is survived by his daughter, Vickie (Michael) Leever of Bayard; daughter-in-law, Susan Green of Scottsbluff; two sisters, Viola Steele of Bayard, and Louise Eads of Mitchell; five grandchildren, Jason (Laura) Leever of McCook, Jodi (Brian) Markheim of Little Elm, TX, Shaina Green Stricker of Scottsbluff, Jayme (Chris) Hallman of Bayard, and Stefanie (Daniel) Ramirez of Gering; 10 great-grandchildren, sister-in-law, Shirley Green of Torrington, WY; a friend Shirley Klinginsmith of St. Paul; and three nephews, and one niece. He was preceded in death by his parents; son, R. Lynn Green; his brother, Gerald Green; two infant brothers; and three brothers-in-law.
Published by The Star-Herald on Jul. 11, 2021.
To plant trees in memory, please visit the Sympathy Store.
MEMORIAL EVENTS
Jul
23
Service
10:30a.m.
Elmwood Cemetery
1/4 mile south Adams St. on Jackson St., St. Paul, NE
Funeral services provided by:
Bridgman Funeral Home - Scottsbluff
MAKE A DONATION
MEMORIES & CONDOLENCES
Sponsored by Bridgman Funeral Home - Scottsbluff.
4 Entries
Our deepest sympathy at the death of Ruben.
Willie and Lori Skala
Friend
July 22, 2021
For several years I worked with Ruben at North Walmart in Grand Island. We had great times visiting. I've missed seeing him, and Shirley, since we both retired. Condolences and love to Shirley and his family.
Mary Anne Hinchey
Work
July 21, 2021
Condolences to family and to Shirley Klinginsmith, who he was particularly closed to and loved. I known him as a kind person and would help others in need.
Terry Steffey
July 14, 2021
Thoughts and prays are with you.
Jerry and Kathy Hengen
Work
July 11, 2021
Showing 1 - 4 of 4 results