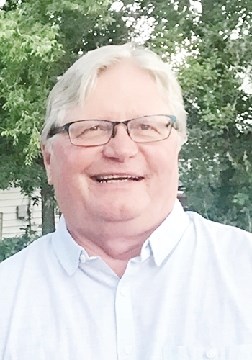 BORN
1952
DIED
2020
Thomas Jay Henson November 17, 2020 Thomas Jay Henson, 68 of Bayard was given his eternal peace on Tuesday, November 17, 2020 at Mary Lanning Hospital in Hastings. Celebration of life service will be at 10:30 AM Monday, November 23rd at Grace Chapel, 300 Valley View Drive, Scottsbluff. Pastor Bruce Peterson will officiate. To help protect others, facemasks are encouraged. The service will be livestreamed on Facebook at Grace Chapel SB. Burial will follow in the Bayard Cemetery. Visitation hours will be from 5-7 PM Sunday at Grace Chapel in Scottsbluff. All Faiths Funeral Home of Grand Island is entrusted with the arrangements. Memorials are suggested to the family. Tom was born on July 28, 1952 at Miller, SD the son of Dean and Florence (Bute) Henson. He was raised in the Miller area moving to Bayard, NE at the age of 16. He was a class of 1970 graduate from Bayard High School. He was united in marriage to Sheila Siegfried on March 27, 1982. Tom worked for area farmers until 1988, when he farmed for himself, retiring in 2010. He has worked for Simplot since 2010. Memberships include Grace Chapel and the Sons of the American Legion. His enjoyments included goose hunting, watching movies and sports and always had a joke or story to keep us laughing. Tom was also an amateur meteorologist; he could give you the ten-day forecast for just about the whole country. His greatest treasure was his wife, children, being "Granddad" and his love of Jesus. Those left to cherish his memory include his wife, Sheila; daughter, Sarah (James) Reece of Lincoln; son, Joel (Kaytlyn) Henson of Grand Island; grandchildren, Thomas and Myla Henson; sister, Patty (Rick) Valentine of Bayard; brothers, Dave (Kim) Henson of Redington, NE, Charles Henson of Bayard, Brad (Marie) Henson of Alliance and Ron (Kristin) Henson of Worland, WY; his aunts, Doris Henson and Kay Henson; his mother-in-law, Joan Siegfried of Scottsbluff; brother-in-law, Rick (Tammy) Siegfried of Evans, CO and numerous nieces, nephews, cousins and friends. Tom is preceded in death by his parents; brother, Jeffrey; nephew and niece, Tanner and Shelby Henson and father-in-law, Albert Siegfried. The family would like to thank the nurses, doctors and staff at Mary Lanning Hospital for their care and compassion for our beloved Tom.
To plant trees in memory, please visit our Sympathy Store.
Published by The Star-Herald on Nov. 20, 2020.
MEMORIAL EVENTS
Nov
22
Visitation
5:00p.m. - 7:00p.m.
Grace Chapel
300 Valley View Drive, Scottsbluff, Nebraska
Nov
23
Celebration of Life
10:30a.m.
Grace Chapel
300 Valley View Drive, Scottsbluff, Nebraska
Funeral services provided by:
All Faiths Funeral Home
GUEST BOOK
11 Entries
Sorry to hear of Toms passing. I got to know him hauling product to and from the Simplot liquid plant. Everyone will miss his big smile.
Sandy Munroe
November 24, 2020
My thoughts and prayers are with the whole Henson family. He will be missed so much.
Sandy Brockmoller
November 23, 2020
I'll always remember "Haney" on his Harley with a long ponytail. He was always mellow and a "good guy". He will be missed by many!!
Steve Amateis
November 23, 2020
Sorry to hear of Toms passing. We did a lot of beet fields together. A very good man to work with. We have been ill so can not be to service.
Russell and Beulah Freeburg
November 23, 2020
I graduated with Tom at Bayard High. He was a kind, caring guy that always made me laugh. My heartfelt sympathy to the family. I will never forget Tom´s laugh it was unique.
Teri (Brill) Lucas
November 23, 2020
Shocked to learn of Tom's "Haney's" passing Good Man! Life well lived! Thoughts & prayers go out to the families.
Jim Schaffer
November 22, 2020
So sorry for your loss Sheila. Are prayers are with you and your family. Sincerely Roger and Jeanine.
Roger Kildow
November 21, 2020
You went to soon old friend R.I.P.
Darrell Kraus
November 20, 2020
I will always remember Tom, as being a happy person who loved Jesus and all the people around him.
Marilyn LaPoint
November 20, 2020
To Shelia and Henson Family, You are in my thoughts and prayers, just thinking of Henney always brings Good memories. He brought lots of smiles to the times we worked and partied together. Good people sometimes are hard to find but they come to this earth and leave it also, like we all will do some day. Once again your in my thoughts and Prayers Schmidty
Terry Schmidt Schmidty
November 20, 2020
I am so sorry to hear of Tom's death, and at the same time rejoicing for his home-going. Tom used to work for dad back in his wilder days, and what a change Jesus brought into his life. I thank God for the man that He made Tom into. I didn't get to see Tom very often, but I thank God for Tom's life and the man he became. God bless you Shelia. You and the family are in our prayers.
Jonathan Seng
November 20, 2020