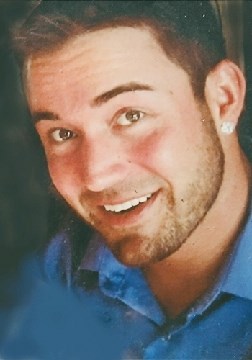 FUNERAL HOME
Reverence Funeral Parlor
2002 Char Ave
Scottsbluff, NE
Tyler W. Herman September 30, 2021 Tyler W. Herman, 34, of Scottsbluff, died unexpectedly Thursday, September 30, 2021. A celebration of life will be held at 11 a.m., Friday, October 8, 2021 at WestWay Christian Church in Scottsbluff with Pastor John Mulholland officiating. Cremation has taken place. Memorials may be made to the Tyler Herman Memorial Fund at First State Bank in Scottsbluff. Online condolences may be made by visiting www.reverencefuneralparlor.com. Tyler was born November 8, 1986 in Scottsbluff to Troy and Christina (Cushing) Herman. When he was a young boy, riding around with his Dad, he always requested him to play their favorite song, "Suspicious Minds" by Dwight Yoakam. He enjoyed hanging out and watching movies with his Mom, always his type of movies of course. Ty and his sister, Crystal, had a close relationship. If you knew Ty and his passion for lifting weights, you would know why she loved to call him her "little brother". Tyler graduated from Scottsbluff High School in 2004. Tyler married Chelsea (Tower) Rice and from that union he was blessed with their daughter, Alainah Herman, who he loved to spend precious time with. Tyler most recently worked at Celli's as a parts manager. His other work history included Union Pacific Railroad in Kansas City, MO where he was a foreman welder. He was physically active throughout his life. He could frequently be found at the gym working out and lifting weights. Tyler enjoyed skateboarding and became very good at it. He also played in softball tournaments and loved fishing. Survivors include his parents, Troy (Denise Cline) Herman and Christina (Tim Landrum) Herman; daughter, Alainah Herman; sister, Crystal (Duke) Lessert; grandma, Tina Herman; nieces and nephews; along with numerous extended family members and countless friends. Tyler was preceded in death by his maternal grandma, Mary Cushing; paternal grandpa, Telford Herman; and aunt, Debbie Godbolt.
Published by The Star-Herald on Oct. 7, 2021.
To plant trees in memory, please visit the Sympathy Store.
MEMORIAL EVENTS
Oct
8
Celebration of Life
11:00a.m.
WestWay Christian Church (Scottsbluff)
Funeral services provided by:
Reverence Funeral Parlor
MAKE A DONATION
MEMORIES & CONDOLENCES
Sponsored by Reverence Funeral Parlor.
6 Entries
I really enjoyed working with Tyler. May God bless you and your family in this time of sorrow.
Richard Larson (Fat Boys Tire)
Work
October 8, 2021
I Pray for all the family, JESUS Healing of your heart ,hurt and pain to help comfort you all in this time. God has him safe....So Deeply Sorry...Blessings to you my Old Friends..
Teresa LeMay
October 7, 2021
Prayers for the family I new Tyler as a young man So kind and loving He will be missed
Lora Sarah & Bodhi
Friend
October 6, 2021
Tyler had a way of building up confidence within you. His smile was contagious and he was a great friend who cared deeply about those close to him. He was not afraid to stand up for his loved ones. The world lost a great person. Rest easy brother and someday we will meet again.
Robert Dunn
Friend
October 6, 2021
I shared a lot of happy childhood memories with TY and considered him a good childhood friend. I remember spending countless hours hanging out at his moms apartment and sleep overs at his dads house in Mitchell. Ty to me was a great person and I hope he is happy in his after life. Rest easy bro
Dylan Wilhelm
Friend
October 4, 2021
So sorry for your loss! Tyler was my Best Friend and I will skate with him again in heaven someday.
Heath Widdowson
Friend
October 3, 2021
Showing 1 - 6 of 6 results