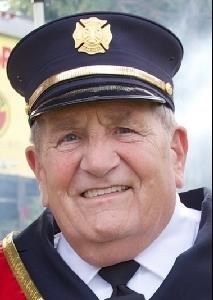 FUNERAL HOME
Shook-Farmer Funeral Home
45 Roseland Avenue
Roseland, NJ
Roseland fire chief with 50-year tenure, farm manager who collected milk bottles in his youth, family man & beloved neighbor, 84 George D. Batta, 84, lifelong Roseland resident, passed away on November 24, 2021. Loving husband, father and grandfather, George was born in Glen Ridge to Alexander and Helen (Harrison) Batta. He proudly served our country in the U.S. Army during peacetime and was honorably discharged in 1966. George served in the Roseland Fire Department for 50 years, as Driver, Pump Operator, Assistant Chief and later Fire Chief. He began working at Becker Farm in Roseland in 1948 at the age of 11, collecting milk bottles after school, then as a milkman driving a horse drawn milk wagon eventually becoming farm manager, until 1982. On the farm, he was also an engineer on the well-known Centerville and Southwestern Railroad, Miniature Railway. After Becker Farm, George spent 20 years as Maintenance Supervisor in the Warehouses of Ormonds and Calvin Klein in Secaucus. Before his retirement, George worked at Crestmont Country Club Greens Department. Known to many of the local Roseland residents, George was a fixture in town as his "fire truck" was often spotted parked outside of Marra's while he made his daily visit for coffee and chatting with his favorite fellows. George grew up on Harrison Ave then later moved to 339 Eagle Rock Ave, where he lived with his wife and raised his five children. In 2010, he moved to Nob Hill, and in recent months moved back to what was once 339 Eagle Rock Ave, at Arbor Terrace, so that he could spend his final days "at home" surrounded by the love of friends and family. He is survived by his loving wife Alyce Batta and children, George D. Jr. and Heather Batta, Leeanne and Ron Clarke, Michael J. and Carolyn Batta, Janet M. and Bill Pedrazzi, Robert B. and Cynthia Batta and 12 cherished grandchildren; Cassie, Dylan, Riley, Jack, Ryan, Kate, Lilly, Elle, Sophia, Benjamin, Maggie and Thomas, and caring siblings, Robert and the late Nancy Batta and Joan and Robert VanPelt along with many nieces, nephews, brothers and sisters-in-law. George is predeceased by his parents Alex and Helen Batta, in-laws Robert and Rita Burdette, and brother-in-law, William Brady, Jr. Visitation will be on Sunday, November 28, 2021 from 3-7 p.m. at Shook-Farmer Funeral Home, 45 Roseland Ave., Roseland. A Mass of Christian Burial will be celebrated on Monday, November 29, 2021, 10 am at Our Lady of the Blessed Sacrament Church, Roseland with interment to follow at Gate of Heaven Cemetery, E. Hanover. Memories and condolences may be shared at shookfarmer.com. The family respectfully requests masks be worn during the funeral home services and Mass. In lieu of flowers, donations in memory of George may be made to St. Jude Children's Research Hospital, stjude.org or The NJ State Firemen's Home in Boonton, njfh.org. Shook-Farmer Funeral Home 45 Roseland Ave. Roseland NJ 07068 (973) 226-1111
Published by The Star-Ledger from Nov. 26 to Nov. 27, 2021.
MEMORIAL EVENTS
Nov
28
Visitation
3:00p.m. - 7:00p.m.
Shook-Farmer Funeral Home
45 Roseland Avenue, Roseland, NJ
Nov
29
Mass of Christian Burial
10:00a.m.
Our Lady of the Blessed Sacrament Church
Roseland, NJ
Funeral services provided by:
Shook-Farmer Funeral Home
MAKE A DONATION
Please consider a donation as requested by the family.
MEMORIES & CONDOLENCES
Sponsored by The Family.
2 Entries
George was one of the the most caring and kindest people I ever met. A gentle soul I had the pleasure of working with for several years. We missed him when he retired and I can only imagine how much his family will miss him now.
Jim Shubert
Work
November 29, 2021
Dear George and family so sorry for the loss of your dad may he RIP
Theresa Ricciardi
November 26, 2021
Showing 1 - 2 of 2 results