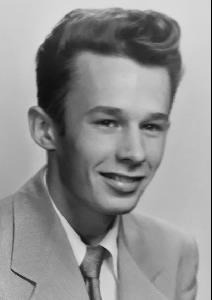 BORN
1934
DIED
2021
Had a loving and timeless marriage, fond memories of his youth in Newark, and a long career at Benjamin Moore On September 14, 2021, Joseph E. Lewczak (known as Joe to many and Hon to his beloved wife Shirley) passed away in Lebanon, PA at the age of 87, surrounded by his loving family. Joe was born in Newark, NJ in 1934, the son of the late John (Jan) and Emily (Pepek) Lewczak, owners of the Newark institution Emily's Bar and John's Tavern, located at 249 Ferry Street. Growing up, he enjoyed baseball, bowling and hanging at the neighborhood drug store. He attended Newark's East Side High, where he met the love of his life, Shirley M. (Fitzsimmons) Lewczak who, as legend has it, asked Joe out on their first date. The East Side High Yearbook noted that Joe's "talents are of the more silent type." While true, when he did speak, it was important to listen. Joe started work at Benjamin Moore & Co. in Newark shortly after school, working his way up to become a purchaser of raw materials and inventory, where he remained for over 45 years. He was extremely proud of his long service, and was sure to chastise anyone using inferior paints (there is notable truth to the rumor that Shirley once purchased stock in Sherwin-Williams Company and Joe never forgave her). After a whirlwind romance, Joe and Shirley were married in 1955. In an age where just staying married is an accomplishment, a union lasting over 66 years is one for the record books. Joe proudly served in the US Navy for over six years, first in the reserve and then in active duty. Joe and Shirley eventually found their way to the suburbs where, in East Brunswick, NJ, they raised two beautiful children – daughter Sharon Lewczak Marchu and son Joseph Lewczak. During this time, Joe enjoyed coaching little league (a great coach, though his son was a middling second baseman, which Joe took in stride), bowling (though this is likely the cause of the low back pain he had for the rest of his life), rooting for the Yankees, and wonderful summers in Seaside Heights – being an ardent fan of body surfing, Italian sausage at Midway, and pizza at Three Brothers. Once empty nesters, Joe and Shirley wandered the country for a bit, finally settling in Lebanon, PA. During retirement, Joe enjoyed golf, poker of odd varieties with his Tuesday afternoon poker club, watching HGTV and random action movies, imbibing in the "occasional" beer or rum and Diet Coke, and spending time with Shirley. He also became a prolific collector of large quantities of golf balls, toilet paper, paper towels, and old paid bills and appliance manuals (some from as far back as 1973 from the Two Guys in East Brunswick). Joe had an uncanny ability to create nicknames for his friends along with an inexplicable love of oddball songs from the 40s and 50s. One particular melodic fascination was Ferdinand the Bull, even though he could only remember part of one chorus. In addition to his wife, he is survived by: his daughter Sharon of Harrisburg PA, and his son Joseph along with his wife Anne DiGiovanni of Santa Monica, CA; as well as brother-in-law Kenneth Fitzsimmons and his wife Elaine; nieces and nephews William Fitzsimmons, Karen Adamonis, Kenneth, Lee, Dennis and Song Fitzsimmons, and Janice O'Shaughnessy; along with many friends, neighbors and admirers who enjoyed his quick wit and deep blue eyes. Joe was predeceased by his sister Patricia Robak. A private and personal service will be held for the immediate family. Memorial donations may be made in Joe's name to St. Jude Children's Research Hospital.
Published by The Star-Ledger from Sep. 24 to Sep. 26, 2021.
MEMORIAL EVENTS
To offer your sympathy during this difficult time, you can now have memorial trees planted in a National Forest in memory of your loved one.
MAKE A DONATION
Please consider a donation as requested by the family.
MEMORIES & CONDOLENCES
Sponsored by The Family.
2 Entries
Shirley, Sharon & Joe Jr. My deepest sympathies on Joe´s passing, a great guy whose company I always enjoyed.
Andy Chencharik
Family
September 26, 2021
I am sorry to hear of the loss of the love of your life
Dot
September 25, 2021
Showing 1 - 2 of 2 results