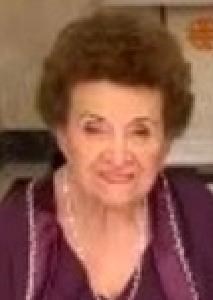 FUNERAL HOME
Biondi Funeral Home
540 Franklin Ave
Nutley, NJ
Mary Di Genova Mastrolia, 90, of Lebanon, NJ, entered into eternal life on September 15, 2021. Mary was born in Jersey City, NJ to Rosario and Margaret "Michelina" (Scalcione) Di Genova on July 28, 1931. Mary worked hard for her family, both in and out of her home. She was a typist for Western Electric and later a secretary for AT&T retiring in 1997. She was a devoted daughter, sister, wife, mother, grandmother, great-grandmother, aunt, and friend. Mary is remembered as the matriarch of her family. Her faith in God guided her, and she prayed fervently each day. Growing up in downtown Jersey City, she was involved with The Children of Mary and The CYO. Mary attended Ferris High School and won the high school ping pong championship. Later, Mary enrolled in the night owl program at Dickinson High School and graduated in June, 1949. Mary also attended Jersey City State College. Mary and her husband, Vito Mastrolia, were married on April 23, 1961 at Holy Rosary Church in Jersey City, and recently celebrated their 60th wedding anniversary. They grew their family, having three devoted daughters, in Belleville, NJ before moving to Lebanon, NJ in 1980. Mary enjoyed life with her family: cooking, crocheting, and encouraging her children and grandchildren to get a good education. Mary's kitchen was always open and she prepared countless feast-like meals with happiness. Mary always set the table for one extra person, just in case anyone stopped by. She accepted as much company as would come. As she aged, Mary continued to welcome her grandchildren and their friends for meals and would be sure to stock up on their favorite foods and drinks before they arrived. Mary's wish was for her family to continue the Italian traditions that she kept up her whole life. Her age never stopped her from living her life and keeping up with the current times. Mary prayed the rosary every morning, especially to the Blessed Mother and Padre Pio. She exercised daily, cooked, cleaned, drove, perused Facebook, called her daughters and grandchildren to check in, especially on rainy days, and got her hair done every Friday. Like a true Jersey Girl, Mary's favorite clothes were cheetah print. Mary loved God and her family more than her words could describe. Mary is predeceased by her parents Rosario and Margaret "Michelina Di Genova, adored Goddaughter Annmarie Di Genova, and many dear relatives. Mary is survived by her husband Vito Mastrolia, her brother Michael Di Genova and wife JoAnn of North Arlington, and her daughters, Carmela and husband Russell Surace of Hillsborough, Margaret Anne Cozzarelli of Nutley, and Maria and husband Arthur Muth of Hillsborough. Additionally, she is survived by her beloved grandchildren, Nicole (Muth) and husband Jonathan Bryan, John Paul Cozzarelli, Alexandra Muth, Russell Surace, Nicholas Cozzarelli, Michael Surace, Marc Cozzarelli, Jessica Muth, Angela Surace, and her newly-born great-granddaughter Delia Margaret Bryan, as well as many loved relatives and friends. Mary was a saint and will forever be cherished in their hearts. The Mastrolia family will receive guests on Sunday, September 19th from 2 to 6 p.m. and on Monday, September 20th at 9:15 AM at the Biondi Funeral Home, 540 Franklin Avenue, Nutley. A Funeral Mass will be celebrated on Monday, September 20th, at 10:30 a.m. at Holy Family Church, 28 Brookline Avenue, Nutley, followed by interment at Holy Cross Cemetery, North Arlington. In honor of Mary, donations can be made to The Leukemia And Lymphoma Society, https://givenow.ills.org, or to her church, Holy Rosary Church 344 – 6th Street, Jersey City, NJ 07302.
Published by The Star-Ledger from Sep. 17 to Sep. 18, 2021.
MEMORIAL EVENTS
Sep
19
Visitation
2:00p.m. - 6:00p.m.
Biondi Funeral Home
540 Franklin Avenue, Nutley, NJ
Sep
20
Funeral Mass
10:30a.m.
Holy Family Church
28 Brookline Avenue, Nutley, NJ
Sep
20
Interment
12:00p.m.
Holy Cross Cemetery & Mausoleum
340 Ridge Road, North Arlington, NJ
Funeral services provided by:
Biondi Funeral Home
MAKE A DONATION
Please consider a donation as requested by the family.
MEMORIES & CONDOLENCES
Sponsored by The Family.
0 Entries
Be the first to post a memory or condolences.