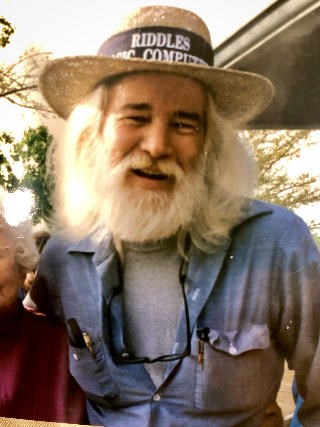 Edgar Eugene “Gene” Riddle passed from this life July 19, 2021, at his home in Little Elm, Texas. He was born August 20, 1943, in Talihina, Oklahoma, to D. A. Riddle and Frances Mardell Messick Riddle. He was a member of the Choctaw nation.

Gene graduated from Bennington High School and served his country in the U.S. Air Force Reserve. As a young adult, he worked on a Ford Motor Company assembly line where he had time to question his priorities and begin his search for truth, understanding, and the best way to live life. Education, meditation and contemplation became his life-long pursuit, and he was compelled to share his philosophy with his friends, family and any others who were interested.

He was the first in his family to pursue higher education earning a degree in marketing from the University of North Texas. During his time at the university, he pursued a variety of work including mobile home sales and iron work. After graduation, he designed and built his first home, opened a successful heating and air conditioning business, and later a computer repair shop. He was passionate about seeking knowledge, studying music, and sharing those passions with his family.

Family and friends celebrated his life on July 31, 2021 at the Old Church Pavilion in Bennington, Oklahoma.
Published by Star Local Media from Aug. 1 to Aug. 7, 2021.
To plant trees in memory, please visit the Sympathy Store.
MEMORIAL EVENTS
To offer your sympathy during this difficult time, you can now have memorial trees planted in a National Forest in memory of your loved one.
MAKE A DONATION
MEMORIES & CONDOLENCES
0 Entries
Be the first to post a memory or condolences.