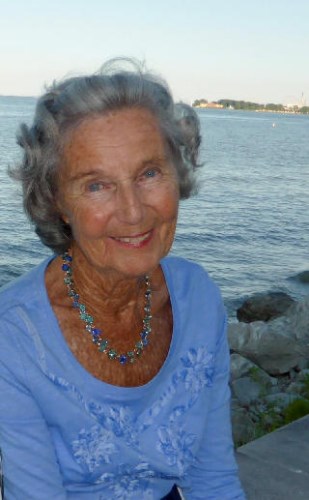 Hope Noxon Whyman of McKinney, Texas and formerly from Chagrin Falls, Ohio passed away on May 18, 2021, at the age of 87. She was born on August 3, 1933 to Elwood Walters Noxon and Marie Elizabeth (Rohling) Noxon, of Bloomfield, New Jersey. She married Walden “Wally” Whyman on January 28, 1956.

Hope spent her early years in the New Jersey area before attending Wooster College in Ohio. She returned from college to her family home in Orange, New Jersey. While living there she worked in New York City as a clothes buyer for a consortium that supplied product to the major department stores in NYC, including Bloomingdales and Lord and Taylor.

Hope met Wally through an older gentleman she befriended on her daily train rides to the city, who knew Wally through his work. After facilitating their introduction, this mutual friend urged them to “invite him to the wedding”. Some things in life are destined from the start.

The newly married couple left New York City shortly after their wedding in 1956 for East Aurora (a suburb of Buffalo), New York where their first child, Peter, and their second child, Wendy, were both born. After Wally received a promotion, the family moved back to the NYC area and made a home in Lloyd Neck, Long Island, where their third child, Susan, was born. In 1966 Wally's new position took the family overseas to Brussels, Belgium and later to Rio de Janeiro, Brazil. Although it was challenging living abroad with 3 young children, Hope grasped life with both hands (as she always did) and persevered to learn new languages, customs, and routines. Hope loved overseas travel and immersing herself in each of their destinations.

After returning from living abroad, Hope and her family settled in Chagrin Falls, Ohio (a suburb of Cleveland) and lived there for almost 30 years before retiring to South Carolina and then to McKinney, Texas.

Hope was creative in so many ways. Always enamored with fashion, her father challenged her as a teenager to learn how to sew. He would supply the fabric if she would invest the effort to make clothing. She became an expert seamstress and she was “crafty” in her home. She also thoroughly enjoyed entertaining and was a wonderful gourmet chef with genuine hospitality to match.

She was an avid racquet sport player, tennis in the summer and paddle tennis in the winter. She loved to garden and took special pride in her vegetable garden. Sailing was a consistent family activity, domestically and internationally with bare boat charters in Greece, the Grenadines, British and US Virgin Islands, the Atlantic Coast, the Great Lakes and on the last family boat, docked in Marblehead on Lake Erie. Hope was Wally's treasured 1st mate aboard their sailboats.

Hope was a spiritual person and was a frequent and faithful participant in various bible studies through the years. She loved sacred music, especially the “old hymns”, and these were of comfort to her throughout her life and especially in her last years.

She cherished each of her 10 grandchildren and now 8 great grandchildren. She and Wally were extremely grateful and thankful for all of their blessings of family.

Hope was undeterred by obstacles and taught those around her to rise and meet challenges head on. She was strong and courageous and even at the end when faced with great suffering, she never complained. She marched to the beat of her own drummer and her strength of will spilled over to those around her. She was a devoted wife, mother, grandmother, and great-grandmother and she will be missed. Her family takes comfort in their belief that just four months after Wally's passing, they are once again together in spirit. Hope and Wally would have celebrated their 65th anniversary this past January.

She was preceded in death by her husband, Walden “Wally” Whyman; parents, Elwood and Marie Noxon, and her sister, Ann Van Ness.

There will be a private family burial service on the shores of Lake Erie later this summer.

The family requests any donations be made to the Alzheimer's Association at https://alz.org. To convey condolences or to sign an online registry, please visit TJMfuneral.com
To plant trees in memory, please visit our Sympathy Store.
Published by Star Local Media from Jun. 6 to Jun. 12, 2021.
MEMORIAL EVENTS
No memorial events are currently scheduled.
To offer your sympathy during this difficult time, you can now have memorial trees planted in a National Forest in memory of your loved one.
MAKE A DONATION
Please consider a donation as requested by the family.
MEMORIES & CONDOLENCES
0 Entries
Be the first to post a memory or condolences.