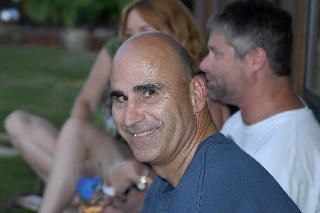 James Patrick O'Toole, better known to most as Jim, died peacefully January 31, 2019 at the age of 65. He was born in Pittsburgh, PA to his Irish father, Michael James and his Italian mother, Elizabeth Emanuela, the second of four boys. Jim spent much of his early adult life in Florida, where his son Christopher was born, and his passion for skydiving began. Later moving to South Carolina to follow that passion, he met Judith, whom he brought to Texas in 2000 and married the next day. They would have been married 19 years this spring.

Jim spent a few years working for the Container Store and Capital One, but it wasn't until he “retired” that he found his third passion. For the past five years, Jim was an active member of the Citizens on Patrol In Allen, and volunteered to manage the front desk of the Allen Police Department on Friday afternoons. He was also a volunteer at the Allen Community Outreach (ACO) Food Pantry, and in 2016 was awarded the Gold President's Volunteer Service Award for serving so many hours. His last two days before entering the hospital were spent working the front desk at the Police Department, and power washing the freezers at the food pantry. In his final act of service, Jim donated his body for medical research to the Willed Body Program at the UT Southwestern Medical Center.

Jim was an accomplished skydiver with over 5000 jumps, and numerous state, national, and world records. In lieu of a traditional memorial service, we will be celebrating Jim's life by having his skydiving friends spread his ashes in the air on an ash dive this

summer. Instead of flowers, we ask that you donate to the ACO Food Pantry or the Texas Food Bank.
Published by Star Local Media from Feb. 14 to Feb. 20, 2019.
To plant trees in memory, please visit the Sympathy Store.
MEMORIAL EVENTS
To offer your sympathy during this difficult time, you can now have memorial trees planted in a National Forest in memory of your loved one.
Funeral services provided by:
Jobe Funeral Home
MAKE A DONATION
MEMORIES & CONDOLENCES
Sponsored by Jobe Funeral Home.
3 Entries
I was sad to find out of Jim's passing. Jim was always a gentlemen. We were good friends and our birthdays were just days apart. I can go on and on with the good memories Jim and I share.
My condolence to all of his family.
Rest in peace my special friend.
Patty Ciufo
February 26, 2019
I will remember Jim as a kind, considerate gentleman. My favorite memory was when he walked me to my car in the parking lot at St. Jude's one evening, after I had gotten lost trying to find it! Such a sweetheart! He'll be missed by so many.
Marcia Cullen
February 19, 2019
My condolences go out to the family and friends during this difficult time. May you find a measure of of comfort found at John 6:40 which says that soon we will all see our loved ones again
A B
February 17, 2019
Showing 1 - 3 of 3 results