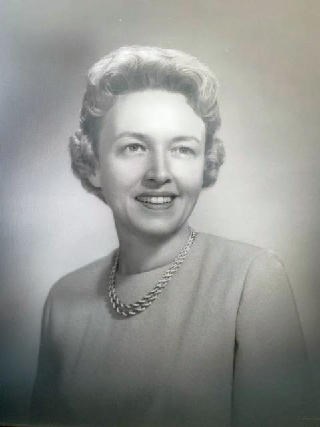 Martha Downing Justice, 95, died peacefully on Sunday, September 19, 2021. Martha was born in El Dorado, Kansas on September 4, 1926 to Harry Downing and Olive (Cribbs) Downing. She attended the University of Colorado, Boulder, where she studied chemistry. Martha was a devoted, and much loved, mother, wife, grandmother and great-grandmother.

Martha grew up in Wichita, Kansas and moved to Boulder Colorado with her parents and sister while attending the University of Colorado. While still a college student, she met Glenn W. Justice and immediately stole his heart. Like so many of their generation, they were sweethearts while Glenn served in the Navy during World War II. They were married in 1946 and they remained devoted to each other for nearly 70 years.

Martha and Glenn spent their entire married life in the Dallas area. They eventually purchased the farm in Parker, and from then on they split their time between the farm and their home in Dallas. Martha was a prominent citizen of the City of Parker and hosted the first Annual Parker Community Picnic; proceeds from this annual event were used to support the Parker Volunteer Fire Department. Martha continued in the role of hostess of the annual picnic for many years.

Martha loved the Rocky Mountains and passed this love onto her husband and children. The family eventually purchased a mountain home in Estes Park, Colorado, and made Estes Park their second home.

Sadly, Martha was predeceased by Glenn and their beloved daughter Elizabeth “Betsy” Justice, but they are reunited now. Martha was also predeceased by both her parents and her sister Elizabeth “Betty” Mills. Martha is survived by her two sons, Harry Justice and wife Sherry; and Glenn W. “Chip” Justice, Jr. and wife Linda, as well as 5 grandchildren and 8 great-grandchildren.

The family wishes to extend its sincere appreciation to Dr. James Chanez and his nurses and staff for the loving care they provided to their Mother. The family asks that anyone wishing to honor Martha do so by making a memorial donation to the Texas Health Resources Foundation, P.O. Box 200038, Arlington, Texas, 76006-9946, benefitting the Chaplain David Erb Pastoral Care Fund or to a charity of your choice.

On September 11, 2021, the family gathered with Martha to celebrate her 95th birthday. It was a great day of merriment and joy and Martha was the life of the party. The family wishes to remember Martha as the happy, fun-loving person she was and will let her last birthday party serve as her memorial.
Published by Star Local Media from Sep. 24 to Sep. 30, 2021.
To plant trees in memory, please visit the Sympathy Store.
MEMORIAL EVENTS
To offer your sympathy during this difficult time, you can now have memorial trees planted in a National Forest in memory of your loved one.
MAKE A DONATION
Please consider a donation as requested by the family.
MEMORIES & CONDOLENCES
2 Entries
It was an honor and my pleasure to serve as the mailman in Parker where the Justice family resides. Mrs. Justice used to drive around looking for me when I was running late with the mail. It was always a joy and a great pleasure to talk to and visit with Mrs. Justice over the last 15 years. She will be greatly missed. My condolences to her family.
Marcus Riley
October 17, 2021
Chip and Harry - sorry to hear about your mom. I hope you both are doing well.
George Koran
Other
September 27, 2021
Showing 1 - 2 of 2 results