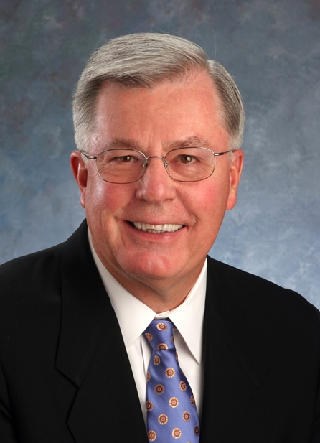 Robert was born December 29, 1949 in Henrietta, TX to Robert Wendell Rothe and Marilyn Lucille Cohea Rothe. He graduated with honors from Brownwood High School as a three-year Eagle Scout and All State Football player in 1968. He attended Southern Methodist University on a football scholarship as a member of the Alpha Tau Omega Fraternity in 1972 and graduated with a degree in Political Science.

Robert married Merry Ann Stetler of Fayetteville, New York on October 7, 1972 in the SMU Perkins Chapel in Dallas, TX. He served his country in the United States Air Force, honorably discharged as Captain after serving six and a half years as a C-130 pilot. Since 1979, he was actively involved in the financial services industry and was a Certified Financial Planner owning a Dallas based financial planning firm for thirty years.

Robert was highly honored through his endless service to the community. He served as president of Allen Rotary Club and recipient of the Paul Harris Fellow. He was Chairman of the Board for Allen Chamber of Commerce and received the Pacesetter Award as well as the Spirit of Allen Award. He was chairman of the board of First United Methodist Church of Allen and awarded Trustee of the Year for the United Methodist Higher Education Foundation. He served as board president of Allen Community Outreach. He was the founding president of the Arts of Collin County Foundation and board member of the Allen Philharmonic Symphony Orchestra. Robert was awarded the Foundation Star and served as founding treasurer of the Allen Schools Foundation. He was also a distinguished alumnus of the Leadership Allen Alumni Association.

In Kerrville, Robert served on the church council of the First United Methodist Church and was a frequent speaker to many church groups on topics such as stewardship and managing money from a Biblical perspective. Throughout his life he was a dedicated teacher of Disciple Bible Study.

Robert is preceded in death by his parents, Robert Wendell Rothe and Marilyn Lucille Cohea Rothe.

In remembrance of Robert's life, the family asks that all expressions of sympathy be made through the United Methodist Higher Education Foundation to the Robert Siegmund Rothe Scholarship Endowment Fund at https://www.umhef.org/give/

The family invites you to leave a message or memory at www.kerrvillefuneralhometx.com by selecting Obituaries. Select “Sign Guestbook” at the top of the individual memorial.

Arrangements are under the direction and personal care of the professionals at Kerrville Funeral Home. (830) 895-5111
Published by Star Local Media from Aug. 6 to Aug. 12, 2021.
To plant trees in memory, please visit the Sympathy Store.
MEMORIAL EVENTS
Aug
4
Funeral service
10:00a.m.
First United Methodist Church
321 Thompson Drive, Kerrville, TX
Funeral services provided by:
Kerrville Funeral Home
MAKE A DONATION
MEMORIES & CONDOLENCES
Sponsored by Kerrville Funeral Home.
3 Entries
Joe and I send our heartfelt condolences to Merry Ann and the family. We were blessed to know such a great man.
Judy Farmer
August 4, 2021
So very sorry and shocked to hear of Bob's passing. He was a great man and even better friend. His leadership as Chairman of the Allen Fairview Chamber in 2003 and his desire to provide added benefits for staff will also be remembered and appreciated. He was a great friend to me. We laugh each time we plant flowers at our house, remembering Bob's comments (sarcastically) about season color. Our heartfelt condolences to Bob's wife, Merry Ann, and his entire family. Thank you for sharing him with our Chamber and community - he made a difference!
Sharon & Paul Mayer
August 2, 2021
I´m so sorry to hear about Bob. He was a classmate in 1968 in Brownwood. Have not seen him since and he was a good man. My prayers for his family
Karen MCBride Fair
School
July 31, 2021
Showing 1 - 3 of 3 results