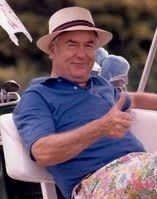 Claude was born in St.Pauls, NC and raised in Wilmington, NC where he graduated from New Hanover High School. Always the jokester, he loved to tell people he was "all county" in four sports- it was the only high school in the county.

After losing his earthly father at just six years old, Claude developed a deep faith in his Heavenly Father and a strong work ethic which became the foundation of his life. His devotion to family was instilled in him by his mother and their church.

Upon completing high school, Claude proudly served his country in the United States Air Corps and then began his lifelong career in the furniture industry. He never met a stranger and had a genuine love for people which made him excellent at his job.

In October 1952, Claude married Bobbie and they settled in Charlotte, where they raised five children. His children have always been close, not only in age but in their love and loyalty for one another because of the love and loyalty modeled by Bobbie and Claude. They had a childhood full of adventure— from their "hysterical historical" tours piled into the station wagon driving all over the country to summers spent at Wrightsville Beach. Claude made sure they had every opportunity that he never had and that they lived life to the fullest.

Claude spent the week on the road as a salesman, but always made the most of his weekends at home with family and friends. He loved twirling Bobbie on the dance floor, playing tennis and golf, serving at church, and working in his beautiful yard.

Bobbie and Claude attended Myers Park United Methodist Church for over 50 years, where they were a part of the Wesley Sunday School Class. He was most passionate about sharing the Word of God through Gideons International. He was always asking others "where do you go to church?", sharing newspaper clippings and magazine articles, and making sure to leave a Bible everywhere he went.

Bobbie and Claude enjoyed their summers spent at Grandfather Golf and Country Club. He played doubles tennis with the same group up into his early nineties which included his brother Jim.

Always the adventurer, Claude visited all seven continents, some of his most cherished memories are traveling with his wife Bobbie. Being a lover of sports, he was fortunate to attend every major sporting event, which included 24 years of attending the Masters Golf tournament with the same four couples.

With much of his family remaining in Charlotte, Claude was always there for his grandchildren like he was for his children. Whether it was a football or lacrosse game, dance recital or gymnastics meet. He never missed an opportunity to cheer them on. "Dan Dad" taught his grandchildren that there is always something to learn from everyone, to leave things better than you found it, to "say your prayers and brush your teeth" but most of all, he taught them to love the Lord.

In the last decade of his life, Claude's mind slowly faded but his ability to recall scripture and hymns never wavered. Up until his last days he was leading his family in prayer and telling them, "let me know if there is anything I can do for you". He was a living testament that the Word of the Lord lasts forever. For more than 100 years, he upheld the principles of faith and hard work that he developed in his early childhood.

He is preceded in death by his brother James Leonidas Davis, his sisters Lillian Davis Snow and Margaret Davis Bryant and his son-in-law Nicks Williams.

The family would like to thank Dr. Robert Bowen for his kindness, thoughtfulness and compassionate care. And also, Sandra Hayes, who truly cared for Claude as a service unto the Lord during the last few years of his life. She was the hands and feet of Jesus showing an abundance of love, grace and mercy for Claude for which we are eternally grateful. And lastly, his daughter Rebecca and her husband George for opening their home to Bobbie and Claude eight years ago. It has been a blessing for them to live with family during this last season, surrounded by children, grandchildren and great-grandchildren, constantly coming and going, and bringing such joy to their lives. Thank you for giving them this opportunity and for the love you have shown Claude through a constant outpouring of love and service.

A private family service to celebrate his life will be held at 1:00 PM, May 14, 2021 at Myers Park United Methodist Church. . Please join the family via livestream at https://livestream.com/mpumc/funeral


To plant trees in memory, please visit our Sympathy Store.
Published by Wilmington Star-News from May 8 to May 11, 2021.
MEMORIAL EVENTS
May
14
Service
1:00p.m.
Myers Park United Methodist Church
, NC
Funeral services provided by:
Kenneth W. Poe Funeral & Cremation Service
MAKE A DONATION
MEMORIES & CONDOLENCES
Sponsored by Kenneth W. Poe Funeral & Cremation Service Kenneth W. Poe Funeral & Cremation Service.
3 Entries
We were so sorry to hear about Claude's death. He was a special friend for many years in the Wesley Sunday School Class and Myers Park UMC. When he served as Chair of the Commission on Evangelism there, Melvin was his staff liaison, and what a joy it was to work with him. He wanted to convert the whole world, and worked hard at it! His, was a life well lived.."well done, thou good and faithful servant".
Melvin and Anita McIntosh
Friend
May 10, 2021
Mrs. Davis, Claude, Elizabeth, Katherine, Rebecca, John and all, I am so sorry to read about your loss! Mr. Davis was such a fine man with a gentle spirit, a real “old soul” and man of God. 101 years! What a blessing his especially long life was for you all! As you go through the coming days, my prayers are with each of you. Love to all! Betty Lou
Betty Lou Haddock Brundick
Friend
May 9, 2021
Sending prayers to the Davis family Ginger Northcott
Ginger Northcott
Friend
May 8, 2021
Showing 1 - 3 of 3 results