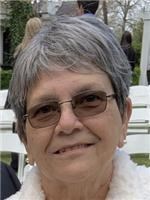 FUNERAL HOME
Kennedy Funeral Homes - Hooks Chapel
223 South Broad Street
Metter, GA
Delilah Lanier Collins of Metter, and wife of Jesse Ray Collins, peacefully slipped away from us and into the welcoming hands of her God, surrounded by her family, on Wednesday, June 23, 2021.
Born in Metter, she was a daughter of Earl Lanier and Dorothy Findley Lanier.
Delilah was a 1970 graduate of Metter High School, where she excelled in sports. She was a star player of the Metter Bulldogs basketball team and in one particular game, scored 58 points and there were several other games in which she scored over 50 points.
Delilah married Jesse Ray Collins in 1972 and it was during that time she worked with Dr. Leon Curry at Medical
After the birth of her first child, Delilah became a homemaker.
She was an avid golfer and was a member of the Willow Lake Golf Course for many years.
Delilah was a fan of the Atlanta Braves, Georgia Bulldogs and of her family, especially the grandchildren. She enjoyed spending time with her seven grandchildren.
Delilah was a member of the Metter Primitive Baptist Church and was a Sunday school teacher for 35 years. She was also an active member of The Circle of Love of the Metter Primitive Baptist Church.
Surviving are her husband of 49 years, Jesse Ray Collins of Metter; her daughter and son-in-law, Whitney and Patrick Kessler of Metter; two sons and daughters-in-law, Corey and Seleta Collins of Augusta and Chad and Brianna Collins of Metter; her brother and sister-in-law, Elliott and Lana Lanier of Metter; her grandchildren, Laura Kate Kessler, Brynn Kessler, Abri Collins, Chloe Collins, Stella Collins, Aria Collins and Lilah Rae Collins; and several nieces and nephews.
Visitation will be held Friday, June 25, 2021, from 5 until 7 o'clock in the evening at Metter Primitive Baptist Church.
The funeral service will be held Saturday, June 26, 2021, at 11 o'clock in the morning at Metter Primitive Baptist Church. Interment will be in Lake Cemetery.
Remembrances may be made to Metter Primitive Baptist Church, P.O. Box 672, Metter, Georgia 30439; or Ogeechee Area Hospice, P.O. Box 531, Statesboro, GA 30459.
Guestbook: www.kennedyfuneralhomechapels.com.
Kennedy Funeral Homes, Hooks Chapel, of Metter, is in charge of the arrangements.