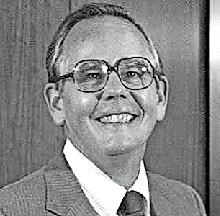 BORN
1933
DIED
2020
MORE, III, George Hall George Hall More III, passed away peacefully on September 8, 2020. Born January 3, 1933 in San Antonio, he was the son of George Hall More Jr. and Vida Black More. He grew up on the edge of Houston exploring the woods, beekeeping, reading in trees and proudly throwing a newspaper route to save for a motorcycle he bought at the age of fourteen. He graduated from Lamar High School and Rice Institute in 1956 with a BS in Mechanical Engineering. In 1959, excited by the burgeoning high-tech industry, George contributed to the formation of a start-up company, Houston Instrument. He became President in 1968, one year after a merger with Bausch & Lomb. The company, which engaged in world-wide sales of laboratory recorders and computer graphic plotters, moved to Austin in 1974. Under his leadership, Houston Instrument grew to over 600 employees with operations in both the US and Europe. In 1984, George left Houston Instrument to become an entrepreneur starting many businesses. George was a Director of RepublicBank Austin as well as multiple privately owned companies in Texas and Louisiana. Motivated by a love for his new home city, he became active in many Austin civic organizations including Chairman of the Science Academy, Secretary/Treasurer of the Brackenridge Foundation, Executive Vice President of The Austin Symphony, Chairman of the Austin Community Foundation, Director of Leadership Austin, Adopt-A-School, Rotary Club, and United Way. He was also Chairman of the Better Business Bureau, President of Junior Achievement, Chairman of the Symphony Square Committee, Vice President of the Austin Chamber of Commerce, Advisor to the Junior League and a Director of St. Andrew's School. He was a dedicated member of the Knights of the Symphony and was honored to be chosen King Brio XXXVII in 2002. He also belonged to The Admirals Club, Bachelors Club of Austin, EIEIO, Austin Country Club and The Headliners Club. George married the love of his life, Marion Bostick in 1963. As a young man, he was an avid sailor, owning many boats of varying sizes. He served as Commodore of the Seabrook Sailing Club and was a consistent winner of gulf regattas for many years. George cultivated many passions in his life including woodworking, restoring old cars, golfing, gardening, and margarita-making. He claimed to be the world's worst fisherman in Rockport, Texas, where he spent many happy times overlooking Aransas Bay. George is preceded in death by his parents and his sister, Edith Skene Johnson. He is survived by his wife of 57 years; his children George Hall More IV "Jorge" and Francie More Mancillas (Steven); grandchildren Steven Joseph Mancillas Jr., Matthew Hall Mancillas, Chase McKellar More, Micajah Mills More; in-laws Francis and Helen Bostick, and nieces and nephews Tad Bostick, Julie Smith, Tim Bostick, Hal Johnson, and Karen Williamson. Per his request, there will not be a service, but a party to celebrate his life when the pandemic allows. In the meantime, please make a margarita or pour a glass of wine in his honor. The family is grateful to the staff of The Village at the Triangle Memory Care Unit as well as Magnolia Hospice for their outstanding support and care. If you would like to honor George, please consider donating to The Austin Community Foundation, The Austin Symphony Orchestra or the charity of your choice. Remembrances may be shared at www.wcfish.com.
To plant trees in memory, please visit our Sympathy Store.
Published by Austin American-Statesman on Sep. 13, 2020.
MEMORIAL EVENTS
No memorial events are currently scheduled.
To offer your sympathy during this difficult time, you can now have memorial trees planted in a National Forest in memory of your loved one.
MAKE A DONATION
Please consider a donation as requested by the family.
MEMORIES & CONDOLENCES
0 Entries
Be the first to post a memory or condolences.