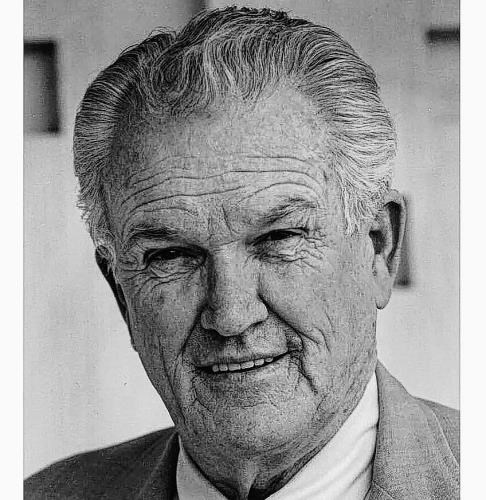 Joe was born in Houston, TX, June 8, 1931, to James Clarence and Mary Ann (Allen) Gunn. He was the last of their eight children and the last to be called to his heavenly home.

Joe was raised in the small town of Leona, TX and later moved to Houston, where he attended high school and met his sweetheart, Dorothy. He began his work career in the summer of 1948 at Southwestern Bell. He returned to school but resumed working for the telephone company in February 1949 to help support his family. It was at this time that Joe first joined the Communication Workers of America (CWA) Local 6222. He remained a proud union member throughout his life.

Joe enlisted in the United States Marine Corps in February 1951 and married Dorothy while on leave following basic training before being shipped out to Korea for nine months active duty. Upon completing his military service, he returned to work at the central office of Southwestern Bell, where he worked as a telephone repairman in long-distance. He later acquired a second-class radio license and also worked in television and microwave.

Joe and Dorothy began their family in 1955 with the birth of their son Jay. Daughter Belinda arrived a few years later. In 1961, Joe's rise in the labor movement began when he was elected CWA Steward. Shortly afterward, he became Chief Steward, 2nd Vice President and, by June 1962, President of the union. In the decade he served in that position, the fine members of CWA became his large extended family.

Joe's family at home continued to grow with the adoption of two boys, David and Donald. In 1969 the family moved to Madisonville, TX. With the aid and assistance of many CWA members, he and Dorothy began "My Youth Ranch," where they welcomed a number of children of varying ages who needed a stable environment.

In 1973, Joe accepted an appointment by Gov. Dolph Briscoe as Commissioner representing labor at the Texas Employment Commission (TEC), the predecessor to the Texas Workforce Commission. He was the first union representative to hold that office. One of the many policies he was able to achieve to help workers who had lost their jobs through no fault of their own was known by friends and foes alike as "The Gunn Rule." That rule delivered crucial benefits to additional out-of-work Texans for decades.

In 1979, Joe was elected to the position of Secretary-Treasurer of the Texas AFL-CIO, where he served for a decade. He was elected President of the Texas AFL-CIO in 1989, where he served until his retirement in 2003. Throughout his career in the labor movement, Joe fought valiantly for working people's rights, many times in creative and sometimes outlandish ways. He hauled a mule around on a truck, dressed up as Sherlock Holmes and commissioned and unveiled an oil painting to make points on behalf of working people, but most often, he met the goals of workers through a personal, intense commitment to his fellow man. Every day Joe lived his favorite quote, "Dignity for Workers: A Right, Not a Privilege."

Not everyone always agreed with Joe, but he was always respected as a man who was honorable, generous, dedicated, direct and loving. People knew where he stood and there was never a more apt slogan than the one he adopted for one of his election campaigns: "A straight shooter."

Joe lived a life of love and generosity not only with his family, his work family, and his church family but with many organizations over the years such as the PTA, the United Way, and Boy Scouts of America. He was as devoted to working people in all walks of life as he was to those near and dear to him.

Joe was as down to earth as any man. Whether meeting with top State or National leaders or with his grandkids, he was the same man of integrity who never put on airs. He leaves behind a legacy of love, hard work and dedication that is immeasurable and was reciprocated. His family, friends, union Brothers and Sisters and even casual acquaintances will miss his undying love, charming wit, sense of humor and guiding wisdom but that warm legacy remains with all those he leaves behind.

Joe was preceded in death by his parents; wife, Dorothy Taylor Gunn; son, Don Gunn; and "like a son" Jim Kronwinkler. He is survived by his sons, Jay Gunn and wife Corie of Buda, TX and David Gunn of Kyle, TX; "like a son," Michael (Bones) Kronwinkler of Manvel, TX; daughter, Belinda (Happy) Rogers of Creedmoor, TX; grandchildren, Chelsea Gunn Welch and husband Gerald, Joe Gunn, Mackenzie Gunn, Amber Gunn, Mike Kronwinkler and Mitchell Kronwinkler; and great grandchildren, Cannon and Leah Welch. He is survived by many other family members and life-long friends who will miss him dearly.

A Memorial Service will be held 11 a.m. Friday, April 8, 2016 at the Buda United Methodist Church, 302 Elm Street, Buda, TX 78610. A private interment of his ashes will occur at the Texas State Cemetery at a later date. In lieu of flowers, donations may be made to the Texas AFL-CIO Scholarship Fund, Texas AFL-CIO, P.O. Box 12727, Austin, TX 78711.
Published by Austin American-Statesman from Apr. 3 to Apr. 4, 2016.
To plant trees in memory, please visit our Sympathy Store.
MEMORIAL EVENTS
Apr
8
Memorial service
11:00a.m.
Buda United Methodist Church
302 Elm Street, Buda, TX
MAKE A DONATION
MEMORIES & CONDOLENCES
7 Entries
I knew Joe during the 1980's when I represented Southwestern Bell at the State Capitol. He was a good man and a man of integrity. I respected his work and his dedication to his CWA members. Even though we were not always on the same side of an issue, he treated me with respect and we were able to work out our differences. Truly a fine gentleman.

Ralph Weston
Austin, Texas
Ralph Weston
August 9, 2019
RIP Joe.
Bessie Mansfield
April 8, 2016
Condolences to the Gunn family. No two greater people have I ever known than Joe and Dorothy Gunn. Rest in peace Joe.
Robin & Chuck Noel
April 8, 2016
My deepest sympathy to Joe's family. What a wonderful man and friend. With his help I was able to continue work with the State in order to retire. I will always be grateful for his kindness. May all the wonderful memories you have live forever in your hearts.
Mary Kirkwood
April 5, 2016
I was sorry to read of Joe's passing. I knew him both from TEC and the labor movement . He was a fighter for justice , decency , and fairness. Que vaya con Dios! His family must be justly proud of him and his life. My condolences to them.
John Kruse
April 4, 2016
I did not know Mr. Gunn personally but I worked for TEC for 30 years and one the meetings he was trying to get something done and he made the statement the majority wins "But me and the Lord makes a majority". Mr. Gunn's family has my sympathy for their lost.

Nellie Lawson Haller
TEC Retiree
April 4, 2016
I am honored having the opportunity to know Joe. He was the type person that you knew... you knew him when you first shook his hands.He was truly one of a kind and never forgot his roots no matter what level of power he rose to in the hierarchy of Labor...Joe Gunn never wavered from who he was and stood strong on principal. I was honored that Joe asked me to second his nomination in 1989 as he was being nominated for President of the Texas AFL-CIO and that is a memory I will always cherish.
Joe my friend,Rest in Peace,your labor here on earth is finished and now you can retire in Gods Kingdom.
Kerry Callaway
CWA,LOCAL 6222 (12222)
Kerry Callaway
April 3, 2016
Showing 1 - 7 of 7 results