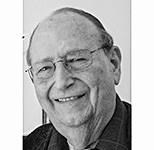 Joseph (Joe) Malina passed away peacefully on the afternoon of June 14, surrounded by his wife, children, their spouses and grandchildren. He lived a very full and accomplished life of almost 81 years devoted to his family, The University of Texas and his Catholic faith as an active member of the St. Austin Catholic Church community for over 50 years.

Joe was the second of nine children born in Brooklyn, New York on August 24th, 1935 to Joseph F. Malina Sr. and Mary Wesolowski Malina, both first-generation Americans born to Polish and Czechoslovakian immigrants.

Joe began his life-long dedication to his work and education early on, receiving a Bachelor's degree in Civil Engineering from Manhattan College followed by M.S. and Ph.D. degrees in Civil Engineering (Sanitary Engineering) at the University of Wisconsin at Madison. He moved to Austin in 1961 and began his 53 year career at the University of Texas at the Cockrell School of Engineering. He officially retired in the fall of 2012, and continued to mentor and supervise students until the end of 2014.

Joe leaves a lasting legacy as an educational and industry leader, and a respected professional engineer in the field of wastewater treatment. During his more than half a century at UT Austin as an environmental and water resources engineering professor, he supervised 192 graduate students, including 26 PhD students and consulted with over 70 companies. Many of his graduate students have been instrumental in terms of design and operation of wastewater treatment plants throughout the world, and so have helped the environment and society. These accomplishments rightfully earned him high honors in his profession, including awards from the Texas Society of Professional Engineers, American Academy of Environmental Engineers, American Water Works Association, Water Environment Association of Texas, Water Environment Federation, American Society of Civil Engineers, and many others.

After moving to Austin, he met his wife Ida and they were married on January 9, 1965. They were blessed with 51 years of marriage and a life centered around children, family and faith.

Visitation will be held Friday, June 17 from 5-7pm at Weed-Corley-Fish Funeral Home, 3125 N. Lamar. A funeral mass will be celebrated at St. Austin Catholic Church on Saturday, June 18 at 10am followed by a reception. Interment will follow at Austin Memorial Park at 2pm.

Richard Milos
Richard Milos
Friend
June 13, 2018
Dear Chris, what an inspiration along with profound and sincere fortitude exhibited by your brother Joseph. I am to believe this kind of spirit and love is a common thread throughout your wonderful family. I see this in your persona and spirit. My prayers and wishes for God's spirit will forever reside in your memories and thoughts regarding Joseph's transition to The Father's Home. Fondest regards and Condolences to you and the family. Al Gibson
Alton Gibson Jr
Friend
July 6, 2016
I'll miss Joe's great wisdom, sense of humor, and rolicking laugh. He was one of my earliest friends and mentors when I joined the UT faculty in 1970, and that's continued over four decades. Donna and I send our condolences to Ida and the family.
Phil Schmidt
Friend
June 29, 2016
Ida, we went to St. Austin's school and church when we were in elementary school in the '70's. We remember when Joe was a reader in church. We also remember your family being very involved in the school and church. We are sorry to hear about Joe. Our thoughts and prayers are with you and your family.

Richard, Agnes, Ricky, Beverly, and Tracy Martin
June 27, 2016
The passing of a great man. Am so grateful for the generosity and hospitality shown to me by him and his entire family when I was a student at UT back in the early 80's. Was fortunate to participate in family events at St. Austins in my capacity as music person there. Was my hope-away-from-home during those times. My condolences to all. -Philip Dixon
Philip Dixon
Friend
June 22, 2016
I have many memories as I was growing up in Brooklyn with Barbara's big brother, Joe. My thoughts and prayers are with all of you.
Georgeanne Teutschman Schopp
Friend
June 22, 2016
To the Malina family,
Joe attended Padua with my husband Joe...have many fond memories of Joe and his family. Joe was in a play at Padua...Joe was brother orchard and my Joe was the bartender...I know my uncle, fr.claude (rector at Padua)was close with the Malina family and thought very highly of Joe...our deepest sympathy to all the Malina family.....Joe and Jacquie Dancheck
Jacquie Dancheck
Friend
June 21, 2016
Ida, my deepest sympathy for you and your wonderful family. I consider myself lucky to have known Joe and know that he will be hugely missed. My thoughts are with you.
Scott Murray
Friend
June 21, 2016
Ida, I am so sorry to hear about Joe's passing. Prayers and sympathy to you and your family.
Donna Oberpriller Stevens
Classmate
June 19, 2016
Thank you Joe for being my professor, teacher, encourager, mentor, and close friend for 54 years. Dearest Ida Florence and I pray that the Holy Spirit will comfort and strengthen you and the family. We love you.
Glenn and Florence Johnson
June 19, 2016
Dear Ida,

Please know that Nick and I are thinking about you and you family.during this difficult time. We send you our love along with our prayers.

Janet Grandinetti
June 18, 2016
I was very sorry to hear about the great loss to the Malina family. On behalf off myself and my family I am sending the most sincere and deepest condolences. I know Joe was a very close friend of my Dad, Frank H Czajkowski (d. 3/12/2016), and they shared many Padua High School and non-Padua High School memories. I am certain my Dad and Joe have reunited in heaven by now. Joe will be in my prayers. -Judi (Czajkowski) Rovinelli, Trumbull, CT
Judi Rovinelli
Friend
June 18, 2016
Dear Ida and family, we are so sorry for your loss. Joe was our mentor and friend and he leaves a legacy of excellence in the engineering community. You are in our prayers. May God fill you with comfort and peace at this difficult time. Garabed and Francia Harutunian.
Garabed and Francia Harutunian
Friend
June 18, 2016
Our deepest condolences to the Malina Family. Praying for peace and comfort for you.
Anne-Marie (Berg) Hagemeier
Friend
June 18, 2016
Kristyn and I went to high school together. I remember Dr. Malina and am so sorry to read that he has passed. We lost my own beloved father in January so I know the sadness you are all feeling. My thoughts are with the entire family at this difficult time. Hold fast to your wonderful memories.
Kelly Crook
Friend
June 18, 2016
I loved Dr. Malina, and I will always miss him. During my senior year in high school, I was on my recruiting trip to play football for UT. In 1969, Dr. Malina had told the athletic dept. that he would volunteer to talk to any recruit that wanted to be an engineer, so they set me up with him. It was a great meeting, and little did I know then that he would ultimately be chairman of my graduate committee, a wonderful mentor, and a great friend. Much because it of him, I chose to make my career in environmental engineering, work on the design of over 50 wastewater treatment plants, and mentor several young engineers who are leaders in the industry today. His legacy continues. His impact on environmental engineering worldwide, and especially at UT-Austin, cannot be overstated. Rest in peace, Doc. You were the best.
Pat Hogan
Friend
June 17, 2016
Dear Ida and all the Malina family, I am so sorry for your loss. You are all in my prayers at this difficult time.
Jeanine Corroa
June 17, 2016
I have lost a truly great friend. There are so many wonderful memories of Joe and I discussing polish recipes and him and Ida bringing samples to church on a Sunday for me to enjoy and I promise you I did. Being invited to there family gatherings and getting the opportunity to meet a fantastic family is very special to me. To Ida and the family I send all my love and to Joe I can say that God has a special kitchen in heaven for you to continue your fabulous cooking. God Bless
Richard Milos
Friend
June 17, 2016
The Manhattan College alumni community shares the grief, and is now praying for our fellow alumni and the family at this time. The Alumni Office has been informed. As well as the Jasper Jottings community that I personally can reach. We are all a little poorer now. "No man is an island, entire of itself ... any mans death diminishes me". We are sorry for your loss.
fjohn reinke (mc1968)
June 17, 2016
I feel that no words can be sufficient at this time. Sending you prayers, hugs, and thoughts of healing.
Jason Gray
Friend
June 17, 2016
So many of us who worked with Joe and took his classes share in your loss. I remember with fondness our energetic exchanges when he was the Chair of the CE Department and I worked for him. And even now, though I have worked in drinking water for my career, the grounding I received from Joe's class in wastewater treatment has served me well when I've been pushed to the dirty water side! I'll be thinking of you all and wishing you peace.
Sarah Clark
June 17, 2016
Joe Malina was a true professional who contributed much to his chosen field. He was a good friend and will be missed by all who were fortunate to know him. I have enjoyed knowing Joe through the years and especially as a member of the Water Environment Association of Texas. Our sympathy goes out to his family. Glenn Longley, Retired Distinguished Professor, Texas State University.
Glenn Longley
Acquaintance
June 17, 2016
I am so blessed to have a brother-in-law who was dedicated to God, Family and work. He set a wonderful example for his siblings and loved ones to follow. My love and prayers to you all. Barbara XO
Barbara Malina
Family
June 17, 2016
Dear Malina family, our prayers are with you and your family. I wish we would have had the opportunity to meet Dr. Malina, he sounds like an extraordinary man, a great husband, father, brother, and friend. I am a distant friend of Mary & Jaden. God Bless you all.
-Sandra Urbina-Martin
Pearland, Texas
June 17, 2016
Sandra Urbina-Martin
Friend
June 17, 2016
Ida, my thoughts and prayers are with you and your family.
Lynn Neely
Friend
June 17, 2016
Dear Malinas, Rankins and Biscoes,

I am sorry for the loss to your family. I will miss seeing Mr. Malina at Mass on Fridays, he always had a smile!
Georgia Johnson
Acquaintance
June 17, 2016
Dear Ida, We are so sorry for you in this difficult time Please accept our deepest condolences If there is anything we can do to lighten your journey please just ask love Helen and David Maidment
Helen and David Maidment
Friend
June 17, 2016
Ida and family, I am so sorry to hear of the passing of Joe. May you be surrounded by the comfort of family and friends during this difficult time. Keeping you in my thoughts and prayers. Barbe Mariotti
Barbe Mariotti
Friend
June 17, 2016
Ida, Please know you and your family are in our thoughts and prayers. Fond memories of you and Joe with Fr Scott. May you have comfort in all your love and memories shared.. May the Lord bring you comfort and peace in your time of loss. Love Barb and Bob Emerson
Robert Emerson
Friend
June 17, 2016
Dr. Malina was a great civil engineering professor of mine when he was just starting out with his instruction career at UT Austin. Then later, Joe was a dear friend and neighbor of ours after my college career was ended by graduation. May his dear wife and family be comforted by our gracious God in his loss.
Ralph K. Banks
Teacher
June 17, 2016
Dear Malina family, Our family is keeping you all in our thoughts and prayers.
Paul and Mary Alice Partida
Friend
June 16, 2016
Showing 1 - 31 of 31 results