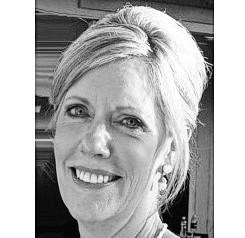 Mary Lou Clark died peacefully, surrounded by her family and dogs, on February 12, 2013, after a courageous and hard-fought forty-three month battle with cancer.

Mary Lou is survived by her husband, Edward Clark of Austin; son, E. Will Clark, M.D., and his wife, Nora Clark, of Dallas; son, Neale Clark, M.D., of Atlanta, and his fiance, Haley Singer of Houston; daughter, Kelley Clark of Austin; sisters and brothers-in-law, Diane and Ron Ring and Nancy and Tom Potts, all of Waco; sister-in-law, Sally Clark Adamson, and her husband, Jim Adamson, of Granbury; brother-in-law, Mel Owen of Fort Worth; numerous nieces, nephews, and grandnephews; and the family dogs, Louie and Yoshi, and granddogs, Joey, Conan, and Rae. She was preceded in death by her parents, Robert Wayne ("Bob") and Louise McCollum of Waco; her in-laws, Herman Kelley and Sarah Clark of Fort Worth; and her sister, Sandy McCollum Owen of Fort Worth.

Ever energetic and driven, Mary Lou will be remembered for her commitment to and involvement in the lives of her three children, willing to help them with any personal, athletic, or academic endeavor; her wonderful thirty-three year marriage to the love of her life, Edward; and her perseverance to accomplish anything, from becoming a CPA and an attorney to running the 1982 Houston Marathon and building three custom homes and remodeling three more.

Mary Lou was born on September 19, 1953, in Dallas, Texas to Bob and Louise McCollum, but moved to Huntsville in 1955. The family moved to Waco when Mary Lou was in seventh grade, and she graduated from Waco Richfield High School in 1971. Mary Lou graduated from Sam Houston State University in Huntsville with honors, where she received a BBA in Accounting and was a proud member of Zeta Tau Alpha.

After college, Mary Lou became a CPA and attended Baylor Law School in Waco, where she discovered her love of waterskiing, and graduated with a JD in 1978. Following law school, she moved to Houston and took an accounting position with Arthur Andersen, where she met her husband, Edward, also an accountant with the firm. Mary Lou and Edward went on their first date on Valentine's Day in 1979. After two years with Arthur Andersen, Mary Lou moved to Shell Oil Company, using both her accounting and legal backgrounds.

Mary Lou and Edward married in Waco on October 18, 1980, and bought their first home in Houston 1981. In late 1982, Mary Lou and Edward moved from Houston to Austin, and they had their first child, Edward Williams ("Will"), two months later. While in Austin, Mary Lou began her long career of practicing bankruptcy law. She joined the Junior League of Austin, and the family joined Westlake Hills Presbyterian Church, where they were active members. Two more children were born in Austin, son Neale and daughter Kelley. The family moved Shreveport, LA, for ten months in 1990, but the Clarks soon returned to Westlake Hills, where they lived for another seven years.

In the summer of 1997, the Clarks left Austin for Fort Worth. While in Fort Worth, Mary Lou continued to practice bankruptcy law and was very involved with her children's school, Trinity Valley School, being a member of the Parents' Club and the Athletic Committee of the Booster Club and serving as team parent of the cross county and track and field teams. In Fort Worth, the Clarks joined University Christian Church, where Edward and Mary Lou were regular members of Dr. Gilbert Davis's Sunday school class.

In 2007, Mary Lou and Edward moved to the Highland Lakes area of the Hill Country. The Clarks lived on beautiful Lake LBJ outside of Marble Falls, Texas. While in the Highland Lakes, Mary Lou continued to practice bankruptcy law, served as a court-appointed attorney in child protection cases, and joined the Highland Lakes Bar Association, where she enjoyed participating in the "Lady Lawyers" book club. In the summer of 2010, the Clarks celebrated the marriage of their eldest son, Will, to Nora Hudson of Dallas, at Horseshoe Bay.

Unfortunately, later in the summer of 2010, Mary Lou was diagnosed with Stage IV neuroendicrine cancer. She received wonderful care from Dr. Glenn Preston in Marble Falls for three years, before the Clarks decided to move back in Austin. In the late spring of 2013, Mary Lou and Edward sold their house on the lake and moved to Tarrytown in Austin. During her forty-three month battle with cancer, Mary Lou celebrated four different graduations of her children, the engagement of her son, and her sixtieth birthday, and Mary Lou and Edward celebrated their thirtieth wedding anniversary. In February 2014, Mary Lou finally lost her battle.

Professionally, Mary Lou was a member of the State Bar of Texas, the Bankruptcy Law Section of the State Bar of Texas, the Austin Bankruptcy Bar, the Highland Lakes Bar Association, and the Texas State Society of CPAs. Mary Lou was also a member of the Trinity Valley Trojan Booster Club, Trinity Valley Parents' Club, Camp Longhorn Alumni & Special Parents organization, the Longhorn Foundation, and the Junior League of Austin. She was a lifetime member of Zeta Tau Alpha, the Baylor Law Alumni Association, and the Sam Houston State University Alumni Association.

A memorial service was held on Saturday, February 15, 2014, at Westminster Presbyterian Church in Austin, Texas. In lieu of flowers, please consider a contribution in memory of Mary Lou to: Trinity Valley School of Fort Worth (www.trinityvalleyschool.org), The Canary Foundation (http://www.canaryfoundation.org), or The American Cancer Society (www.cancer.org).

Published by Austin American-Statesman from Feb. 16 to Feb. 17, 2014.
To plant trees in memory, please visit the Sympathy Store.
MEMORIAL EVENTS
Feb
15
Memorial service
Westminster Presbyterian Church in Austin
TX
MAKE A DONATION
Please consider a donation as requested by the family.
MEMORIES & CONDOLENCES
8 Entries
We are so saddened to hear of your loss of another dear sister! It is almost too much to bear! You girls were all so special and will always be remembered with much love! God bless!
Grace and Harry Bohan
February 18, 2014
So very sorry for your lost our prayers will be with your family & friends ....
Rocky & Debbie Ring
Canyon Lake ,Texas
Rocky & Debbie Ring
February 18, 2014
Ed, it saddens my heart to hear of your loss. My prayer is that God will give you peace, comfort and strength at this time of sorry.

Lynda Calloway
February 17, 2014
You and your family are in my prayers. I pray for peace and comfort for you in the days and weeks to come.
Cyndi Miller
February 17, 2014
My condolences to your family,. I hope in time comfort can be found in reading Psalm 68:19,20.
February 16, 2014
Edward, I was so sorry to hear of your wife's passing from Virginia Hayes Presnall. Please know you and your family are in my thoughts and prayers during your time of sorrow.
Nancy Ennen-Schaefers
February 16, 2014
I was so sorry to hear about this. I remember your sweet family so well from WHPC, preschool days, and Mary Lou from Junior League. Prayers for your entire family.
Danice Sockler
February 16, 2014
Ed: I was devastated for you when I saw this! My deepest sympathies go to you and your children. I had no idea she was so sick. Take care of you too! She was a lovely person. I am so glad I got to meet her. Sue Watts
Sue Watts
February 16, 2014
Showing 1 - 8 of 8 results