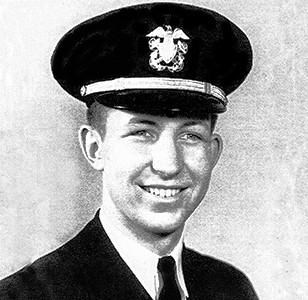 Paul grew up in Texas, New Jersey and, for eight years, in Chile, returning to El Paso from Chile at age 15. Upon graduating in 1942 from El Paso High he entered Texas A&M (Class of '46) and graduated in Chemical Engineering in 1948 having spent an intermediate two years in the U.S. Navy during WWII, serving at sea in the Pacific aboard the USS EPCE(R) 855. He remained in the U.S. Naval Reserve for a total of 25 years, retiring with the rank of Commander.

He met his wife in Waynesboro, Virginia while working summers at the DuPont laboratory where she was a research engineer. At the time, he was studying for his M.S. (1949) and Ph.D. (1952) in Chemical Engineering at Princeton University. Paul and Ellen were married on June 15, 1950 at her parents' home in Denver, Colorado.

Upon receiving his Ph.D., Paul began a 34-year career with Shell, starting in research and moving through many posts of different types and levels in various locations in the U.S. His Shell career also included two years as Director of Supply and Refining for Compañía Shell de Venezuela in Caracas. He retired from Shell in 1986. His final position was that of Vice President for Health, Safety and Environment for Shell Oil Company in Houston, Texas. During all their many moves, he had the staunch, loving support and inspiration of his wife, Ellen, to whom he was always deeply and lovingly grateful. Paul led an active retirement as a member of several technical and scientific boards, including the Executive Committee of the Science Advisory Board of the U.S. Environmental Protection Agency in Washington, D.C. He also taught at the University of Houston, as a visiting professor and engaged in other professional activities. He and his wife enjoyed travel to other countries, including two visits to Chile and one to Venezuela. Paul belonged to several scientific and professional societies, those closest to his original discipline being The American Institute of Chemical Engineers and The American Chemical Society. He was also a member of three honorary scientific, technical and scholarly societies, Sigma Xi, Tau Beta Pi and Phi Kappa Phi.

As a representative of his company, Paul worked with the American Petroleum Institute as well as other trade associations and was one of the founding directors of the Chemical Industry Institute of Toxicology (now The Hamner Institutes for Health Sciences), whose laboratory is in Research Triangle Park, North Carolina. Also as a representative of his company, he was one of the founding directors of the American Industrial Health Council (now disbanded, its work completed). In the early 1980s, Paul worked with others to strengthen a new society, the Society for Risk Analysis, serving in different capacities including that of the Society's president and, later, as one of the area editors of its journal. He also became a Fellow of the Society. He served for many years on the boards of two organizations at Texas A&M University, the Texas A&M Research Foundation and the Texas Institute for Advancement of Chemical Technology, Inc. In gratitude to Texas A & M University for its very positive influence on his life, Paul and his wife established the Paul and Ellen Deisler Graduate Fellowship in Chemical Engineering at Texas A&M University. Subsequently, Paul also established fellowships at both Princeton University, and at the University of Colorado at Boulder, the second in the name of his wife, a Chemical Engineering graduate of that school.

During his lifetime, Paul published scientific articles on a variety of subjects, the most numerous being in the area of cancer risks in the work place, and he edited a book on the last topic. His last article was published in 2011 although he considered himself as "retired" from professional work in 2005 with the publication of two histories, with two other authors, of the founding and subsequent development of the Society for Risk Analysis. He has also written several non-scientific books, including "Encountering Aggieland in 1942," and he leaves several works to be finished by his children. In his last years, he continued to enjoy reading about scientific progress, lecturing on the origin of the multiverse, writing the occasional letter to an editor to build his reputation as a "grumpy old man," improving his knowledge of Spanish and French and traveling with his eldest daughter. He also devoted himself to ensuring that his beloved wife received the best care and comfort possible in her nursing home until her death.

Those wishing to memorialize Paul may send memorial gifts to a charity of their choice, to the Congregational Church of Austin (UCC), 408 W. 23rd St., Austin, Texas, 78705, to the Unitarian Universalist Church of Corpus Christi, 6901 Holly Rd. Corpus Christi, Texas 78414, to the Artie McFerrin Department of Chemical Engineering at Texas A & M University, Jack E. Brown Engineering Bldg., Room 200, 3122 TAMU, College Station, TX 77843-3122 or to the Department of Chemical and Biological Engineering, Room A217 Engineering Quad, Princeton University, Princeton, NJ 08544.

To view tribute, please visit www.seasidefuneral.com.
To plant trees in memory, please visit our Sympathy Store.
Published by Austin American-Statesman from Aug. 16 to Aug. 17, 2015.
MEMORIAL EVENTS
No memorial events are currently scheduled.
To offer your sympathy during this difficult time, you can now have memorial trees planted in a National Forest in memory of your loved one.
Funeral services provided by:
Seaside Memorial Park & Funeral Home
MAKE A DONATION
Please consider a donation as requested by the family.
MEMORIES & CONDOLENCES
Sponsored by anonymous.
2 Entries
From the Holzinger family of California who are longtime friends of the Deisler's since the 60's when they lived two doors down in Orinda, and upon their return to Moraga, we offer our condolences to the loss of dear Paul Sr. Thankfully we have remained in touch over the years and myself and Conrad get together annually. Much love and support from all of us Holzingers.
Mark holzinger
August 17, 2015
Sending my condolences to the family. May God give you strength and peace during this difficult time. (Psalm 29:11)
August 11, 2015
Showing 1 - 2 of 2 results